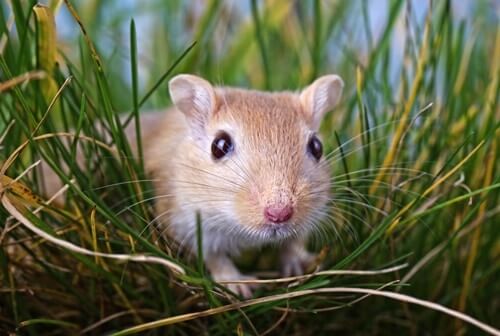 Gerbils are small and innocuous, so you might be surprised to discover they’re illegal in some parts of America. Certain states, and some countries around the world, have banned them completely.

Gerbils are illegal to prevent them from becoming an invasive species. Gerbils like dry deserts, which is why they’re illegal in California. Wild gerbils here could make native species extinct. Hawaii isn’t dry, but it is vulnerable to many invasive species.

If you’re found owning or selling gerbils in California or Hawaii, you will face a large fine. And these punitive laws aren’t likely to change.

Federal law is the law that applies across the whole country. It’s responsible for some of the most important laws because they apply to every state. There are no federal laws banning gerbils as pets.

State law is different, depending on which state you live in. Almost all states permit gerbils. Some states even specify in their laws that there’s no problem with owning one, while others don’t mention them on their banned animals’ list. However, gerbils are illegal in Hawaii and California.

Gerbils aren’t illegal under Federal law in the United States. The law can ban ‘exotic’ pets, which come from other parts of the world. These pets can be dangerous, either to people or wildlife, which is why they’re banned.

Despite being from completely different parts of the world, like Mongolia, gerbils aren’t considered exotic. That’s because they were domesticated decades ago and have been common pets ever since.

Another reason why certain exotic animals are banned is rabies. Rabies is a disease that spreads from animal to animal or from an animal to a person. It’s fatal unless you’re vaccinated against it and can be brought to the country by imported animals. But gerbils aren’t imported from overseas anymore, so they aren’t banned for that reason.

What States Are Gerbils Illegal In?

There are two states that gerbils are illegal in. These are Hawaii and California. There’s a blanket ban on importing gerbils, and many other animals, to these states. That applies whether you’re an owner or a breeder, although you may get a permit if you’re doing scientific research for an institution.

If you live in one of these states and own a gerbil, you’re breaking the law. That applies if you’re breeding and selling them, too. Depending on what you’re doing with gerbils in these states, you could face a hefty fine.

Are Gerbils Illegal in Hawaii?

Gerbils aren’t allowed in Hawaii. You can’t buy or sell them in the state, and you can’t import or export them either, except under special circumstances.

So, if you have a pet gerbil and you live in Hawaii, be careful. If the state government found out about your gerbil, it would take your pet away and keep it in quarantine.

What Law Bans Gerbils in Hawaii?

Hawaii has one key law related to the import and ownership of non-native animals, with many different sections. The law is Chapter 4-71, Hawaii Administrative Rules, and is entitled “Plant and Non-Domestic Animal Quarantine, Non-Domestic Animal Import Rules.”

The section is related to the prohibition of gerbils is the List of Prohibited Animals. There are dozens of banned animals, including amphibians, reptiles, birds, and mammals.

The part of the law under which gerbils are banned states that all the rodents in the family Cricetidae aren’t allowed into Hawaii. This is a big family of species, totaling 608.

The law does go on to say that all the rodents in the family are banned, except for five species that can be imported for government research. One of these species is the Mongolian gerbil.

So, it is possible to import gerbils to Hawaii if you’re doing research. But even then, you’d need a permit, and gerbils aren’t a common research animal anymore.

Why Are Gerbils Illegal in Hawaii?

Hawaii has some of the strictest animal importation laws anywhere on the planet. Their laws are certainly more stringent than those of other parts of the U.S.

The reason for that is that Hawaii has a unique ecosystem. The island chain that is the state of Hawaii only formed around five million years ago. Because of this recency and the difficulty of accessing the islands from any other landmass, the wildlife is different.

That’s because it evolved here, untouched by people, for millions of years. Hawaii is home to many species that aren’t seen anywhere else, particularly birds.

Unfortunately, these species are all at risk. They are, by nature, only found here and nowhere else. If gerbils were let loose here, they could take over the habitats of other animals, out-competing them and leaving them extinct. They would feed on plant species not found elsewhere, too.

The worry is that even one group of gerbils could quickly get out of control. Because there’s so much food available for them and so few predators that could eat them, they could take over every island. That’s something the state legislature certainly wants to avoid.

Will Gerbils Ever Be Legal in Hawaii?

Gerbils will never be legal in Hawaii, no matter what. Hawaii already has enough trouble trying to keep its ecosystem safe from other animals like snakes, certain cat breeds, and more.

These laws are only going to get stricter rather than more permissive. Recently, for example, Hawaii banned the use of performing animals for entertainment purposes. This relates to larger animals like elephants and bears, which aren’t banned from such use in other states.

The full list of banned species on the Hawaiian government website is comprehensive. It includes both plants and animals, relates to the import of soil, the function of quarantine, and both research and exhibition.

Are Gerbils Illegal in California?

It’s illegal to import, transport, or possess even one of them in the state. This means you can’t buy or sell them anywhere. You also can’t bring your pet gerbil across California’s state lines.

California is far from the untouched paradise that Hawaii is, so you may wonder why they’re banned here, too. There are good reasons.

What Law Bans Gerbils in California?

Gerbils are banned in California under Title 14 of the California Code of Regulations, Section 671. This law states that “It shall be unlawful to import, transport, or possess live animals restricted in subsection (c) below except under a permit issued by the department.”

The law makes an exception for some domesticated species. Hamsters, for example, are banned too “except … Domesticated races of golden hamsters.” The same applies to domesticated rats, mice, and guinea pigs.

But it doesn’t apply to gerbils. Whether your gerbil is wild or domesticated, it’s not allowed in.

Why Are Gerbils Illegal in California?

Instead, gerbils are illegal here because it’s so similar to the gerbil’s natural habitat. The most common pet gerbils still have wild cousins who live in Mongolia. Their natural habitat:

The Californian state government is worried that much of the state is too similar to the gerbil’s wild habitat.

There are three main deserts in California: the Mojave Desert, the Colorado Desert, and the Great Basin Desert. Each of these places is dry and sandy, like the Mongolian steppe. There are lots of shrubs like sage, bursage, and big sagebrush that gerbils could feed on.

They’re worried that the gerbil could thrive here. If it did, it could decimate local populations of insects and shrubs. Their presence would create too much food for bigger predators, over-hunting other species and leaving them extinct.

What’s safer is to ban them altogether. Although, this raises the question of why other states with similar ecosystems haven’t banned gerbils too.

Will Gerbils Ever Be Legal in California?

It’s unlikely that gerbils will ever be allowed to live in the state of California. This environment will always be vulnerable to the incursion of new species.

You could argue that the pets wouldn’t get into the wild. After all, you’ll keep your pet safe and secure in its cage at home throughout its life.

While that might be true, it’s not true of everybody. Many people release their pets when they get bored with them. Or, they can lose them entirely by accident. If a female was abandoned or went missing, it could be pregnant and ready to have young. These young could begin a breeding colony.

According to the LA Times, the state likely won’t change its mind. Gerbils could take over the habitats of kangaroo rats, which are similar to gerbils and are in decline. This will always be the case.

Have Other States Banned Gerbils?

As of yet, no other U.S. states have banned gerbils. Currently, the practice is unique to California and Hawaii and shows no sign of spreading.

This is a surprise because many states have sandy or steppe-like environments where gerbils may thrive. These states, such as Arizona, Nevada, and New Mexico, may ban gerbils in the future. However, there are no plans currently in place to do so.

As for other states, there’s little reason to ban them. In colder northern states, gerbils wouldn’t have the correct conditions to survive. It’s too wet, there are lots of predators, and there may not be enough sunshine. It’s only in warm, dry states that they might thrive.

No matter where you live, you should ensure that your pets can’t escape. If they do, there is a small chance that they could form a wild breeding population. This has already happened with many other species of pets, especially reptiles. These invasive species threaten the native ones.