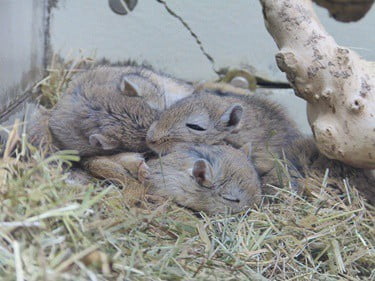 You’ve probably seen your gerbils grooming each other from time to time. It looks like they’re licking or nibbling at each other’s fur. Sometimes, you may hear your gerbils squeaking while grooming or purring.

Grooming is a normal gerbil behavior that indicates that gerbils are healthy and happy. When one gerbil grooms another, it establishes and strengthens social bonds. It’s a way for gerbils to show respect and trust for their clan members. The grooming process also cleans the fur and reduces body temperature.

Gerbils may also groom each other to assert dominance. Unfortunately, if one gerbil wants to emphasize its authority over another, it may over-groom the subordinate gerbil. This is known as barbering and can result in hair loss.

Gerbils Grooming Each Other

Grooming is the word used to describe when a gerbil licks or nibbles at its fur. Gerbils groom themselves as a way of keeping their fur shiny, soft, and free of dirt and debris. But gerbils groom each other as a social behavior, too.

If your gerbils are grooming each other, it’s a clear sign that they are getting on well. It means that they trust each other and see each other as good friends.

But what is the purpose of grooming? Gerbils groom one another for 4 main reasons. It helps to develop a social bond and establish a hierarchy of dominance. It helps to keep each other clean and parasite-free. Grooming also helps the gerbil clan to maintain the correct temperature.

Grooming Is a Bonding Experience

Gerbils are highly social creatures. In the wild, gerbils live in large groups called clans, which may have up to 15 members. Pet gerbils enjoy sharing their cage with other gerbils as a gerbil should never live alone.

Gerbils living in a pair or group will regularly engage in play and other social behaviors. Mutual grooming is one of the most important of these. Grooming is an effective way for gerbils to build and maintain strong bonds of friendship.

You may notice your gerbils making soft purring sounds during a grooming session. This is called bruxing. It won’t happen when a gerbil is grooming itself – only when being groomed by another gerbil. It’s how one gerbil tells the other that it’s enjoying the experience.

Gerbils that aren’t getting along well, or haven’t yet developed a bond, won’t groom one another.

To keep the peace in a wild gerbil clan, the members will establish a hierarchy of dominance. Grooming is a vital behavior to help establish and maintain this social order.

The same happens among captive (pet) gerbils. In mixed-sex groups, there will be a dominant breeding pair (male and female). In single-sex groups, one gerbil will assume the top position on its own. It may be the biggest gerbil, the oldest gerbil, or the one with the most dominant personality.

The dominant gerbil will regularly groom the other to remind it who’s boss. If only one specific gerbil ever grooms the other, it is most likely dominance grooming.

Dominance grooming often looks more aggressive and forceful than other types of grooming. The dominant gerbil may pin the other gerbil down to groom it. It may even over-groom the other gerbil, leading to hairless patches. We’ll discuss this in more depth later.

Although grooming is mostly a social behavior, it also plays a role in a gerbil’s physical health. Like many other mammals, gerbils groom themselves and each other to help keep their fur clean.

Gerbils come from dry climates, so they don’t wash in water. Grooming, along with rolling in the sand, is a gerbil’s alternative to bathing. Grooming helps to:

Gerbils often groom themselves to keep clean. However, they also help each other out by grooming hard-to-reach places.

Along with keeping the fur clean and parasite-free, grooming serves another important biological purpose. It plays a significant role in regulating a gerbil’s body temperature.

Every gerbil has a special gland behind its eyes called the Harderian gland. This gland naturally secretes a liquid called Harderian material. It contains pigments, fats, and sex pheromones.

When a gerbil grooms itself (or another gerbil), this substance exits the body through the eyes and nose. As it grooms, it spreads the liquid over the coat, from head to tail.

According to the New York Academy of Sciences, spreading Harderian material over the coat helps gerbils retain body heat in cold temperatures. Because it contains lipids (fats), it’s great at heat insulation. It also offers some protection against wetness and helps gerbils absorb more heat from the sun.

In hot weather, gerbils spread saliva over their coats instead. This helps them to cool down as the saliva evaporates.

When gerbils are too hot or too cold, they’ll groom each other as well as themselves. This will help the entire clan maintain a healthy body temperature.

Why Are My Gerbils Squeaking While Grooming?

Gerbils are normally quiet while grooming themselves and each other. However, some gerbils are more vocal than others. During a particularly intense grooming session, your gerbils may make little squeaking noises.

Most of the time, this is nothing to worry about. Gerbils often squeak out of happiness and excitement. The gerbil that’s being groomed is likely enjoying the experience and letting the other gerbil know.

Gerbils squeaking while grooming can also be a sign of pain, discomfort, or frustration. It could mean that the groomer is nibbling a little too hard. Or, your gerbil may not be in the mood and would prefer to be left alone.

Vocalizations are how gerbils communicate with one another. According to the Acoustical Society of America, gerbils can produce 13 distinct ‘syllables’ at a range of frequencies. Each noise has a different meaning. Gerbils can communicate emotions such as happiness, annoyance, and fear.

Unless your gerbils are fighting or attacking each other, there’s nothing to worry about. They’re probably just ‘chatting.’

Are My Gerbils Grooming or Fighting?

Social grooming in gerbils doesn’t always look peaceful and happy. So, you may be confused as to whether your gerbils are grooming or fighting.

Grooming isn’t an exact science, and sometimes gerbils don’t enjoy it, for whatever reason. For example, one gerbil may nibble too hard. Gerbils can also be opposed to dominance grooming if they’re competing to be the top gerbil.

It’s normal for one gerbil to chase the other around if it’s trying to establish its authority. You may also notice one gerbil attempting to hold the other one down to groom it. This is all a normal part of a gerbil’s dominance display. If your gerbils are truly fighting, you’ll notice signs such as:

Gerbils that are fighting will not cuddle up together, sleep together, or groom one another. Gerbils licking and nibbling each other gently is a good sign.

Is My Gerbil Over-Grooming?

Gerbils love to groom themselves and each other. It’s a great way to keep their fur clean, regulate body temperature, and foster a strong social bond. However, gerbils can sometimes become over-enthusiastic when grooming. They might groom too aggressively or too often.

Gerbils can over-groom both themselves and other gerbils in their clan. Over-grooming can result in bald patches and red, raw-looking skin.

Some medical conditions can also result in bald patches. For example, according to Nutrient Requirements of the Gerbil, a diet low in magnesium or salt can cause hair loss.

Alternatively, your gerbil’s cage may be too small or over-crowded. Gerbils can also become stressed in the presence of loud noises, ultrasonic sound, dogs, and cats.

When a gerbil over-grooms one of its cage mates, this is called barbering. Usually, only one gerbil (the dominant gerbil) will barber the other(s).

What Causes Barbering in Gerbils?

Barbering in gerbils can be alarming to witness. It can appear quite aggressive, with the ‘barber’ pulling out large tufts of fur from the other gerbil.

That being said, barbering rarely turns into a real fight. It’s part of how a dominant gerbil reinforces its authority over the rest of the clan.

Gerbils usually focus their barbering on the face, rear end, and upper tail areas. The groomed gerbil may protest by squeaking loudly or running away. It may also gently push the other gerbil away with its front paws.

Barbering in gerbils can have many different causes. For example:

It’s not always possible to stop your gerbils barbering. However, reducing stress and providing plenty of enrichment activities can help.

If barbering escalates into a fight, you’ll need to separate your gerbils into different cages. Some gerbils struggle to get along with each other and may declan even if they were previously close.

Why Is My Gerbil Grooming Me?

You may find that your gerbil grooms you from time to time, as well as itself and its cage-mates. This is especially likely if you have a strong, loving bond with your gerbil. The more time you spend interacting with your gerbil, the higher the likelihood that it will groom you.

If this happens to you, you might wonder: what does it mean when my gerbil licks my hand or nibbles me? Is my gerbil trying to eat me or tell me it loves me?

In reality, it’s an instinctual behavior. Gerbils love to nibble on things – it’s how they explore the world and keep their teeth healthy. Your gerbil may nibble you out of pure curiosity, especially if you smell like food.

Your gerbil may also groom you because it considers you part of its clan. It’s your gerbil’s way of showing you that it trusts you. It may even groom you in an attempt to establish a hierarchy of dominance.

Gerbils may also nip their owners to communicate their unhappiness. A nip is a short, sharp bite that’s different from the gentle nibbling seen in grooming. If you’re doing something your gerbil doesn’t like, it may nip you to tell you to stop.