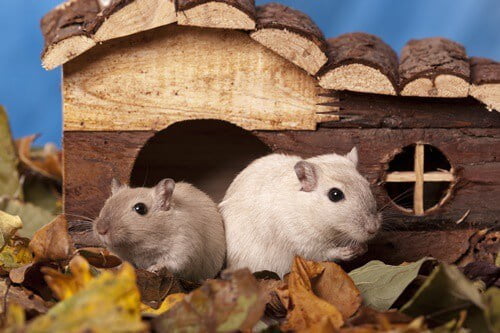 If you keep two or more gerbils together, you’ll notice your gerbils play fighting occasionally. This is normal behavior and completely harmless. Real gerbil fighting is rare, but it can be dangerous if you don’t intervene.

Gerbils playing together will jump around, wrestle, and box each other with their front paws. Gerbils fighting will aggressively bite one another around the head and tail areas, usually drawing blood. Fighting gerbils should be separated before one of them gets hurt.

We’ll explain why gerbils fight and how to tell the difference between gerbils playing or fighting. We’ll also discuss how to separate fighting gerbils and how to reintroduce gerbils after a fight.

Table of Contents show
1 Why Do Gerbils Fight With Each Other?
2 What Is Gerbil Declanning?
3 Are My Gerbils Playing or Fighting?
3.1 Signs Gerbils are Play Fighting
3.2 Signs Gerbils Are Fighting
4 What Do I Do If My Gerbils Are Fighting?
4.1 How to Separate Fighting Gerbils
4.2 How to Reintroduce Gerbils after a Fight
4.2.1 Split Cage Method
5 How to Stop Gerbils Fighting
5.1 Related Articles:

Why Do Gerbils Fight With Each Other?

Gerbils are social creatures and can’t be housed alone. To thrive and be happy, they must be kept in groups of at least two. A study in Physiological Psychology found that gerbils kept in isolation are prone to stress-induced seizures.

Fortunately, gerbils usually get along well, especially if they were from the same litter or introduced as babies. They form strong bonds, sleep together, and play together daily.

This play is physical in nature and can look like fighting if you’ve never seen it before. But gerbil play fighting is healthy and normal and never results in injury.

Sometimes, though, gerbils fight for real. True gerbil fighting is rare in bonded pairs, but it can happen at any point, often without warning. It’s more common in female gerbils than males.

Real fights can result in injury and death. The reason for most gerbils fighting is because they have gone through a process called declanning.

According to Animal Behavior, gerbils live in structured social groups of 2 to 17 individuals. These groups are called clans. Each gerbil within the clan has a different social ranking.

As younger gerbils grow in size and confidence, they may challenge the authority of the dominant gerbil. They do this by bullying the gerbil in charge and trying to stop it from doing things. When this happens, the challenged gerbil will either:

Declanning can happen to pet gerbils regardless of how long they have been living together. The more gerbils there are in the clan, the more likely it is to happen.

Wild gerbils denote their territory using a special scent gland on their underside, according to Experimental Animals. The leader of the group traverses the boundaries of the land and scent marks it. If any gerbil that is not part of the clan tries to trespass, it will chase them away.

Unfortunately, once pet gerbils declan, the loser cannot leave to find its own territory. It is forced to stay in the same gerbilarium as the winner. This creates tension, which can lead to gerbils fighting.

Are My Gerbils Playing or Fighting?

Real gerbil fighting indicates your gerbils have declanned. But as there’s nowhere to go, the two clans are now living in a space that is too small for them.

Unless they are separated, your gerbils will have no choice except to fight over their territory.

Fighting is a gerbil’s way of saying, “get out of here – you aren’t welcome.” Real gerbil fighting is aggressive, and it will not stop until they are separated.

Gerbils play fighting, however, is an entirely different thing. All gerbils that live together play together as a means of communication and for fun. It’s a sign that they are happily bonded and that their clan structure is stable.

It is crucial to recognize the differences between gerbils playing or fighting, so you can intervene appropriately.

Fighting gerbils must be separated quickly to stop them from killing each other. But if they are playing, separating them would be a big mistake.

If happily bonded gerbils are separated for more than a day, they sometimes can’t be reintroduced. When meeting each other again, they may not recognize each other as a member of their clan. This can lead to fighting when there wasn’t any in the first place.

Play fighting in gerbils is a completely harmless behavior. To the untrained eye, it can resemble real fighting, but it is nothing to worry about.

Gerbils that play together are happy gerbils. When they are not play fighting, they will exhibit friendly behaviors such as sleeping together and grooming each other.

Play fighting is often interspersed with cuddling, grooming, and toilet breaks or water breaks. It is usually quiet and doesn’t result in injuries or blood being drawn.

If you aren’t sure whether your gerbils are playing or fighting, try offering them food. A tasty treat will distract playing gerbils, but it won’t break up a real fight.

Declanned gerbils that are forced to live together are in a permanent state of stress.  This is easily seen in their body language and behavior.

They will seem on-edge and nervous most of the time. This will be especially true for the gerbil that has been overthrown and kicked out. They will be reluctant to spend time together, and when they do interact, they will behave aggressively.

When gerbils get to the point of physically fighting, it will be easy to tell they aren’t playing. Here are the signs of a real gerbil fight:

After a real fight, your gerbils won’t go back to normal as if nothing happened. They will remain stressed out and will eventually fight again.

What Do I Do If My Gerbils Are Fighting?

If you notice your gerbils fighting, act fast. Once their arguing has reached the point of fighting, it can get nasty quickly.

Gerbils fighting to the death is, sadly, not uncommon. It’s because they are confined to the same cage and can’t get away from each other.

Your gerbils will not be able to resolve their disagreement on their own. They don’t understand the concept of ‘forgive and forget.’ Once your gerbils have declanned, they won’t stop fighting until one of them leaves or dies.

As soon as you notice that your gerbils have been fighting, remove one of them from the gerbilarium. You must do this straight away. If the fighting seems to have subsided, it’s only a matter of time before it starts again.

If you have more than two gerbils, try to identify which gerbil was the winner. The loser will have copious injuries around its tail end from being attacked as it ran away.

Remove the loser from the gerbilarium. Leave the other gerbil(s) that weren’t involved in the fight with the winner.

How to Separate Fighting Gerbils

Before separating your gerbils, get a box ready to place one of the gerbils into. All it needs is a water bottle, a little food, and a thin layer of bedding. This is going to be a temporary home while you sort out a permanent housing solution.

Fighting gerbils can be vicious. They will instinctively attack anything that comes near them.

So, before placing your hands into the gerbilarium, put on a pair of protective gloves. That way, if either of your gerbils tries to bite you, they won’t hurt you. Gardening gloves work well for this purpose.

Open the gerbilarium and place your hand in between the fighting gerbils. Gently push them away from each other.

Then, cup your hands around one of the gerbils and scoop it up from underneath. Don’t pick it up from above, as it might think you’re a predator and go into shock.

Set the gerbil down in the temporary home. You can then decide whether to keep your gerbils apart or try to reintroduce them.

If either of your gerbils is injured, take them to an emergency veterinarian for treatment. If a wound becomes infected, the gerbil could become seriously ill.

How to Reintroduce Gerbils after a Fight

Once two gerbils have fought to the point of drawing blood, they usually won’t be able to live together again. This is because the gerbils have gone through a process called “declanning.”

Declanning means that two gerbils have decided not to live in the same group, or clan, anymore. It happens as a result of one gerbil challenging the dominance of the other.

In the wild, declanning would not usually result in a physical fight. Once challenged, the less dominant gerbil would leave the clan. It would find a new home to live in and never see the other gerbil again.

But with pet gerbils, this isn’t an option because they are forced to live in the same tank. Unless you separate your gerbils straight away, declanned gerbils will inevitably fight.

Once declanning has happened, keeping the gerbils apart is usually the best option. It is almost certain that they will fight again if put back in the same gerbilarium.

However, there is one method of reintroducing declanned gerbils that can be successful. It’s called the split-cage method.

The split-cage method does not work if there are three or more gerbils.

But if you only have two gerbils, it can help teach them how to get along again. It’s worth trying if you don’t have the space or resources to keep a second gerbilarium:

After removing the divider, keep a close watch on your gerbils for the first 24 to 48 hours. If they start to fight again, separate them straight away. Start again from step 3.

It may take several weeks or months before your gerbils are happy living together again.

How to Stop Gerbils Fighting

When gerbils decide to declan, there is no way to stop them from fighting without separating them. Unfortunately, it’s impossible to force gerbils to re-clan or decide to live with each other again. They would never naturally do this in the wild.

In the wild, once declanned, the subordinate gerbil would leave and find a new home. Because this isn’t possible in captivity, it makes the aggressor angry. They will inevitably fight if they can’t get away from each other.

The only thing you can do is look for the signs of gerbil declanning. Then, separate the gerbils before they get a chance to fight.

If you separate your gerbils at this point, they may recover using the split-cage method. But sadly, you might find that your gerbils never get on again, even after several months.

If this is the case, the best thing would be to keep them in separate tanks permanently. Otherwise, their fighting may lead to serious injury or death.