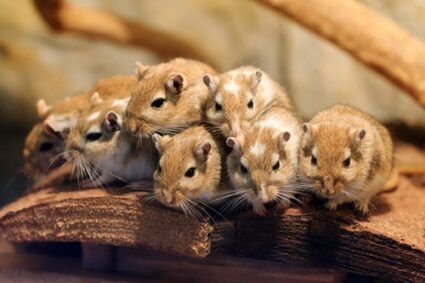 You will notice frequent fights, during which one gerbil tries to pin the other. Fights can get serious and involve the use of teeth. You may also notice squeaking, gerbils sleeping separately, and the losing gerbil will be excited to leave the cage. You must separate your gerbil group.

After declanning, you’ll need a new enclosure which has all the features of the old one. House the ‘losing’ gerbil here and pair it up. You can pair it with a sibling or with a new gerbil from the store. Here’s some advice on how to introduce new gerbils.

Table of Contents hide
1 What Is Declanning in Gerbils?
2 Why Do Gerbils Declan?
3 What Are the Signs of Gerbils Declanning?
3.1 Gerbils Consistently Fighting
3.2 Gerbils Squeaking
4 Severe Wounds
4.1 Pet Gerbil Biting All of a Sudden
4.2 One Gerbil Wants to Get Out
4.3 Gerbils Sleeping Separately
5 What to Do If Your Gerbils Declan
5.1 Related Articles:

What Is Declanning in Gerbils?

Declanning is a behavior related to the social nature of gerbils. Gerbils live in groups, also known as clans. This applies both in the wild and in captivity. Declanning is the term for when a clan split apart.

There are several reasons why gerbil clans split. They all relate to changes in the existing social structure. Declanning causes fights between gerbils. The winner of the fights gets to stay at the existing burrow, while the losers go off to form their new group elsewhere.

Check for the signs of declanning. That’s because gerbils are surprisingly vicious, especially towards ‘outsiders,’ i.e., gerbils that are strangers. They can even fight to the death.

Why Do Gerbils Declan?

Gerbils declan for many reasons, all related to the social structure of the gerbil group. Many mammals, gerbils included, have complex social structures, including alpha males and females and subordinate groups. Reasons they might fight and declan include:

What Are the Signs of Gerbils Declanning?

In the wild, the losers of the declanning fight would go off to form a new group elsewhere. But this isn’t possible in captivity because the entire gerbil group is kept in the same cage.

This raises a serious problem. Where the loser would like to run off, it can’t. It has to stay near the other gerbils it has fought with. This causes more fights, which become progressively more severe. Unless rectified, this will often result in the death of the loser.

The most obvious sign you should look for is fighting. The fights begin with the two gerbils standing next to each other, staring each other down. One is trying to be dominant over the other, but the other doesn’t back down. This instigates the fight.

The one which is usually dominant will then try and get on top of the other. This looks a little like one gerbil trying to mount the other. The pair may then push each other around, trying to gain the upper hand.

These fights will progress into a boxing match. After pushing each other, the pair will fall still. They will stand, not quite facing each other, ready to lash out. Each will be on its hind legs, trying to push the other and flailing with its arms.

To win, one must push the other over onto its back. The winner will then stand over it. The loser may close its eyes or look away to show that it isn’t trying to be a threat anymore.

Of course, this description doesn’t fit every fight. Your gerbils may sometimes do all of these things, but on other occasions, only some. There are other signs of fighting to look out for, too.

Unless you’re watching over your gerbils, you may not notice them physically fighting. Gerbils can be quite quiet when they fight. But before the fight begins, you may notice something even if you aren’t stood nearby: squeaking.

Gerbils are communicative animals. Living in social groups, they need a way to communicate with each other. Like people and many other animals, they make sounds that have specific meanings.

According to PLoS One, most of these noises are too high-pitched for people to hear. Studies show that gerbils communicate much more than owners realize because people can hear only some of the noises they make.

One kind of noise a gerbil can make is a loud, high-pitched squeak. This squeak is the fighting squeak. The two gerbils that are about to fight will try to intimidate each other with loud noises to win the fight before it starts.

The gerbil’s ability to communicate has even been tested in a lab. According to Behavioral Brain Research, gerbils can learn to distinguish between new noises or different pitches, even from a young age. Communication is clearly important to them.

Gerbils fight by trying to pin each other down. It’s like a wrestling match. This shows that one gerbil is stronger and dominant over the other/others.

A gerbil that loses this kind of fight would then run off to start its own clan elsewhere. Some of the group may join it in leaving. But in captivity, this isn’t possible unless you intervene and put the loser in a separate cage.

This is like a great insult, or a great challenge, to the dominant gerbil. Instinctually, it doesn’t understand why the other gerbil can’t get away. All it knows is that its power is still being challenged. This forces the fighting pair to fight harder.

The only other things that a gerbil can fight with are its teeth. Gerbils, like all rodents, have sharp and solid teeth. They can do severe damage when biting down hard. This can cause nasty wounds.

You may not see these wounds beneath the fur. But you will see the blood these bites cause. It will stain your pet’s fur and the bedding it sleeps on. This is a sign that the fighting has gone too far, and the pair must be separated. If you don’t tear them apart, the two could kill each other.

Pet Gerbil Biting All of a Sudden

Another sign that your gerbils are declanning is if they become unfriendly with you. Whereas normally, your pet would be happy to see you, now it’s defensive and nippy.

You may especially notice this when you reach into your enclosure to pick up one of your pets. It may be sitting in a tunnel, for example. You reach down to try and pick it up, but it bites you, which it usually wouldn’t.

This happens most frequently when you reach into an enclosed space. If your pet is in or next to its burrow or is in a corner, it may bite. Your pet should still recognize you and want to spend time with you if you let it see you first.

This applies both to the ‘winner’ and the ‘loser’ of the fight. Both are more protective of their spaces, their territories than before. This is a normal outcome of a fight over territory.

One Gerbil Wants to Get Out

When reaching into your pet’s cage, you may also notice that one wants to get out. Whereas, before, your pet was excited to get out, now it seems it can’t wait to escape. It will leap towards you when you reach in, scrabbling at the glass.

This is a symptom of keeping your gerbils in captivity. In the wild, the loser would long since have gone off on its own, or perhaps with one or two other gerbils, to form its own clan. But in captivity, this is physically impossible. It’s kept in the same cage until you intervene.

This means that the loser will want/need to get out of the cage. You will see this in action when:

This gerbil doesn’t feel like a part of the clan anymore. A gerbil that isn’t part of a clan won’t live in that clan’s territory.

The burrow is the heart of the gerbil social group. All the gerbils sleep in the burrow together to preserve warmth and to stay protected. Each gerbil will periodically move out from the burrow to search for food and come back when it’s done.

Only gerbils in the same social group can sleep in the group’s burrow. Any stranger gerbil would immediately be detected and fought off. After declanning, the same applies, and the loser will be fought until it moves away.

Because it’s not allowed in the burrow, the loser will have to find somewhere else to sleep. It can’t get out of the cage, so another burrow isn’t an option. The gerbil lacks places to sleep.

The loser will sleep in some other part of the cage, e.g., in the running wheel or corner. It won’t be allowed back into the burrow until they all get along again.

What to Do If Your Gerbils Declan

If you notice the signs of declanning, you have to take action. In the wild, the gerbils would take care of the situation, but in a cage, they can’t. So, it’s time for you to step in.

You’ll need to put the losing gerbil in another enclosure. You can see which one is the rejected one by observing its behavior. Sleeping separately is the most obvious sign. It will also be excited to leave the cage, more so than usual.

Take this gerbil and put it in another cage. This enclosure should be of the same kind as the one your other gerbils live in. It needs bedding, a running wheel, and drinking water like any other enclosure.

Move this cage away from the one the rest of your pets live in. They would still see each other, and while they couldn’t fight, this could still cause stress. The other side of the room, or another room entirely, would be fine.

Pair your pet up, as gerbils can’t live alone. This gerbil could be one of its previous cage mates or a new gerbil. Same-sex siblings get along well, so this could be an option for you.

You can then build another group around this new pair. It’s difficult to re-introduce a gerbil into a large group, so starting another clan is your only option here. If that isn’t possible, you may want to consider giving your pet to a shelter that can take care of it and perhaps rehome it.