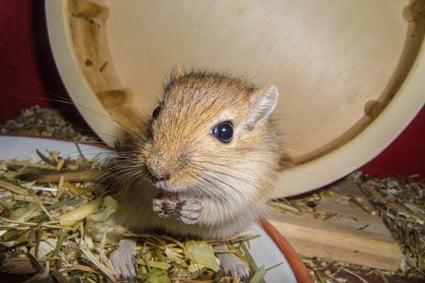 Gerbils are clean creatures, so they must have a healthy, sanitary environment to live in. Most gerbils keep their enclosures clean by hiding their pee and poop in the bedding, but it’s far more hygienic for them to use a litter tray.

You can toilet train your gerbil. For new pets, set up a litter tray filled with sand or chinchilla dust, and let your gerbil get used to going to the toilet in there. For established gerbils, put the litter tray in the spot it most commonly goes to the bathroom – the smells should encourage it to use the tray. If your gerbil struggles, place soiled bedding in the litter tray.

Not all gerbils understand how to use the litter tray straight away. You might need to deep clean the gerbilarium for stubborn rodents and leave the area around the litter tray free from the substrate. This will leave it no other option but to use the tray.

Can Gerbils Be Litter Trained?

While not the easiest thing to do, you can train gerbils to go to the toilet in a specific spot within their enclosure. Pooping is a daily occurrence for gerbils. Depending on what they eat, they produce between 5 to 20 pellets a day. This is a lot for such a small rodent, but it’s perfectly normal.

Gerbil bathroom habits are unique because they eat their poop. According to the Journal of Nutrition, this is known as coprophagy, which many rodents and rabbits do. It keeps their digestive systems working properly and provides them with the nutrients they need to be strong and healthy.

Some gerbils use their running wheel to poop, which means it goes everywhere as soon as they start running. Gerbils that do this benefit the most from litter training.

That being said, gerbils are naturally one of the cleanest rodents, as they bury their waste in the substrate. In most cases, you won’t even see their poop until it needs replacing.

Gerbils tend to go to the toilet in one area, so they don’t even need litter training in most cases. But it doesn’t hurt to give them a helping hand while they’re still young. Also, using a tray prevents them from using their bedding as their toilet.

How To Litter Train Gerbils

Litter training gerbils needn’t be challenging, but everyone’s experience will be different. If you start as soon as you get your gerbils, you should have a good level of success. It’s also easier than training them to do tricks, as gerbils naturally possess clean toilet habits.

There are two methods of potty training, and both depend on your gerbil’s age. You’ll also need a litter tray for either one. Here’s how you do it:

As mentioned, you’ll have a much easier job litter training your gerbil if you do it while it’s young. That’s because it won’t have learned any bad habits. To litter train a new gerbil pet:

Set Up the Litter Tray

Set the litter box up and fill it with sand or chinchilla dust. A clean Tupperware box is fine if you don’t have a gerbil litter tray. Put it into your gerbil’s enclosure before adding the rodents so that they can use it straight away. An open corner is the best place for it.

The next step is to introduce your gerbils to their new home. As soon as you put them into the gerbilarium, they’ll roam and explore their new surroundings.

Your gerbils will most likely play in the litter tray at first. They’ll also roll around in the sand or dust and clean themselves off. They’ll do this until they realize the tray’s for urinating and defecating – which they’ll learn during this process,

For the first few days, monitor your gerbils to see whether they use their litter tray to go to the toilet. You should see promising signs at this stage, even if they’re not using it entirely.

Signs that they’re using their litter tray include clumps of waste and wet patches within the dust or sand. In time, they should start to bury their waste in the sand, which is a natural part of their instincts and a good sign that your training method’s working.

Keep cleaning the litter tray every few days so that it doesn’t become overly smelly. If it’s too dirty, your gerbils might refuse to use it and move back to their bedding instead. You don’t need to do a deep clean every time, but a simple spot clean will do. Once your gerbils begin using the tray frequently, they’ve been successfully litter trained.

If you have gerbils who are already established in the gerbilarium, it’ll be a bit trickier to litter train them. It’s not impossible, though – you need to spend a bit more time and effort on it. There are two ways you can do this, including:

This method gives your gerbils an element of choice, as it allows them to pick their bathroom area. Here’s how:

At this point, they should begin to associate the litter tray with their new toilet area, especially as they already used that spot as their bathroom. If they don’t, you’ll need to move to the second method.

For this to work, follow all the steps set out in method one and give your gerbils the chance to get used to their new surroundings. If they struggle to use their litter tray as a bathroom, place some bedding they’ve already peed or pooped on in the tray to encourage them to use it.

Your gerbils should associate the smell with their bathroom and start using the litter tray instead of the substrate.

If these steps aren’t successful, you’ll need to deep clean your gerbil’s cage and put the litter cage in there while there are no familiar scents. Then, only put the bedding where your gerbils sleep – keep the areas they use to go to the toilet completely clear of the substrate except for their litter tray. This way, they’ll be forced to use the tray.

Eventually, you can start using bedding throughout the entire enclosure again, but only when you know your gerbils are fully toilet trained.

How To Clean Your Gerbil’s Litter Tray

When your gerbil’s litter tray begins to smell, it’s time to give it a deep clean. One of the biggest reasons your litter training methods fail is because the litter tray is too smelly for your gerbils to use. If they can’t bury their waste, they won’t use it. To clean the litter tray:

Doing this a couple of times a week should be enough to keep conditions clean and sanitary.

Can You Use Cat Litter For Gerbils?

Even though cat little is highly absorbent and controls odors effectively, it’s a poor choice for your gerbil’s litter tray. In fact, most cat litter is unsuitable. That’s because:

Unscented and non-clumping cat litters, made of recycled paper, may be safe for the litter tray, but it’s best not to risk it by choosing something more suitable for gerbils.

The level of success you have with potty training your gerbils depends on how willing they are to learn. Some will get it straight away, while others will be more stuck in their ways. Patience and consistency are crucial, but try not to get frustrated with your pets.