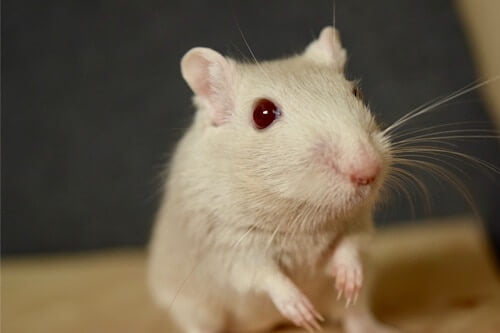 So, your gerbil has lost its tail or the tip of its tail. If a predator grabs the tail in the wild, it will ‘slip off,’ allowing the gerbil to escape to freedom. It’s painful, and the gerbil’s tail is gone permanently, but it’s better than being eaten by a predatory animal. But why would this occur in a domestic setting?

Pet gerbils lose their tails due to tail slip. This occurs when you pick a gerbil up by its tail, leading to permanent damage. The skin comes away (degloving), and the tail tissue will rot away and die. The gerbil will then chew off its tail or it will need to be amputated by a vet. Never grab a gerbil by its tail!

Infection and tail loss may also occur after tail-biting between two gerbils during a fight. While your gerbil will survive, the wound can cause complications. If so, you will need to take your gerbil to the vet to clear up the infection.

Why Do Gerbils’ Tails Fall Off?

There are two reasons why gerbils lose their tails:

What owners don’t always appreciate is that a rodent’s tail is vitally important. It performs several vital functions, such as regulating heat loss (rodents don’t sweat) and assisting with overall balance.

It’s common for gerbils to lose the tip of their tails in an accident. This occurs more frequently than the entire tail falling off. You won’t see this happen unless the tail is cut due to the bones.

These accidents can occur when the tail gets stuck in something, such as the enclosure gate or running wheel. The delicate skin is then pulled from the tail. The tail may come off entirely or still be attached in some places.

When this occurs, the tip of the tail will become exposed. The bone may be poking out, which is distressing to see. However, this isn’t usually an issue because gerbils are quick healers.

What Is Tail Slip in Gerbils?

Tail slip is a common condition where the skin on its tail may start to come off, causing pain and distress. There are four symptoms associated with tail slip in gerbils. These are:

Losing a tail isn’t a fatal condition for a gerbil. What can be fatal is an infection, which may spread to the bloodstream. This is called sepsis, and it can kill a small animal like a gerbil within days.

Tail slip is a gruesome sight. When you see it, it’s understandable why infection can occur. Rodents’ tails are a lot like human digits, i.e., fingers and toes. There isn’t much muscle and fat under the skin.

Therefore, when tail slip occurs, you’re likely to see your gerbil’s tail bones sticking out. They will be surrounded by soft pink muscle and flesh, although not much of it.

The early stages of tail slip are less easy to spot. The earliest sign is baldness. Since the hairs on your gerbil’s tail are thin and wispy, it can be difficult to spot when they fade and die. It’s only after this occurs that you might notice the skin sloughing off.

Why Does Tail Slip Occur in Gerbils?

Tail slip is usually the result of poor handling. Gerbil’s tails are sensitive like those of other rodents so, if the tail is subject to trauma, tail slip may occur.

According to the Journal of Visualized Experiments, rodents hate being picked up by their tails. When this is done, the rodent will begin exhibiting escape behaviors.

You can accidentally cause tail slip by picking up a rodent by its tail. Rodents are not supposed to hang by their tail in any circumstances, either in the wild or captivity.

Unfortunately, this is the first instinct of many children who want to look at or interact with their pets. If you are a parent looking after your children’s gerbils, ensure that they know not to pick up a gerbil by its tail.

Tail trauma can also occur due to fighting. Gerbils frequently fight with one another in their gerbilarium. This can cause tail slip, as well as other issues.

Other Causes of Bald Tail in Gerbils

A gerbil may lose patches of hair on any part of its body. For example, it can lose hair on its face by excessively rubbing its face against the cage. In the same way, its tail may be rubbing against things that make it go bald.

Hair loss can also occur due to parasite infestation. Where parasites bite, they leave an itchy mark. Your gerbil will scratch this mark, which can cause baldness. However, this is unlikely to affect the tail because parasites infest the body, not the tail.

A lack of nutrients, vitamins, and minerals can cause alopecia. This affects all parts of the body with hair and is accompanied by depression, weight loss, skin scaling, and inflammation.

How To Treat Tail Slip in Gerbils

The first step is to have the condition diagnosed. This can be done by a veterinarian, who will take a look at your gerbil’s tail and diagnose the issue. They will also check to see whether there are any secondary infections.

There is only one treatment for tail slip, which is amputation. Your vet can perform this treatment. According to the journal Laboratory Animals, this doesn’t affect rodents’ future behavior or anxiety levels.

As well as amputation, your gerbil may require antibiotics if your gerbil’s tail is infected. Your vet will amputate above any rotten and infected tail tissue. However, sepsis is still possible (infected blood).

After amputation, check that the wound remains uninfected by regularly cleaning it. Do so gently so that you don’t aggravate the area, and don’t pick at any scab or scar tissue. Then, allow your gerbil to heal gradually on its own.

Do Gerbils Bite Their Tails Off?

Gerbils sometimes bite their tails off. They can do this to themselves or other gerbils. If you notice your gerbil chewing its tail, that’s likely because it’s in pain. Gerbils and other rodents react to chronic pain by chewing off the part that hurts. Gerbil tails are sensitive, so even a slight injury can cause extreme discomfort.

So, your gerbil may have a slight tail slip issue that it’s trying to fix. Or, it may have been bitten by one of the other gerbils in its enclosure. Gerbils bite each other’s tails frequently. The living environment may have damaged your gerbil’s tail. For example, it may have caught its tail in its running wheel while playing.

In the wild, biting off the tail can remove the infection. The gerbil gnaws away at any dead tissue, which should prevent it from spreading. But, in captivity, you should have the tail treated by a vet.

Why Do Gerbils Bite Each Other’s Tails?

Gerbils bite each other’s tails, often because they’re fighting for space and food. They live in communal groups, and in any community, there will be frequent in-fighting. Gerbils can be very aggressive with one another.

Fighting commonly occurs over food, especially if you give your gerbils a food bowl. There is only limited space around a food bowl, so all of the gerbils will clamor and fight for extra room.

One gerbil that is bigger than another will fight its way to the best feeding space. In gerbil groups, there is usually a dominant pair and many subordinates living together. The pair are often the parents of the others.

In the wild, the subordinate being bullied would start its own burrow. But in captivity, this isn’t an option. This can lead to prolonged fighting, some of which may involve the biting of tails.

Do Gerbils’ Tails Grow Back?

Gerbils’ tails don’t grow back; that’s a physiological adaptation unique to lizards. Mammals can’t grow back body parts that have been lost. Once the tail is lost, it’s gone for good.

However, gerbils can live full and happy lives without their tails. The only issue is that it makes it difficult for your gerbil to manage its temperature and balance, at least in the short term.

Ensure that your gerbils are safe from now on. If they continue to fight, try different pairings in a different enclosure. Never lift your gerbil by its tail again. Here’s some advice on how to pick up a gerbil correctly.