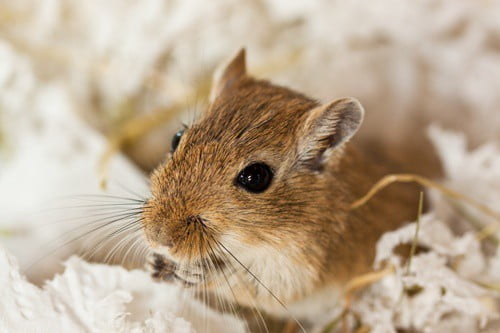 Loneliness in gerbils can cause sadness and depression, so socialization is crucially important. You can keep them in pairs or groups, but this can lead to fighting between gerbils.

Gerbils should be paired up because they are social animals. Bigger groups are possible, but then declanning becomes an issue, which causes fighting. Almost all single gerbils get lonely and bored.

Gerbils can socialize either with other gerbils or with you, or both. If you must have a single gerbil, spend plenty of time with it and give it affection. This will keep your pet happy and contented.

Do Gerbils Live in Groups?

Gerbils are social creatures, both in the wild and in captivity. They live in groups, either a pair or a pair and lots of other gerbils. This is the case for many similar mammals.

Gerbils have complex social systems, with a dominant pair and subordinate gerbils living together. Each gerbil understands this social system and will behave in certain ways based on its position.

You can see these behaviors in action by observing gerbils when together. Gerbils communicate through sound and body language. So, for example, gerbils can purr to show they’re content or squeak to show they’re angry.

In the wild, gerbils do lots of things together, too. They will forage, dig burrows, and fight and play together. If a wild gerbil were to live alone, it would be vulnerable to predators. It would also find it hard to get enough food.

A gerbil can live alone. Many owners, especially new owners, only get one gerbil at first. A gerbil will:

These are all normal gerbil activities. However, when living alone, gerbils aren’t happy. They can quickly become depressed.

It is possible to make your gerbil happy if it’s alone. But to achieve this, you would need to spend lots of time with it. Gerbils enjoy human interaction, and it stops them from getting lonely.

But it’s far easier and better for the gerbil if you keep it with other gerbils.

While gerbils like to live alone, that doesn’t mean they never want to be alone at all. There are many circumstances in which your pet might like alone time, including:

The difference, though, is that most gerbils only want to be left alone sometimes. Not all the time.

To understand why gerbils live in groups, you have to understand the gerbil social structure. The core of the structure is the breeding pair. These are a male and female who usually mate for life.

The breeding pair can tell the other gerbils what to do. If food is scarce, for example, then fights may occur. This happens when one or both of the breeding pair want to eat as much food as they can, even if the others have nothing to eat.

This might all sound negative, but the gerbil social group is a positive thing, too. Young gerbils will play with one another frequently, and adults will forage for food together. If you want to keep pet gerbils, you have to respect this complex structure.

Most owners who buy a pair of gerbils will get one male and one female. Because male and female gerbils have different personalities, this can be interesting for the owner. And, of course, they can produce pups.

Opposite sex pairs are breeding pairs. In the wild, two gerbils will meet and start living in the same burrow. They will then begin producing litters. These pups become the grown-up gerbils that make up the rest of the group.

You can keep opposite-sex gerbil pairs, but they may not get along. You should also be prepared for the pair to have pups. This isn’t an ideal setup for beginners.

Despite not breeding, same-sex pairs will still form tight friendship bonds. So, the same still applies: if one passes away, the other will be sad.

Why Do Gerbils Live in Groups?

Captive gerbils live in groups because their wild cousins do. This is a behavior that is rooted in evolution. Given that gerbils have only been kept as pets for fifty years or so, their behavior hasn’t had time to develop. There are many reasons why you shouldn’t allow gerbils to live alone.

Do Gerbils Get Lonely?

Because gerbils are so social, living alone has negative effects on them. According to Psychological Bulletin, gerbils are studied as a model of loneliness in scientific experiments. This helps them better understand loneliness in people.

As you should when you have pets, imagine you’re in your pet’s position for a moment:

You would go stir-crazy. Social isolation can exacerbate physical health problems, but it’s bad for mental health. Gerbils become unhappy and even depressed when they live alone.

Besides that, gerbils in the wild rely on each other. Gerbils find food, and any extra they find, they hoard. All the gerbils add to this hoard, which is vital during hard times. Gerbils can also warn the other members of their group if a predator is nearby by squeaking.

This reliance passes on to captive gerbils, even if there are no predators to attack them.

Do Gerbils get Bored?

Aside from feeling lonely and isolated, single gerbils get bored easily. Again, imagine if you were your pet. You would likely get bored in your small enclosure without much to do. Having a friend with you can make the most nerve-wracking or boring situations better.

The same applies to gerbils. A gerbil that’s on its own may begin displaying stereotypy behaviors. These are things that animals do when they’re frustrated or bored in captivity. Gnawing cage bars is one that gerbils display.

You will see these behaviors far more frequently in lonely gerbils than grouped gerbils. That’s because gerbils keep each other entertained by:

Without another gerbil around, it’s easy to see why your pet would miss these things. You can prevent boredom in gerbils by offering your pet lots of toys. Plenty of time outside the enclosure will also help both gerbils that are alone and gerbil groups.

Do All Gerbils Need to Live in Pairs?

While the above is true of almost all gerbils, some are less friendly. If you keep many gerbils, you may get one that is distrusting and dislikes company. This usually occurs with females but can occur with males too.

Say that you bought a gerbil, but soon after found that gerbils prefer living in groups. To fix the problem, you get another gerbil. But the first gerbil rejects the second, no matter what you do. It also doesn’t like being petted or held.

You may get another gerbil, but the results are the same as with the first. This isn’t unheard of. The gerbil will continually reject any gerbil you try to introduce it to. It may never grow to like you, either.

With gerbils like these, you have no choice but to allow them to live alone. You have to keep it in an enclosure on its own. This can be annoying as if you want more than one gerbil, you need more than one cage. However, these gerbils are far less common than gerbils which enjoy being in groups.

Can Gerbils Live Alone after One Dies?

You may not have bought only one gerbil. You may have had two or even more than two. But gerbils don’t have long lifespans, only living around two to three years on average. If you have a group of gerbils, you will have frequently encountered them passing away.

This is an unfortunate reality of owning pets like these. Many owners, after one of their pair passes away, won’t replace it. The idea of ‘replacing’ a pet can seem sad, almost disrespectful to the pet that passed away. But you should.

Gerbils are especially likely to become unhappy when their friend or mating partner passes away. When one gerbil passes away, the other will display signs of loneliness, like:

This will occur in almost every gerbil when one of a pair dies. Even so, you shouldn’t hurriedly get another gerbil for your pet to pair with. The two would likely reject each other.

Instead, begin by cleaning your gerbil’s enclosure. Get rid of old bedding, wipe clean the bars or glass of the cage, and clean any toys inside. This will get rid of the smell of the old gerbil, which can hang around and make the remaining gerbil sad.

Then, introduce your gerbil to its new friend gradually using the split tank method. This ensures that the two don’t fight.

Can Gerbils Die of Loneliness?

Gerbils can’t die from being alone. Loneliness does cause behavioral changes in gerbils, which indicate sadness/depression. These changes/symptoms are unpleasant, but your gerbil will live through them.

Being alone can contribute to health issues that can cause early passing, though. It can discourage your gerbil from being active, e.g., using its running wheel. This can exacerbate weight issues and heart disease in gerbils.