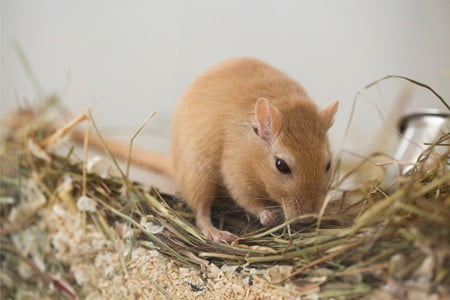 Gerbils chirp and squeak constantly. However, what gerbils mean when they make squeaking sounds may not be clear, and it depends on the context.

Gerbils chirp to communicate with each other. Chirping can be due to fighting, playing, pain, stress, excitement, and keeping track of other gerbils. Young litters communicate with their parents constantly.

Their noises are high-pitched and are mostly outside the human hearing range. If you notice your gerbil making weird noises, observe it for a while. You can tell why a gerbil is chirping from its behavior, e.g., if it’s hurt.

Table of Contents show
1 Why Do Gerbils Chirp?
1.1 What Does Gerbil Chirping Sound Like?
1.2 How Often Should Gerbils Chirp?
1.3 What Is a Gerbil Saying when It Chirps?
1.3.1 Two Gerbils Fighting
1.3.2 Gerbil in Pain
1.3.3 Talking About Something
2 Do Gerbils Squeak when Happy?
2.1 Adult Gerbils Talking to Litter
2.2 Gerbils Playing
2.3 Gerbil is Excited
2.4 Related Articles:

Why Do Gerbils Chirp?

Gerbils chirp because they’re naturally communicative creatures. They live in groups in the wild, and any animal that must live in a group must also ‘talk’ with the other members. Otherwise, the group wouldn’t function.

According to PLOS One, you can’t hear most gerbil noises. That’s because they’re so high-pitched that they’re outside the range of human hearing. The squeaks you can hear from a gerbil are the lowest pitch noises it can make.

And another paper in Europe PMC shows that gerbils have excellent hearing. So, if they’re ‘talking’ all the time and have good hearing, that must mean that gerbils love communicating.

All gerbil communication noises sound like chirping. Gerbils have high-pitched voices, so each noise they make sounds like a squeak. There are many reasons why a gerbil might chirp to another gerbil.

Chirping is the usual noise that gerbils make. You will have heard it lots of times before. It’s high-pitched but varies in volume from loud to quiet. Your gerbil may chirp only once, or it may chirp many times in quick succession. Or, it might chirp many times over a long period of time.

This means that you can tell a lot about your gerbil’s behavior from the noises it’s making. Telling the difference between these different kinds of ‘chirp’ is the purpose of the next section.

How Often Should Gerbils Chirp?

There is no limit to the amount of time that a gerbil can or should chirp for. A paper in the Journal of the Acoustical Society of America states that gerbils chirp and squeak very frequently. But, of course, you won’t hear all of these squeaks because they’re too high-pitched.

It’s normal behavior that you will hear all gerbils doing. It’s only a problem if there’s a health issue with your gerbil or if your gerbils are fighting.

What is a problem is if your gerbil is chirping loudly, repeatedly, at a shrill pitch. This is a chirp of alarm of pain. If you hear chirps like these, then you should check on your gerbil to see if it’s hurt.

What Is a Gerbil Saying when It Chirps?

A chirp can mean many different things. While your gerbil will understand what another gerbil is saying, it may not be easy for you to do so. But several differences may give you a clue:

Look at the context in which you hear the chirp. If two friends are chirping at each other, they’re likely playing or talking. If the two gerbils hate each other, they may be fighting.

So, with that in mind, here are all the reasons why a gerbil might chirp at another gerbil.

Play fighting can be difficult to tell apart from real fighting. Real fighting includes wrestling, boxing, and stand-offs. The gerbils may also chase each other. However, rather than playing, they’re trying to bite each other.

If your gerbils are chasing each other around and initiating physical contact while squeaking, observe them a while. It should become obvious if they’re playing or fighting. Fighting involves more aggressive actions, e.g., where one gerbil pins the other. Fighting can also involve teeth.

There is also a difference in the volume of the squeaks and chirps. When gerbils fight, their squeaks are louder and quicker in frequency. They sound more urgent, which is what the gerbil is trying to convey.

All animals that can make noises will make a noise when they’re hurt or stressed. This is an instinctual reaction, which applies even more so to communicative animals like gerbils.

If a gerbil is sick or injured, it will be lethargic. This means it won’t move or do much. When it’s like this, it won’t be noisy. But if you pick it up, or if another gerbil nudges or moves it, it will squeak and squeal.

The problem could be of any kind. The gerbil could be ill, or it could be physically hurt. But whatever it is, your gerbil is hurt enough to be chirping.

This is a form of urgent communication. The gerbil is saying, ‘Put me down, that hurts!’ If you notice that your gerbil is squeaking because it’s in pain, you must ascertain the cause of the issue.

Your gerbils may also be communicating for no obvious reason. Sometimes, two gerbils are sat eating their food, chirping away at each other. It’s not clear why either one is chirping. They may have a reason to do so, but you can’t tell what it is.

This isn’t a problem. It indicates that the two are talking about something, perhaps food. Example meanings might be ‘There’s nice food over here,’ or ‘There’s too much food for me here, so you can have some if you want.’

There’s also the possibility that there’s no meaning to the chirping. The pair could be making noises for no reason.

Do Gerbils Squeak when Happy?

Gerbils squeak when they’re unhappy or in pain. Or, they might squeak for no obvious reason. But can gerbils also squeak because they’re happy or playing?

They can, and these squeaks are noticeably different from the kinds alluded to above. You can tell the difference based on what they sound like, picking up the experience necessary to do so over time.

Communication begins in gerbils from a young age. From the moment a gerbil is born, it communicates with both its mother and father. It does so because it’s entirely reliant on them. It can’t move around, open its eyes, hear, or feed itself.

These squeaks may be too high-pitched for humans to hear. But you can hear some of these sounds. They take the form of a back and forth between the parents and litter. The litter will squeak to ask where the parents are, and they will respond.

Gerbils continue to communicate throughout their whole lives. Chirping forms the basis of all interactions, like noises do for many animals. One way in which gerbils will interact is if they’re playing.

Younger gerbils play more frequently than older ones, but you’ll still see older gerbils play from time to time. Playing takes many forms, including chasing and play-wrestling. While they’re playing, both gerbils will squeak at each other.

These squeaks can sometimes be continual. They can also sometimes rise and fall, coming only when the gerbils are exerting themselves.

Your gerbil may also squeak when you take it from its enclosure. If it likes you, it will begin to get excited when you move towards its cage. If you lift the lid from its cage, it may start jumping upwards towards you as if to try and reach you.

At the same time, it may begin making loud, excited squeaks. These are urgent, like those of a gerbil that’s in pain or fighting. But you can tell from the context of the situation that this isn’t what’s happening.

Instead, your gerbil is excited. It’s squeaking loudly to try and get your attention, almost like a young gerbil talking to its parent. It will then continue to squeak when you pick it up and take it from its cage.