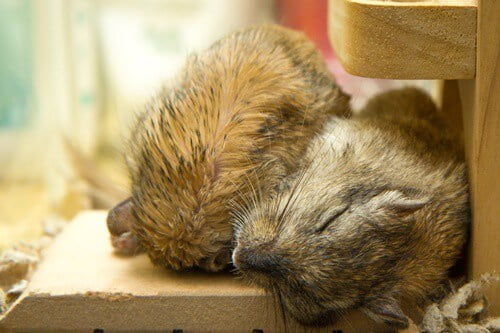 Many people underestimate how much sleep the average gerbil needs. Because gerbils are such active animals, they need a lot of sleep to compensate for this physical exertion. But it isn’t normal for a gerbil to sleep all the time or suddenly sleep more than usual.

Gerbils can spend up to 12 hours per day sleeping, broken up into several 1-4 hour naps. It’s normal for gerbils to sleep so much because they burn a lot of energy while awake. But if your gerbil is suddenly sleeping much more than normal, it could be bored, lonely, or have an undiagnosed illness.

We’ll let you know how much gerbils sleep and what a normal gerbil sleep schedule should look like. We’ll then explore what might cause your gerbil to sleep all the time and how you can help.

How Much Do Gerbils Sleep?

Many people believe that gerbils are diurnal (active during the day). However, this isn’t strictly true.

A study on gerbils sleeping patterns, published in Physiology & Behavior, found that captive gerbils are metaturnal. Instead of sleeping exclusively during the day or night, they sleep partly during both.

On average, pet gerbils spend about half of their time sleeping. In a 24-hour period, most gerbils will spend around 12 hours asleep. Slightly more or less is normal, too.

But gerbils don’t sleep for 12 straight hours at a time. They split their sleep up into several small naps, spread throughout the day and night.

In the wild, gerbils tend to be most active at dawn and dusk. This could be a defense mechanism to help protect them from predators. Both diurnal and nocturnal predators struggle to spot prey when the sun is low in the sky.

Pet gerbils usually sleep equally during the day and night, but this can vary. Every gerbil is different. Some captive gerbils lean towards sleeping during the day, but for others, it’s the opposite.

Interestingly, gerbils sleeping patterns tend to vary based on the season. In the winter, gerbils will sleep more than in summer. They’ll also be less active and energetic while they’re awake.

A study in Cell Transplantation found that lower light levels can induce depression-like behavior in gerbils. In winter, the days are shorter, which explains why gerbils aren’t as active during this time.

What Is a Typical Gerbils Sleep Schedule?

Gerbils don’t sleep for long periods at a time. You’ll never find a gerbil sleeping through the night.

Gerbils sleep for around 1 to 4 hours in one go, and a short burst of intense activity will follow this. During this, your gerbil might forage for food or water, dig a tunnel, or explore its gerbilarium. Then, it will take another nap.

Most captive gerbils sleep for slightly longer during the day than at night. However, they are incredibly active while they’re awake during the day.

Your gerbil’s sleep pattern may change the longer they live with you. Many pet owners find that their gerbil learns to sleep while they’re asleep or when they’re not home. Gerbils tend to wake up when you open their enclosure, as they’re curious small animals.

A gerbil’s sleep schedule may also depend on other gerbils in its environment. Some gerbil pairs sleep in “shifts.” One gerbil will be sleeping, while the other is busy building a tunnel or foraging for food.

Some gerbils never conform to a sleep schedule at all. It’s normal for some gerbils to be active one day and sleep a lot the next.

Bear in mind that your gerbil might appear to be sleeping, even if it isn’t. Gerbils sometimes like to spend time sitting in their hides or tunnels while awake. This is particularly likely if you got your gerbil recently and it doesn’t trust you yet.

Why Do Gerbils Sleep So Much?

Gerbils have to sleep a lot because they are highly active and expend a lot of energy.

While they’re awake, gerbils are constantly on the go. They’ll spend most of their time digging tunnels or running in their wheel.

Gerbils rarely ever sit still unless they’re eating or grooming. So, gerbils have to take naps every few hours to restore their energy.

Age can also play a part in a gerbil’s sleep habits. Baby gerbils and elderly gerbils tend to sleep more than young adults.

Baby gerbils’ brains and bodies are still growing and developing. This takes lots of energy, so they sleep more to compensate for it. If your gerbil is still a baby, it may take a few months to establish a sleep schedule.

Elderly gerbils tend to be slower, less energetic, and spend more time sleeping. It’s only natural for them to rest more as their bodies start to slow down. Gerbils might begin to show signs of aging from 2.5 to 3 years old.

Note that a gerbil that has its eyes closed isn’t always asleep.

Why Is My Gerbil Always Sleeping?

All gerbils are individuals and can form vastly different sleep patterns to each other. That also goes for gerbils that live in the same gerbilarium.

Fat-tailed gerbils (also known as Duprasi gerbils) are particularly well known for sleeping a lot. But some Mongolian gerbils are sleepier than others, too.

If your gerbil has always slept a lot, it’s probably normal for them. If it looks healthy, is eating normally, and is active while awake, there’s unlikely to be anything wrong.

It’s also possible that your gerbil might be most active while you’re asleep or at work or school. So, from your perspective, it would seem to be always sleeping.

But, in general, you should notice your gerbil being active periodically throughout the day and night. A gerbil sleeping all the time, or more than usual, may be a cause for concern. It could indicate a decline in mental health or physical illness.

If your gerbil is bored, it will probably spend most of its time sleeping. There’s not much point in being awake if there’s nothing to do. It’s vital to enrich your gerbil’s enclosure with things that will keep it entertained. Boredom can lead to depression.

Gerbils need space to exercise and activities to keep them busy. Your gerbil should have, as a bare minimum:

As well as the above, take time to play and interact with your gerbil every day. All gerbils appreciate getting out of their cage occasionally to explore the world (under supervision).

Without a playmate, most gerbils will become lonely and depressed. Lonely gerbils spend a lot of time sleeping, even if their gerbilarium is filled with toys and activities.

In the wild, Mongolian gerbils live in complex social groups. According to Integrative Zoology, both male and female gerbils interact with others year-round. So, whether your gerbil is a boy or a girl, it should always have at least one companion.

For best results, you should adopt gerbils in pairs from the same litter. If you adopted a lone gerbil, you’d have to introduce a new gerbil slowly. Choose a gerbil of the same sex, and introduce them in neutral territory.

Most gerbil owners use the “split cage” method. This involves splitting a large tank down the middle with a wire mesh divider. The gerbils get used to each other’s smell for 1-2 weeks before the divider is removed.

A gerbil with a playmate, and a large enclosure with plenty of things to do, should be reasonably active. If not, your gerbil might have an underlying illness or health condition.

Like most animals, gerbils sleep more when they are sick or injured. It’s a defense mechanism developed to help them heal quicker. It also helps them to avoid pain by sleeping through it.

Some illnesses and conditions which gerbils are prone to include:

All of the above could make a gerbil lethargic and spend more of their time sleeping.

If your gerbil has suddenly become tired all the time with no warning, take them to a veterinarian. Ensure that the veterinarian you choose is experienced with gerbils, as not all are.

The veterinarian will be able to run tests and determine what might be causing your gerbil’s sleepiness. Most gerbil illnesses can be treated with medication, as long as they’re caught in time.