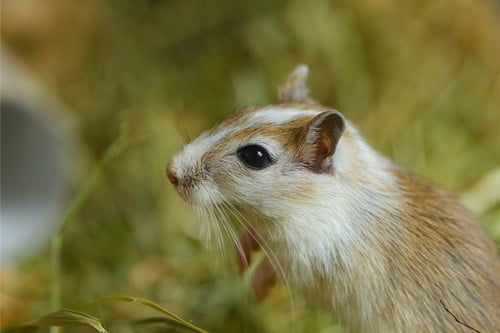 A stroke is a serious condition that can threaten the health and life of a gerbil. It’s vital to recognize the signs of strokes in gerbils so that you can seek treatment.

Check for symptoms including lack of energy (lethargy), difficulty moving limbs, closed eyes, and no appetite. These symptoms occur almost immediately after a stroke. Take your pet to the vet after a diagnosis. There is no cure, but your pet may recover on its own.

You likely won’t observe your gerbil having a stroke because they occur so quickly. Strokes are debilitating and can cause your pet to lose some or all of its functions. They can also be fatal.

Table of Contents show
1 What Is a Stroke in Gerbils?
2 What Causes Strokes in Gerbils?
2.1 Symptoms of Strokes in Gerbils
2.1.1 Lethargy / Lack of Movement
2.1.2 Eyes Closed
2.1.3 Difficulty Moving One Side of the Body
2.1.4 Hardly Eating, or Not Eating at All
2.1.5 Complete Paralysis
2.1.6 Sudden Onset of Symptoms
2.1.7 Quickly Worsening Symptoms
2.2 Gerbil Stroke Recovery
2.2.1 Feed Your Gerbil as It Recovers
2.2.2 Keep Your Pet Warm
2.3 Gerbil Stroke Treatment
2.3.1 Can Gerbils Recover Fully after a Stroke?
2.3.2 Related Articles:

What Is a Stroke in Gerbils?

Strokes in gerbils are the same as those that affect people. According to the journal Stroke, a stroke occurs when part of the brain loses access to blood. This can happen either because there is a lack of blood flow or because there is bleeding somewhere.

These two kinds of strokes: ischemic and hemorrhagic. When a stroke occurs, it causes brain damage wherever it occurs. This is why strokes can have different effects.

Some primarily affect mobility, while others affect speech. That’s because the area of the brain that controls speech is different from that which controls mobility.

If your gerbil has a stroke, it can affect its mobility, its ability to communicate, or both functions.

What Causes Strokes in Gerbils?

According to the journal Brain Structure and Function, gerbils are frequently studied in neuroscience research. We understand a lot more about the gerbil’s brain than many other animals.

Gerbils have a structure in their brains called the circle of Willis. This is a structure that is found in the brains of all mammals. It’s a circular structure made up of arteries that supply blood to the brain. Problems with this structure can be the cause of brain embolisms.

The gerbil has an issue with its circle of Willis. In people, the circle is complete, allowing blood to flow through easily. According to the Institute for Laboratory Animal Research, it’s incomplete in gerbils.

When the gerbil has an issue with its blood flow, it’s far more likely to experience a stroke than other animals. While the science behind this is complicated, the results are easy to understand.

Some gerbils’ brain artery structure is worse than that of others. This is inherited from its parents. Because all pet gerbils are descended from only around fifty breeding pairs, inbreeding has long been an issue. This has likely compounded the issue with the gerbil’s circle of Willis.

Unfortunately, this problem cannot be fixed. If your gerbil is born with this issue, it will have it for life. There’s nothing a vet can do to help your pet.

Symptoms of Strokes in Gerbils

The symptoms are the same as those experienced by people. That’s because a stroke affects the brain in the same way. You may already be familiar with these symptoms, either because you know about strokes in people or you’ve known somebody who had one.

The first symptom is lethargy. This is the medical term that means a lack of movement and energy. The animal can’t move much, and when it does move, it can’t move quickly.

The main reason why this occurs is energy conservation. You may not appreciate it, but when you’re ill, your body is fighting hard. It’s doing lots of different things and has to do them all at once. This consumes a lot of energy. The same applies to gerbils.

Lethargy is a common response to many health conditions. That means you can’t say that lethargy is a definite sign of stroke on its own. But when you notice lethargy alongside the other symptoms below, then stroke may be the cause.

Alongside your pet’s lethargy, you will see that it doesn’t open its eyes. Its eyes are either three-quarters shut or fully shut. It may open them occasionally, but it won’t look around like it would if it were healthy.

Again, this is a sign of many different illnesses and health problems. It isn’t solely related to strokes. But it only occurs to a noticeable extent when your pet is severely ill. Since a stroke is a severe health condition, that’s why you’re seeing this now.

Difficulty Moving One Side of the Body

This means that when a stroke occurs in the left-hand side of the brain, it affects the right side of the body exclusively. So, you might expect to see:

Hardly Eating, or Not Eating at All

This behavior stems from the gerbil’s evolutionary history. Gerbils live in big groups, which all go foraging for food together. Any spare food that’s not immediately needed is hoarded in the burrow, in which they all live.

A gerbil that’s close to death won’t eat from this hoard or go foraging for food. The point is so that the other gerbils in the group have more food to eat. Any food the sick animal eats is wasted, in a sense, because the creature is about to die. That food is better left for the other gerbils that will need energy for tomorrow, the day after, and beyond.

This is a trait shared by many other animals. Even people, when close to death, don’t have a normal appetite. So, like your pet’s eyes being closed, this is a sign that your gerbil is critically ill.

While strokes typically affect only one side of the brain, they can affect both. Because gerbils are susceptible to stroke, they can have multiple. And the individual strokes can be severe enough to cause complete paralysis.

This is where your gerbil is still alive but is unable to move. It can’t get up and walk around, let alone feed itself, play, hide, or interact with other gerbils. It may still have some functions:

When this occurs, your gerbil will likely die shortly. That’s because the stroke has caused a large amount of brain damage. This damage isn’t only to your gerbil’s intelligence but to basic functions like breathing. And if your pet doesn’t die soon, it will die later because of starvation.

Taking your pet to the vet to put it out of its misery is best if you notice this symptom.

Something that characterizes strokes is that they occur suddenly. A blood vessel can burst in an instant, and the effects begin as soon as it does.

This means that you can’t spot a stroke coming like you can with other health conditions. A respiratory infection, for example, can take days and days to get worse. You can identify it before it gets too bad and take your pet to the vet.

With a stroke, you can’t do that. Your gerbil will be fine one evening, and then by the next morning, experience all of the above symptoms. So, you won’t notice the symptoms all occurring one by one, but all at once. This is distressing for the owner as well as the gerbil.

You will play with your pet normally one evening before placing it back in its cage. You will go to bed not having spotted any symptoms.

You will then wake up the next morning and see your pet displaying the symptoms listed above. Naturally, you will keep an eye on your pet to see if these symptoms change. But you may not yet appreciate how serious they are. Initial symptoms might include:

Then, you may leave your pet alone until the evening, hoping that the symptoms might reverse. But when you check on your pet later that night, you might notice:

These symptoms will continue until your pet dies. To be clear, this doesn’t happen in every case, and many gerbils do get better after strokes occur. But this is what happens in the worst-case scenario.

If your gerbil experiences a stroke, you can do certain things to help it. These things are common sense and don’t require expensive equipment or vet bills.

Whenever your pet experiences a debilitating health issue, you must take it to the vet. Vets don’t charge much for basic checkups. A cost of $20 to $40 isn’t unusual for such a basic once-over.

Feed Your Gerbil as It Recovers

Your gerbil may find it difficult to eat. It may have difficulty finding food and picking it up or chewing it. With time, your pet can recover. But it also needs to eat in the meantime or it will starve. Soft foods are the best choice for this. You can choose from things like:

It is difficult to feed your gerbil a fully nutritious diet made only of soft foods. But at least this will give your pet the energy it needs to fight on.

Ensure that you feed your gerbil foods with some magnesium in them. Magnesium is essential for gerbil brain health. It can help prevent seizures and strokes in gerbils. While no studies have yet been done to prove it, it’s possible that it can also help with recovery after stroke.

Something else you can do is to provide your pet with a heat pad to sit underneath its enclosure. This will keep your pet warm inside its burrow, which is good for two reasons:

There’s a lot to be said for keeping your gerbil comfortable during this time. If its condition worsens, you will be taking care of your pet as it passes away. This is known as palliative care, the purpose of which isn’t to cure but to make the patient comfortable before it dies.

This helps both the person and the gerbil. The pet is more comfortable, while its owner knows that they did their best to help.

Strokes are different from other conditions as there is no cure for strokes in gerbils. There is no way to manually undo the damage that the stroke has done to your pet.

But not all is lost. Gerbils can recover after experiencing a stroke, even though there’s nothing you can do to hasten the process.

Can Gerbils Recover Fully after a Stroke?

Over time, your pet can recover some or all of its lost functions. It may regain the use of its limbs, for example, over time. This process is gradual rather than immediate.

Your pet’s mood will also improve. It will become less lethargic. It should start moving around more and interacting with other gerbils like it used to. It should also begin eating of its own accord rather than waiting for you to feed it.