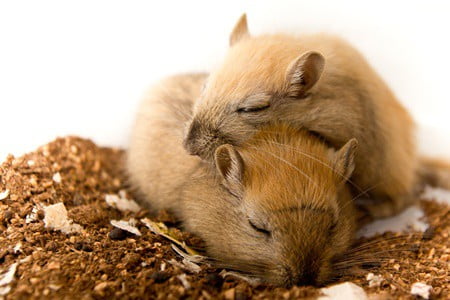 Wild gerbils live together in large clans. They need each others’ company and pool resources together to survive. One example of this behavior is gerbils sleeping together in a large pile.

Gerbils sleep on top of each other to bond and increase their chances of survival. They share warmth, so they’re more insulated from cold weather and don’t need as much food when it’s in short supply. This is crucial for baby gerbils (pups), who are particularly vulnerable to climatic extremes.

If you notice that your gerbils don’t sleep together, this could be a sign of declanning. When one gerbil rests on the surface of the burrow or in the exercise wheel, it has been rejected by its clan.

Do Gerbils Sleep Together?

Gerbils do sleep together. This is a common behavior that you can expect to see in both wild and captive populations. Any group size will sleep in one place, regardless of whether they’re a pair or a large group of siblings.

As such, it’s instinctual for gerbils all to sleep together in the same group burrow. Because it helped them survive in the wild, it’s ingrained in every gerbil to live this way.

Why Gerbils Sleep on Each Other

If Current Zoology is to be believed, they’re highly social animals. They enjoy spending time together, whether playing, foraging for food, or sleeping. Sleeping together helps form stronger group bonds.

Also, sleeping in a pile helps the gerbils conserve and share energy. Energy is a precious resource for all animals. You need food to create it. So, anything that can save energy is a good thing.

A less common reason is that gerbils need to keep their pups warm. Pups are born without fur, and even when they do have fur, they need to conserve energy.

All gerbils, both wild and captive, are social animals. That’s why it’s advised that you don’t keep gerbils alone, but at least in groups.

Gerbils have a social structure that they instinctively understand. The core of the structure is the breeding pair. This pair will mate and have litter after litter. Same-sex pairs are also possible, and while they don’t breed, they have a similarly strong bond.

Around this core gerbil pair are their offspring. The offspring will live with them until they grow old enough to support themselves. Because the pair will have to mate straight after birthing a litter, several litters can live with a pair at once. Around 17-20 gerbils have been spotted living together this way in the wild.

These social bonds must be reinforced so that each gerbil understands its place. So, the core pair will frequently display dominant behaviors, such as scent marking and play-wrestling.

Another way in which these bonds are expressed is through group activities. Group-foraging is one such behavior, as is sleeping together. So, sleeping together in a large group will help all the gerbils feel closer together. This applies both to pairs and larger groups.

Sleeping together also helps gerbils share warmth. This is less important for a domestic gerbil, but it is an instinctive behavior.

In the wild, all animals are locked in battles: with each other, with other species, with predators, and with the elements. A mammal must eat lots of food so that it can produce body heat.

Only with a certain level of body heat can a mammal fight off cold weather and survive. It also needs core body heat to keep the organs warm, or they can’t work and will shut down. This will kill any mammal.

According to the Journal of Experimental Biology, expending energy may help animals live longer on a cellular level. The less energy expended, the less wear and tear the animal experienced.

So, strategies designed to save energy are devised. One such approach is to live in a burrow. The burrow acts as a room, holding onto heat. A warmer environmental temperature in the burrow means that the gerbils have to burn fewer calories for heat.

Another strategy is to have fur. Fur traps body heat like a coat. That’s why mammals have fur coats, which typically grow longer in winter and are shed for thinner versions in the summer.

In this context, sleeping in a big pile helps to conserve heat too. With all the gerbils sleeping together, the environment around them all is made warmer. Each gerbil then has to burn fewer calories, and as a result, needs less food to survive.

Gerbils and Pups Sleeping Together

Another reason why gerbils can sleep together and on top of each other is when they have pups. Pups are born without fur. They’re small, pink, hairless, have closed eyes and ears, and are vulnerable. They can’t feed themselves.

When gerbil pups are first born, they must feed on their mother’s milk. This necessitates that they sit in the nest with their mother. They all sleep together until the youngsters are weaned, i.e., they stop drinking milk.

This serves two purposes. It allows the youngsters to feed whenever they need to, which helps their development. This is of critical importance because the mother wants the pups to grow big and strong.

It also allows them to share their warmth. It takes a week for the pups to develop their first coat of fur. But even then, they still benefit from their mother’s warmth. The pups can then use more of their energy for growing rather than keeping themselves warm.

Do Gerbils Always Sleep Together?

Gerbils don’t always sleep together. Sometimes, one gerbil will want to nap when the other ones don’t. If so, it will rest in the burrow on its own.

A common setup is that a gerbil will be active for an hour, then sleep for an hour. It will continue like this throughout the day and night. If its sleeping pattern doesn’t match with that of the other gerbil/s, it will sleep alone.

This is entirely normal behavior. It doesn’t indicate that the gerbils hate each other or have fallen out. It’s natural because gerbils spend around half their time awake and half their time asleep. They can be equally active during the day and at night. Sometimes, one will want to sleep when another isn’t tired.

However, it can also be that gerbils don’t sleep together because they’ve fallen out. If you notice one gerbil sleeping apart, never sleeping with the others, that’s a bad sign.

Gerbils Not Sleeping Together

If one gerbil isn’t allowed to sleep with the others, it has been rejected. This indicates that your gerbils are declanning. So, one gerbil may be sleeping in the group’s burrow. But the other is forced to sleep on the surface, e.g., in the running wheel.

Declanning is a bad development that can affect any gerbil group. It can even result in one gerbil killing another or two gerbils killing each other. Here’s everything you need to know about it.

Declanning is where a gerbil falls out with another gerbil. It can happen to pairs and large gerbil groups. It results in one gerbil being rejected from the pair or group. The gerbils will consistently fight with and bully the rejected one. According to Hormones & Behavior, this has a hormonal origin.

In the wild, declanning is how a gerbil pair get their youngsters to leave the group. This is essential for the pair’s welfare because:

The rejected gerbil or gerbils will go on to start their own groups. They can live in a same-sex group of siblings or head off to find another gerbil to mate with. They then start their own mating pairs and litters.

What ends up happening is continual fighting. This fighting becomes more and more vicious until one of the gerbils, usually the rejected one, is killed. The gerbils will fight hard with their teeth which is what will eventually kill one of them.