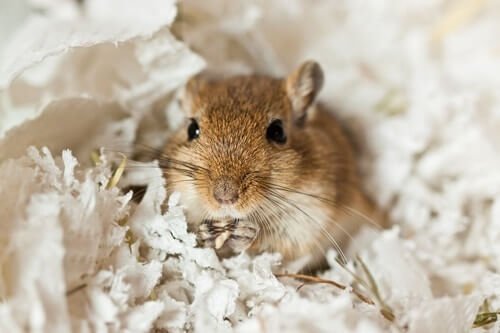 Across Africa, India, and Asia, there are more than 100 different species of gerbils. But only two types of gerbil species are commonly kept as pets, the Mongolian gerbil and fat-tailed gerbil.

We’ll explore the different types of gerbil species and which ones you can keep as pets. We’ll then discuss the differences between Mongolian gerbils and fat-tailed gerbils (duprasi gerbils) before advising you on which gerbil is best to keep as a pet.

Table of Contents show
1 What Types of Gerbils Are There?
1.1 What Are Mongolian Gerbils?
1.2 What Are Fat-Tailed Gerbils (Duprasi Gerbils)?
2 Differences between Mongolian and Fat-Tailed Gerbils
2.1 Appearance
2.2 Housing
2.3 Diet
2.4 Temperament
2.5 Health
2.6 Availability and Price
2.7 Lifespan
2.7.1 Is a Mongolian or Fat-Tailed Gerbil the Best Gerbil Breed?
2.8 Related Articles:

What Types of Gerbils Are There?

Gerbils are small rodents found in the wilds of Africa, India, and Asia. In the 1960s, they entered the pet trade, and since then, pet gerbils have grown in popularity nationwide. That is, except in the State of California, where it’s illegal to own gerbils.

There are over 100 different types of gerbils found in the wild. Some are known as jirds, others as sand rats or desert rats. Pouched gerbils, the smallest, are only 1.5 to 3 inches long. The largest gerbils, known as great gerbils, reach up to 8 inches in length.

However, out of all the gerbil breeds, only two types of gerbil species are commonly kept as pets. These are the Mongolian gerbil and the fat-tailed gerbil (also known as the duprasi gerbil).

Pet Mongolian gerbils have been around for decades. They have been bred due to their different gerbil coat colors. Fat-tailed gerbils, on the other hand, are new to the pet trade and quite rare.

What Are Mongolian Gerbils?

Mongolian gerbils (Meriones unguiculatus) are popular pets due to their friendly temperament and ease of care. They are sociable, inquisitive animals and are easy to feed and keep clean.

They are also small and easy to handle. Mongolian gerbils don’t grow larger than 5 to 6 inches (not including their tail). They form bonds of trust with owners and can be taught some simple tricks.

In the wild, Mongolian gerbils live in the desert and semi-arid areas of Mongolia, Russia, and China. They live in complex underground burrows, which they dig themselves. In captivity, gerbils enjoy digging deep tunnels in their bedding.

Mongolian gerbils are social animals. In the wild, they live in groups of up to 17. According to Animal Behavior, their groups have a complex social structure, with larger gerbils outranking small ones. As pets, you should always keep at least two gerbils together, as they can become lonely.

If you ever see a gerbil for sale, but its species isn’t specified, it’s probably a Mongolian gerbil. They are usually just referred to as ‘gerbils.’ They are often considered the best gerbil breed for pets due to their availability.

What Are Fat-Tailed Gerbils (Duprasi Gerbils)?

Unlike Mongolian gerbils, fat-tailed gerbils (Pachyuromys duprasi) haven’t long been introduced to Western countries. They are still quite hard to find as pets, even in exotic pet stores.

Also known as duprasi gerbils or doops, fat-tailed gerbils originate from Africa. They are found in the northern Sahara desert and were first discovered in Algeria. They are around 4 inches long, with thick fur and a slightly flat body.

Fat-tailed gerbils come from dry climates, and they have a special adaptation to help them survive: their tail.

Duprasi gerbils have a thick, club-shaped tail, which they use to store fat and water. It functions in much the same way as a camel’s hump. Their tail can be used as an indicator of their health. If it’s thin, there’s something wrong.

Fat-tailed gerbils also dig burrows, but they are much simpler and shallower than Mongolian gerbil burrows. They don’t tend to do much digging in captivity.

According to the CDC, it is illegal to import rodents of African origin into the United States. This means that fat-tailed gerbils are currently quite rare in the U.S., but their popularity is increasing.

Differences between Mongolian and Fat-Tailed Gerbils

Mongolian and fat-tailed gerbils both belong to the same subfamily of rodents, Gerbillinae. They look and act similarly and have comparable care requirements. But there are many differences between these two types of pet gerbils.

Both types of gerbils are furry. But the fur of a fat-tailed gerbil is much thicker and fluffier. This gives them a chubby, stout appearance. Their bodies also appear flatter when viewed from the side.

Wild-type Mongolian and fat-tailed gerbils are similar in color – golden agouti. But Mongolian gerbils also come in around 40 different gerbil coat colors, bred from rare mutations. You can get them in black, lilac, red, and Siamese colorpoint.

Currently, fat-tailed gerbils are only available in their wild coloration.

Mongolian gerbils cannot be housed alone. They’re highly social animals and, to be happy, they must have the company of their own kind. It’s best to purchase two same-sex gerbils from the same litter, as there is less chance they’ll fight.

They also need room because they like to dig tunnels. You’ll need to set up a large gerbilarium with at least 10 gallons of space per gerbil. There should be a glass tank at the bottom, filled with 5-6 inches of substrate. Attach a cage on top to house the food dish, water bottle, and any toys.

A cage designed for hamsters is usually adequate for a fat-tailed gerbil. They don’t tend to bother digging tunnels, so an inch or two of bedding is adequate. They should be housed individually, as they tend to fight when living together.

No matter which type of gerbil you choose, they will both need the following:

Both Mongolian and fat-tailed gerbils have similar diets. They are omnivores, meaning they can digest both plant and animal matter.

Commercial gerbil food usually consists of a mixture of nuts, seeds, hay, grains, corn, and soy meal. These ingredients may be separate or extruded and formed into homogenous-looking pellets or ‘biscuits.’

Either type of food is fine, but the pellet kind is slightly better. This is because gerbils can’t pick out the tastier parts and leave the healthy elements behind.

You can also supplement your gerbil’s diet with fresh fruit, vegetables, and occasional treats such as nuts. As an added protein boost, gerbils also enjoy the occasional dried mealworm.

Allow each gerbil roughly 1tbsp of gerbil food mix per day. Fat-tailed gerbils may eat slightly less, as they’re smaller. You’ll have to buy twice as much food for Mongolian gerbils anyway, as you’ll own a pair of them.

Both Mongolian and fat-tailed gerbils have friendly dispositions. This is the reason that they were introduced to the pet trade. No one wants a pet that doesn’t like them or will bite them.

Both types of gerbil can, over time, grow to trust their human owners and enjoy their company. The more time you spend with your gerbil, the more they’ll get to know you. Both gerbil breeds tolerate and enjoy being handled. But there are some differences in temperament.

Mongolian gerbils are active and always on the go. They sleep in short bursts throughout the day and night and spend most of their time digging and exploring. If you pick them up, they won’t sit still in your hands.

Fat-tailed gerbils, on the other hand, are lazier. They sleep for most of the night and take frequent naps in the daytime. When they are awake, they’re slow-moving and relaxed.

Neither fat-tailed nor Mongolian gerbils are particularly susceptible to any type of illness. So far, no breed-specific health problems have been identified.

Gerbils are quite hardy creatures. But they are susceptible to specific health problems, and both species are equal in this regard. The most common health issues associated with gerbils are:

Gerbils can also become injured if they fall from a height or attack one another. Fat-tailed gerbils are less agile and more prone to falling from wheels and shelves.

Due to this, Mongolian gerbils are quite cheap to buy. A single gerbil usually costs between $10 and $20. Some stores and breeders offer deals if you want to purchase two or more (which you should).

Rare coat colors and patterns, such as Burmese, blue, pied, and slate can sometimes be more expensive. Not as expensive, however, as fat-tailed gerbils.

Fat-tailed gerbils only entered the pet trade in the early 2000s. They are quite rare and hard to find, particularly in the U.S., where it’s illegal to import them.

Pet stores don’t sell fat-tailed gerbils, so you’ll have to seek out a specialist breeder. If you do find one for sale, expect to pay up to $100+ for one.

Gerbils, like most small animals, don’t live long. Their tiny hearts work hard to sustain them, and they can’t survive forever. But there are definite differences in the life expectancies of Mongolian and fat-tailed gerbils.

Mongolian gerbils typically live for 2 to 5 years. Fat-tailed gerbils are slightly harder and will usually live from 3 to 8 years. Their lifespan is still a bit of a mystery, as they haven’t been studied as much.

The lifespan of an individual gerbil can’t be guaranteed. It will depend on how well you care for it, health problems, and the genetic lottery. But a fat-tailed gerbil would be the safer bet if you want a pet that lives longer.

Is a Mongolian or Fat-Tailed Gerbil the Best Gerbil Breed?

Whether you think the best breed is Mongolian or fat-tailed is a matter of personal preference. It depends on what qualities you’re looking for in a pet and what level of care you can offer.

You should make your decision based upon which species feels right for you. Both Mongolian and fat-tailed gerbils make good pets and will bring years of enjoyment to the right person. Here’s some information on whether gerbils or hamsters are better pets.