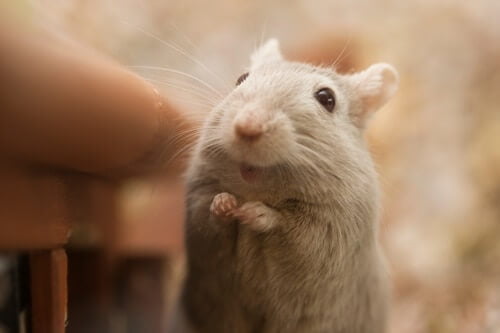 Few people know the main differences between gerbils and hamsters. They look similar because they’re both rodents and are small animals, but there are pros and cons to each of these rodent pets.

Most gerbils are larger in size. Once socialized and used to handling, neither pet is likely to bite. Gerbils don’t smell bad as they urinate less frequently than hamsters. Gerbils can learn commands, while hamsters are clever escape artists. Their care needs are about the same, but gerbils usually cost more as they need a companion.

Both pets have their advantages and disadvantages, so there isn’t a better pet perse. However, gerbils are less smelly animals, which can be a factor if you have limited living space. Gerbils are more likely to be awake during the day, which is likely to matter if you want to share the joys of pet ownership with a young family.

Hamsters vs. Gerbils as Pets

The most common hamster species is the golden, or Syrian hamster (Mesocricetus auratus). The most common gerbil species by far is the Mongolian gerbil or jird, Meriones unguiculatus.

Hamsters and gerbils are from different parts of the world. Almost all pet gerbils are Mongolian gerbils, which are from central Asia, as their name suggests.

But those outside of America can choose between the Mongolian and fat-tailed gerbil (which are from Africa). Most pet hamsters are from the near east, i.e., Syria and nearby countries.

Hamsters aren’t quite as curious as gerbils, but both species are energetic. If they aren’t moving around their enclosure, gerbils and hamsters will be running in their wheels instead. This can be quite loud, especially at night.

Differences between Gerbils and Hamsters

Once you know the difference, it’s easy to tell gerbils and hamsters apart. The main physical differences are as follows:

It’s impossible to tell the difference between hamsters and gerbils from color. Both have lots of different colors. That’s because they have each been selectively bred into interesting colors.

The most obvious difference is the tail, so this is the quickest way to tell gerbils and hamsters apart. Some hamsters don’t have a tail at all, and at most, it’s around an inch long. Most gerbils’ tails are as long as the gerbil’s body.

Can Gerbils and Hamsters Play Together?

Gerbils are a social species. They like to interact with other gerbils and get lonely if they live on their own. They also like spending time with people, which makes them great pets.

Some breeds of hamsters are social in the same way. However, many aren’t and prefer being alone. These hamsters, of course, can’t be left with other hamsters, let alone gerbils.

But even social hamsters and gerbils can’t get along. If you were to leave a gerbil with a hamster, the pair would fight. That applies to males and females.

This is because each species sees other species as a threat to them. In the wild, every animal competes for food. Whether that’s predator vs. prey, or two prey species fighting over territory with lots of food in it, this means that different species fight each other.

This applies in captivity as well as in the wild. A captive gerbil and hamster pair would fight rather than play.

Are Gerbils or Hamsters Bigger?

Juvenile hamsters and gerbils don’t differ much in size. Both start out much smaller than their respective adult sizes.

Gerbils are bigger than hamsters, but not by much. It’s primarily their tail that makes them longer. Adult Mongolian gerbils grow to around five or six inches long. Their tails add another four or five inches to their overall size, making them about ten inches long.

Great gerbils, which are bigger, grow up to 6-8 inches (and then their tail makes them even longer). Gerbils are heavier bodied than hamsters, too. The average weight of a Mongolian gerbil ranges between 70g and 135g.

Each part of their bodies can vary in size, too. Gerbils have longer hind legs and feet. They also have longer tails. Both pets have big, round, black eyes that people think are cute. Gerbils are bigger in size but not proportionally.

Are Gerbils or Hamsters Friendlier?

Both gerbils and hamsters can be social animals. According to the Journal of Mammalogy, gerbils must live with other gerbils in the wild and captivity. If they don’t, they will get lonely, and it will shorten their life expectancy.

The only issue with gerbils is that they can have seizures when shocked or in new environments. These seizures are similar to epileptic fits in people. They don’t seem to do the gerbil much long-term damage.

They can be avoided somewhat by ensuring your gerbil gets enough magnesium in its diet. But this can mean that gerbils are less friendly and more skittish with new people or in new areas.

While not all hamsters enjoy handling, most react positively once they’ve been socialized and no longer see you as a threat. Avoid over-handling your pets, and make sure that they can always see you when you approach.

Do Gerbils Bite more than Hamsters?

The frequency with which gerbils and hamsters bite is related to socialization and trust. When a hamster is young and getting used to people, it will bite more frequently. Only with time will your hamster get used to you handling it. Gerbils bite slightly less frequently than hamsters.

Rodent bites do hurt as their teeth are small, sharp, and can puncture the skin. Gerbil bites hurt as much as a hamster’s bite does. When either animal bites:

Do Gerbils or Hamsters Cost More?

Hamsters and gerbils cost roughly the same amount. While they are different species, their care is quite similar. There are several costs you have to consider the cost of the following:

The initial cost of buying a hamster or gerbil is roughly equal. A gerbil’s enclosure may cost a little more because you need one that isn’t made of plastic. All the equipment and enclosure ‘furniture’ you need to buy is the same price.

However, gerbils may cost more overall because you can’t only buy one. You need to buy at least two when you first get gerbils. That’s because gerbils are highly social and will be lonely otherwise. But considering gerbils cost $10 or $20, that isn’t a significant cost.

The only big difference is the cost of the substrate. Gerbils need more substrate because they like to dig. A substrate is what lines the bottom of your pet’s cage. It simulates your pet’s natural environment and soaks up wee or poo they leave behind.

Do Hamsters or Gerbils Smell More?

Both hamsters and gerbils are thought to be smelly pets. Rodents generally are, especially rats and mice, which have a distinctive odor. There are several reasons why rodents smell:

Gerbils are much less smelly than hamsters because they don’t go to the toilet as much. Mongolian gerbils, the most common kind, have evolved to conserve water instead of drinking all the time.

That’s because they’re from a dry part of the world. They live in deserts and steppes (like a desert, but grassy and rocky instead of sandy). Without constant access to water, they need to conserve fluids. This behavior carries over to captivity, even if they do have a water source.

All that being said, neither pet will be that smelly if you take good care of them. Cleaning their tank regularly will stop any rodents from smelling too bad. Replace their substrate regularly, and when you do, wipe the tank down with antibacterial spray. This will prevent the worst of any smells.

Are Gerbils or Hamsters More Intelligent?

According to Nature, gerbils can even learn to understand basic sounds. In their experiment, two researchers taught gerbils to recognize vowel sounds like ‘oo’ and ‘ee.’ This is similar to how dogs learn to understand certain words (although gerbils are not as good at this as dogs are).

Of course, there’s not much use in teaching your gerbil things like this. But it means that they’re smarter than hamsters.

According to Hearing Research, gerbils start showing signs of old age (like going a little deaf) between 2-3 years. But with good care, they can survive for 2-4 years. Hamsters don’t tend to live as long, surviving for 2-3 years.

Crucially, take good care of your pet. Feed them a good diet and keep them in an appropriate enclosure, and they’ll survive to the upper end of this average. The problem of low life expectancy is compounded by neglect, including:

Gerbils and hamsters are similar in the care they need. Both species are kept in a small enclosure lined with the substrate. Both species need a grain or seed mix to eat and access water. Both can be handled., although gerbils react better to handling.

While not that different from one another, both gerbils and hamsters need less care than other pets. This makes them both attractive for new owners who aren’t used to pets.

Both animals like burrows. However, while hamsters are happy with premade tunnels, gerbils aren’t. Gerbils like to dig their own tunnels and burrows. They need deep substrate in their enclosure, which hamsters don’t. This makes them slightly more expensive and difficult to care for.

This also means that your gerbils will need a bigger enclosure than a hamster would. Check that you have the space available before buying one. These enclosures aren’t difficult to find and aren’t any more expensive than your average hamster cage.

Hamsters can live in plastic enclosures with no negative effects. However, gerbils can’t. That’s because they can easily gnaw through plastic and get out. Ideally, your gerbilarium (as it’s known) should be made of glass or thick wire. Some come with two sections, one of each material.

Neither eats meat regularly, although both can eat insects. The only circumstance in which they eat meat is when they’re starving, in which case they resort to cannibalism. Both gerbils and hamsters are known to do this. They also may eat their young if there are too many for the mother to feed.

Both gerbils and hamsters require constant access to a water source. Some people think that gerbils don’t, but they do. They are from a dry part of the world, so they are accomplished at conserving water. But that doesn’t mean they don’t need any water.

Gerbils make a good pet. But in truth, the experience of owning one isn’t significantly different from owning a hamster. The two pets are more different than people realize, but not enough to mean they make different kinds of pets.