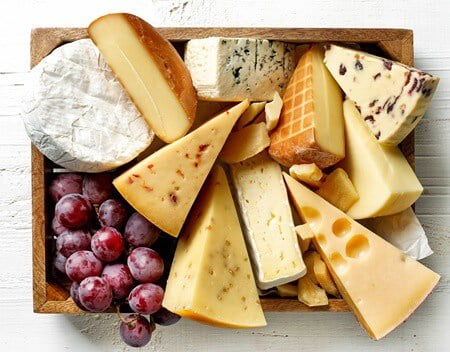 Cheese is a foodstuff that’s made from milk. It isn’t found in a gerbil’s natural habitat, so it isn’t something a wild gerbil would ever encounter. But that doesn’t mean your pet can’t eat it.

Gerbils can eat cheese, but only in small quantities as they’re lactose intolerant. It has too much fat and protein and not enough carbohydrates. Cheese has nutrients like vitamins A, B2, and B12, calcium, phosphorus, and zinc, which offer health benefits.

Lactose intolerance can cause diarrhea, bloating, and discomfort. So, provide your gerbil with snacks that are more nutritious and don’t cause digestive problems.

The issue is that gerbils are lactose intolerant once they are weaned. Weaning is the process that all mammal babies go through where they stop drinking their mother’s milk. In gerbils, this happens at around four to five weeks.

Once a gerbil is weaned, it eats regular solid food like fully-grown gerbils do. It will then never drink milk again for its whole life. This is partly an evolutionary choice and partly a physical necessity. The gut stops being processing lactose, a kind of sugar found in milk.

Cheese isn’t as bad for an adult gerbil as milk. Aged cheeses, like cheddar, have gone through a process where bacteria eat lactose and replace it with lactic acid. Lactic acid can be digested even by animals with lactose intolerance.

Gerbils, like most rodents, will eat almost anything. Gerbils live in a wild part of the world that doesn’t have much food. So, they have to eat what they can, when they can find it.

They’re especially attracted to foods that have lots of calories in a small morsel. Cheese has lots of fat and protein, which means that eating only a little can fill up your pet. So, gerbils enjoy eating it.

Cheddar cheese is the most common kind of cheese. You’ll find it in almost any store, and you may already have some in the fridge. It’s an aged cheese, which means it has to mature over a long time.

Cheddar is one of the better cheeses that gerbils can eat. The aging process allows bacteria to process the lactose in cheddar. It’s turned into something that your pet can digest instead (lactic acid). Also, much of the whey is drained away before the cheese is made. The whey contains most of the lactose.

Other cheeses are low in lactose, too. These include parmesan and Swiss cheese, as well as cottage cheese and ricotta. If you’re unsure whether a particular kind of cheese is high in lactose, check the ingredients. The lower the lactose, the better.

What is a problem is that cheese puffs are empty calories. They contain lots of carbohydrates, which isn’t a problem for gerbils. But they also don’t contain any vitamins or minerals.

So, they won’t cause any side effects, but they’re not suitable for gerbils at all. It’s advisable to feed your pet something else. Fruits, vegetables, nuts, and seeds are all better choices.

Cheese and onion crisps/chips, and any similar variety, are the same as cheese puffs. They contain lots of calories but without the nutrients that gerbils need. They don’t have enough protein or the minerals and vitamins gerbils needs.

Another negative is that chips contain the wrong amount of fat for a gerbil. Gerbils need between 5 and 10% fat, which is far less. So, chips can make your gerbil fat.

Chips contain far too much salt for a healthy diet. This is exacerbated by the fact that gerbils don’t drink much water, and salt is dehydrating.

Nutritional Value of Cheese for Gerbils

Cheese is nutritionally different from a gerbil’s regular food. Milk is formulated to be suited to a baby’s needs, which means that it contains lots of protein fat, but hardly any carbohydrates. While animals do need protein and fat, they don’t need as much as is in milk.

This issue applies to cheese, which has much the same nutritional make-up as milk. According to Nutrition Value, here’s what nutrients can be found in cheddar cheese:

These figures mean that 3% of cheddar cheese is carbohydrate, 23% is protein, and 33% is fat. These ratios are far from what a gerbil needs. A gerbil needs at most 15% protein in its diet and 5-10% fat. The rest of its energy should come from carbohydrates, which cheese has almost none.

So, if you were to feed your gerbil lots of cheese, it would become unhealthy. If you fed it as part of your pet’s regular diet, it would quickly become overweight. You shouldn’t feed it frequently, if at all.

Vitamins and Minerals in Cheese

The physical amounts of each of these nutrients are tiny. But cheese contains lots more of them than many other foods. It also contains traces of other vitamins and minerals, such as:

Cheese has lots of minerals and vitamins that are good for an animal. It contains far more than other gerbil snacks, e.g., fruits and vegetables. So, cheese isn’t the worst snack you can feed to your pet.

Health Benefits of Cheese for Gerbils

Cheese doesn’t have any particular health benefits that other foods don’t have. While it does contain protein and fat, both of which gerbils need, it contains far too much. If your gerbil ate nothing but cheese, it would become unhealthy.

Also, gerbils seem to get all the vitamins and minerals they need from regular food. They don’t need ‘superfoods’ or supplements like people do.

The one mineral that gerbils need is magnesium. This mineral is instrumental for brain health. Gerbils can have seizures, especially when they’re young. But magnesium can help to prevent this from happening.

Side Effects of Cheese for Gerbils

Cheese isn’t poisonous for gerbils, so it won’t kill or hurt your pet. But it can cause digestive problems, which are unpleasant and painful.

These digestive problems are caused by lactose intolerance. The root of the issue is the body’s inability to digest lactose, a kind of sugar mainly found in milk, cheese, and other dairy products.

According to the journal Nutrients, the body has enzymes called ‘lactase,’ which are present in the gut. Lactase is needed to break down lactose into two other sugars, called glucose and galactose. These enzymes are produced in an infant’s body, but the body stops producing them if it doesn’t continue to eat dairy.

When a gerbil weans (stops drinking its mother’s milk), it also stops producing lactase. This means that lactase travels through the gut without being digested. This causes problems, including:

This applies to gerbils as it applies to people because the underlying mechanism of intolerance is the same. These side effects won’t kill your gerbil but aren’t pleasant. Diarrhea can also cause infection, which is a further issue.

How Much Cheese Can You Feed a Gerbil?

If you’re familiar with lactose intolerance, you’ll know that it is variable. This depends on the level of intolerance, which depends on how much lactase the body produces. This can range from none at all to enough to fully digest dairy products (complete tolerance).

Your gerbil is likely entirely intolerant because it won’t have eaten any dairy since it was weaned. Its gut likely contains no lactase at all. If that’s the case, then even a small amount of cheese will cause the side effects listed above.

But some cheese doesn’t have much lactose. Aged cheeses don’t because the bacteria which form them eat the lactose. The lactose is turned into lactic acid, which can be digested without issues.

Even lactose-intolerant people can eat these certain kinds of dairy. Quark, for example, is a kind of cheese that isn’t aged at all. It’s formed by curdling cheese and draining the whey, then pressing the curds. Because the lactose is in the whey (the liquid), this cheese contains almost no lactose.

If you were to feed your gerbil a low-lactose dairy product, it wouldn’t experience the problems above. But even then, cheese should only be fed as a snack because it has the wrong nutritional make-up. Gerbils need more carbohydrates. So, at most, feed your gerbil half a teaspoon of cheese/half its food in one sitting.

How Often Should You Feed a Gerbil Cheese?

So, are gerbils allowed cheese? Because it isn’t the healthiest food, you should only feed it to your pet once a week. You can feed your gerbil a little cheese as a snack along with its normal food.

If you were to feed your gerbil cheese more frequently, it would gain weight. That’s because the high fat and protein content in cheese can quickly make your pet heavier. But if you only feed cheese infrequently, this shouldn’t be an issue.

Ideally, don’t feed your gerbil any dairy products at all. The issue of lactose intolerance, plus cheese’s high fat content, means that it is an unsuitable food for gerbils.