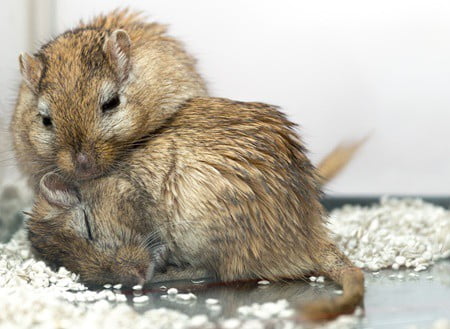 If your gerbil has stopped moving, and feels cold to the touch, you’re understandably concerned about your pet’s welfare. This is normally due to a severe health problem, or worse, so you need to take swift action.

Health issues that can lead to lifelessness in gerbils include respiratory infections, strokes, heart attacks, and Tyzzer’s disease. It may be incurable. It could also be hypothermia from a cold cage. But if the symptoms are mild and transient, there may be no health problem. If your gerbil isn’t moving or breathing, it may already be deceased.

A dead gerbil doesn’t move, of course. But neither does a sick one, or one with hypothermia. So, you can treat the symptoms together as they usually have the same cause. Cross-check your gerbil for other symptoms, which may tell you more about the illness. See a vet if you’re in any way unsure.

How to Tell Why Your Gerbil is Cold

Is a Cold Gerbil Always Ill?

Not every time you’ve been too cold has it been because you’re ill. Sometimes you feel cold for no reason. You may think your gerbil feels cold, but in reality, it’s a normal temperature for your gerbil.

The same applies to gerbils that don’t move much. Gerbils spend roughly half of the day asleep or at least resting. The rest of the time, they’re awake. So, your gerbil may only be a little less active than usual.

It’s normal for a pet owner, especially a first-time pet owner, to worry. You could take your pet to the vet to see if there’s a serious issue or not. However, stillness and coldness aren’t usually good signs.

How to Tell If a Gerbil Is Dead

If your gerbil has passed away, you can easily tell. Coldness and not moving are the two main symptoms. You can spot these immediately, because when you pick your pet up, it doesn’t respond at all.

When a mammal dies, its cells stop producing body heat. That’s because everything shuts down. The circulatory system stops pumping blood and delivering energy to the cells, so they have no energy to burn.

However, it takes time for a dead gerbil to become completely cold. That’s because it may still have some residual heat, left over from when it was alive. So, if it died five minutes ago, it may still be warm.

What to Do When Your Gerbil Dies

You must dispose of your gerbil somewhere safe, because it will eventually start to decompose. Burying it in the yard is a good choice.

Ideally, you should get another. Gerbils are social creatures, and become upset if they’re left alone. Your deceased gerbil’s old friend would grieve for it, and would become depressed. It needs some company.

To do so, you’ll need to use the split cage. You can’t put two stranger gerbils together, because they’ll fight. Put one in one side of the split cage, and the other in the other. Swap them around at least once a day. This gets them accustomed to each other’s smell.

Eventually, you should notice the pair staying near the divide in the cage. This indicates that they have bonded. They can then live together, and your old gerbil will be happy again.

How to Tell If a Gerbil Is Sick

If your gerbil is sick, it can have many different symptoms. You may notice that your gerbil has a runny nose or diarrhea. But not all sick gerbils show it in the same way, so you have to rule out health issues one by one.

The list below details the most common health issues, and what other symptoms they’re associated with. Each of them is associated with coldness and not moving when they become serious enough. Run through it to see if the symptoms match those of your pet.

According to the journal Digestive System, the symptoms of Tyzzer’s disease are not all visible. It affects the liver, which you can’t see from the outside. But the other symptoms are visible.

Each of these conditions can occur without your gerbil feeling cold, or not moving. But in the latter stages of each issue, both of these symptoms can be apparent. Time taken before treatment is of the essence.

What to Do If a Gerbil Is Sick

Take your pet to a vet who specializes in smaller animals, like rodents. A vet who mostly sees rodents will be more familiar and capable of helping.

Recommendations could involve changing your gerbil’s living environment, e.g. making it warmer or moving it. There may also be a medication that the vet suggests you administer. Do whatever your vet suggests.

Can Gerbils Get Hypothermia?

Being too cold can also be a condition rather than a symptom. According to the BMJ, hypothermia is when the body temperature goes too low. As it lowers, it causes problems, because the internal organs need a certain level of heat to function.

Gerbils can get hypothermia because their environment is too cold. Your gerbil’s cage should be room temperature, i.e. between 65 and 75 degrees. Significantly lower than this can make your gerbil too cold.

My Gerbil Is Breathing but Not Moving

If your gerbil is still breathing, but isn’t moving at all, it’s likely close to death. This is what happens when your gerbil is severely ill, no matter what the symptoms. You will even notice it when the health issue is a kind of trauma, as opposed to a disease.

When your gerbil reaches this stage in its health, there’s nothing you can do to help it. Its lack of movement indicates either severe lethargy or paralysis. And if it’s cold too, then it’s close to death, even if it is still breathing.

A vet wouldn’t do anything for your gerbil as the symptoms are already too severe to be reversed. The vet may suggest euthanasia, although your pet will die on its own soon anyway.

Make your pet more comfortable. Put it into its burrow, or alternatively, somewhere else that’s warm and comfortable. You could try hand feeding it or offering it water, although it may not want anything.

Gerbil Not Moving Back Legs

Stroke is another health condition that causes paralysis and coldness. Your gerbil may struggle to move its back legs, either one or both. It will still be trying to move its front legs, or moving its head. But its rear legs can’t or won’t move. This occurs because the gerbil’s brain is damaged by the stroke.

When a stroke occurs, it has a debilitating effect. The gerbil will be lethargic, but will also lose the use of one or more of its limbs. It’s usually the rear limbs that are affected, but any leg can be. The leg will be completely paralyzed.

Gerbils are susceptible to stroke, much more than other pets, and more than people. That’s because the blood vessels in their brains aren’t fully formed. This means that a blockage and a subsequent hemorrhage is more likely.

Sometimes, a stroke is minor, and doesn’t have such a bad effect. But in the case of paralysis, this indicates that the stroke was very bad. The level of trauma depends on how large the hemorrhage was.

However, that doesn’t mean that your gerbil will be paralyzed forever. It can regain the use of its limbs over time. But whether this happens or not is down to luck, and according to Molecular Medicine Reports, exercise.

If you took your gerbil to the vet, they may recommend euthanasia, but it’s your choice whether to do that or not.