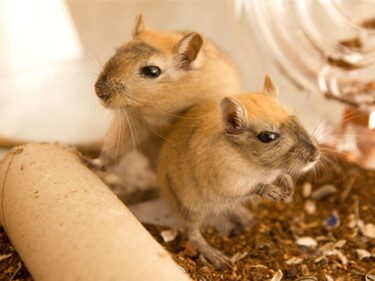 Gerbils are warm-blooded mammals, and produce their own body heat like us. Also, like humans, they can get cold in the winter. Low body temperatures can lead to health issues.

Gerbils do feel the cold, but have strategies they use to survive. They huddle for warmth, produce extra body heat, and stay in their burrows over the winter. The optimal temperature for a domesticated gerbil is between 65 and 75 degrees.

Gerbils can survive in cold weather, but they’ll thrive at the optimal temperature. You can maintain this temperature with your home’s heating system, and by placing your pet’s cage out of drafts.

Do Gerbils Get Cold?

Gerbils get cold like any other animal. When the temperature drops, as a mammal, the gerbil must produce more body heat than it usually does when it’s warm.

However, this isn’t easy. It puts lots of strain on the body. Each cell has to burn extra energy, which comes from the gerbil’s food. So, gerbils need more food, burn up their fat reserves, and have their bodies working extra hard to maintain the optimal body temperature.

Temperatures can get low enough that a gerbil can die. This can happen to any animal, either warm or cold-blooded. What happens is that the core temperature drops, meaning that the organs can’t function properly. Organ failure is quickly followed by death.

According to the Journal of Thermal Biology, gerbils are capable of surviving consistently bad weather. And it’s only extremely low temperatures that cause this issue.

If you know lots about gerbils already, you may know that they live in deserts. The most common pet is the Mongolian gerbil. This gerbil lives in the Mongolian steppe, and some parts of the Gobi Desert nearby. Other species live in other deserts.

However, these areas aren’t like you’d imagine. The Mongolian steppe is dry and has sandy soil. While there are a few sand dunes, most of the massive region is grassland.

The temperature also varies hour by hour. Because the region is so flat and open, with almost no trees, there’s no shelter. So, when night falls, things get cold fast. But gerbils can survive both this and the winter months with ease.

Do Gerbils Get Sick in Cold Weather?

The main issue with cold weather is that your gerbil’s organs may not work as intended. But it’s only in freezing weather that this will happen. The gerbil has many defense mechanisms against the cold, which we will see in a moment.

However, even temperatures slightly lower than usual can cause ill effects. Less-than-optimal temperatures make the immune system weaker, which makes illnesses worse. So, if your gerbil has a respiratory infection, this could make it worse.

And because cold temperatures make your pet inactive, this can compound the effect. Your gerbil won’t eat as much as it should. This makes your pet feel even worse. Not eating, coupled with a weak immune system, can make a regular illness much more severe.

How Do Gerbils Survive Cold Weather?

There are several ways that gerbils get through cold snaps. Some of these are unique to mammals, others unique to rodents and similar animals. Each technique helps in its own way, and together, they allow the gerbil to survive.

The central use of fur is to keep the animal warm. The fur traps the body’s heat, to make energy use a little more efficient. The longer or thicker the fur, the more heat it can trap.

A gerbil’s fur isn’t that long. But it’s long enough to trap some heat, which is far better than nothing. It also stops things from touching the skin, acting as a coat.

One way in which gerbils avoid the cold is through digging burrows. Many animals dig burrows, including mammals. Burrows can be shallow or deep, but the purpose is protection.

The gerbil’s burrow is deep. It has a dozen or more entrances/exits, which are small and difficult to find. They are big enough for a gerbil to fit through, but no bigger, so predators can’t get in.

The entrances lead to tunnels, which run many feet underground. The tunnels are connected to large chambers, in which the gerbils spend their time. Because the area is so dry, there’s no chance of these tunnels flooding, so they’re safe in that way, too.

Each gerbil family has its own burrow. But often, the burrows of different families are connected. A gerbil could travel quite a long way, solely underground in its tunnels.

Either way, these tunnels keep gerbils warm. The cold weather can’t reach inside, and ideally, the chambers of the tunnels will be below the level of permafrost (frozen soil). As the gerbils give off body heat, the chambers can get much warmer than the outside.

The same applies to pet gerbils, which dig burrows too. If a pet gerbil were left alone in a cold house, it could stay slightly warmer by hiding in its burrow.

Hibernation is an extended period of rest, during which the animal’s heart rate slows. Its body temperature goes down too.

This helps it conserve energy. Because it needs to produce less body heat, the animal doesn’t burn as much fat. Both the lower heart rate and body temperature are required for true hibernation, as opposed to sleeping and general low activity.

Gerbils don’t hibernate like other animals do. Their heart rates don’t slow during the winter, and their body temperature doesn’t get lower. But what you will see is the gerbil being less active, albeit not to the point of true hibernation.

This helps the gerbil conserve heat because it goes outside less. Instead, the gerbil spends most of its time in the burrow.

Mammals produce body heat internally. They burn energy in each of our cells, which is known as endothermy. The purpose of endothermy is to keep the body running as it should.

A mammal’s internal organs need to exist at a certain temperature to perform optimally. At lower temperatures, they struggle. Low enough, and they shut down, the animal dying along with them.

The energy comes from the animal’s food. Foods contain carbohydrates, which are turned into sugars and burned directly. Alternatively, the food’s nutrients may be turned into fat, which can be turned into energy when there isn’t enough food left.

To combat low temperatures, an animal must burn extra energy. This won’t make it hotter than it usually is. Rather, the point is to maintain the same temperature level. For people, this level is 98.6 Fahrenheit. For other animals, it varies slightly, but is roughly the same.

So, a gerbil will burn the energy in its food for heat. It may also draw on its fat reserves. Once these run out, it will draw on its muscle reserves, breaking them down to release energy too.

Huddling Together for Warmth

Many wild and captive animals use this tactic in response to the cold. So, each animal uses energy internally to stay warm. However, this warmth cannot be confined fully.

The animal will give off heat. If the animal is in an enclosed space like a burrow, some of the heat will be trapped. But even so, most of the heat escapes. In a sense, this is quite wasteful, but there’s nothing an individual animal can do about it.

Gerbils are one such animal. They live in groups, both in the wild and in captivity. These groups can be of a dozen or more animals. Between them, they can create enough heat to stay cozy even when temperatures are low.

Again, you’ll see this in captivity as well as the wild. Your gerbils may spend lots of time together in their burrow. Inside, they are in close proximity, keeping each other warm.

How Cold Is Too Cold for Gerbils?

Gerbils are good pets because they are happy at average home temperatures. Between 65 and 75 degrees Fahrenheit is optimal.

According to a study by the National Renewable Energy Laboratory (Residential Indoor Temperature Study), this is roughly the temperature that most houses are kept at.

While the precise figures vary according to location, the mean temperature people heat their homes to is 67.2. The mean figure people cool their homes to is 74.6 degrees. So, it’s likely that you already keep your home within this comfortable range.

Gerbils are hardy. After all, they survive in -40 degree cold snaps in the wild. Even so, a minimum of 40 degrees Fahrenheit is advised for optimal health.

How to Keep Gerbils Warm in The Winter

The best way to keep your pets warm is to provide them with an adequate enclosure. This will provide your pet with some protection, even if it’s far too cold.

Keep the Heating On

This consistent temperature is perfect for a gerbil. It allows you and your pet to stay comfortable all year long. This is ideal, because your pet won’t have to adjust or burn extra energy when it gets cold.

So, ensure that your thermostat is set to a comfortable temperature in the winter and summer. Don’t overcompensate by setting the temperature too high, because gerbils don’t like extra heat either.

Where to Put Your Gerbilarium

The location of the enclosure plays a big part in setting an adequate temperature. Say, for example, you put the cage next to a window. It could easily get too cold at night in such an exposed place. Instead, place your pet’s cage somewhere that:

You may think that direct sunlight would keep your pet happy and warm. This is true to an extent, but usually sunlight is far too hot.

That’s because your pet’s cage absorbs heat and doesn’t let it go. Think of a car in a sunny spot: it can get far too hot inside. Your pet’s cage is the same. It can get so hot, that it can kill your gerbil.

A heat mat is a broad mat like a mouse mat, which is plugged in and gives off heat. It’s used for many common pets, although not usually mammals.

Your gerbil shouldn’t need a heat mat. It would only need one if the room was too cold for you. Heat mats are intended for cold-blooded animals, such as snakes, which don’t produce body heat.

If the house is left to get cold, e.g. when you’re on vacation, then a heat mat may not be a bad idea. It would keep your pets warm without leaving the heating on and wasting money. However, there would still be issues that may arise:

Keep Your Pet Out of Drafts

A cold draft can mean that your gerbil’s environment isn’t suitable. Movement of air keeps your home cool, which can be a good thing, but in this context is a bad thing.

A constant draft, especially, will cool your gerbil down too much. This can be accidentally achieved by opening two windows in your home and allowing a through draft in. This constant movement of air would have benefits, e.g. stopping your gerbil’s cage from smelling. But it would be too cold.

There are two ways to avoid this issue. You could avoid putting your pet’s cage in drafty places like:

Or, you could protect your gerbil’s cage from the draft by covering it with a blanket.