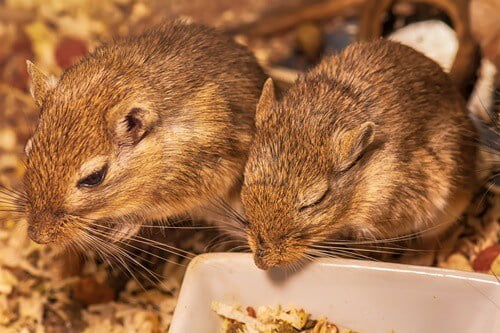 If your gerbil is sleeping all the time or is unusually inactive, you may think it’s hibernating. If it’s winter, most pets like gerbils are slightly less active than usual anyway.

While some rodents hibernate, gerbils don’t. Hibernation is a deep sleep during which body temperature, heart rate, and metabolic rate all drop. Gerbils don’t do this, although they may be less active or even lethargic in the winter. Even if they did, warm indoor temperatures should prevent hibernation.

If your gerbil is lethargic because of the temperature, increase it to between 60 and 70 degrees. It may also be inactive because it’s sick, e.g., with a respiratory infection.

Gerbils don’t hibernate in the sense that other animals do. Hibernation is where an animal sleeps through the winter. Rather than eating, according to the Journal of Experimental Biology, it burns its fat instead.

Hibernation is a specific biological process that is central to the lives of some animal species. This isn’t something that gerbils do.

What gerbils have been known to do is sleep more during cold weather. If the temperature drops too low or weather conditions are cold and inhospitable, gerbils won’t come out of their burrows. They will spend most of their time sleeping.

This is distinct to hibernation, though. Hibernation is something specific that gerbils don’t do.

What you may notice is something called lethargy. This is a state in which your gerbil is unresponsive and sleeps all the time. It’s a bad sign that something’s wrong.

Hibernation is a dormant state where an animal becomes inactive for an extended period. It will spend the whole winter hidden somewhere out of the elements, hardly moving. It will be asleep throughout this time, only waking for brief periods.

But hibernation is more than a ‘deep sleep.’ The animal’s body and bodily processes go through several physical changes at this time. These are key to the definition of hibernation.

The point of hibernation is to conserve energy. It’s an evolutionary adaptation. During winter, warm-blooded animals have to maintain their body heat by burning even more energy because it’s so cold. This puts lots of physical strain on the animal’s body.

This is coupled with the fact that there’s less food. Potential prey animals may be hibernating, too. And plants that may have fed certain animals before will have died off in the fall or dropped their leaves.

It makes sense for an animal to remain dormant over winter. But gerbils don’t need to do this. Because they burrow together, they can keep warm enough to survive the winter without entering a deep sleep like hibernation.

Hibernation is a regular behavior in wild animals. But you may not observe it in captivity. That’s because hibernation is triggered by the environmental factors of light and warmth.

The entire purpose of hibernation is to avoid cold fall and winter temperatures. So, the animals that evolved to hibernate ‘learned’ to do so when temperatures got too cold. The second trigger is a lack of sunlight because it’s less sunny during the winter months.

Many animals that hibernate in the wild don’t do so in captivity. Indoor temperatures prevent the trigger point from being met. And indoor lights can confuse an animal’s seasonal body clock.

So, even if gerbils did hibernate, they likely wouldn’t in captivity as there’s no need to.

How to Tell If a Gerbil is Hibernating or Lethargic

Gerbils go inactive (lethargy) when temperatures get too cold, even if they don’t truly ‘hibernate.’ The main sign is that your gerbil doesn’t move. Your gerbil will spend most of the day sleeping and won’t appear excited or excitable.

Your gerbil will also groom more during cold weather. According to the New York Academy of Sciences, that’s because it uses a special gland to produce a coating that keeps it warm. But aside from that, there are a few more things to look for.

Hibernating vs. Sleep in Gerbils

Don’t confuse regular sleep with hibernation. Gerbils are equal parts nocturnal and diurnal (active during the day). They can switch between the two and rest whenever they want. This behavior applies both in the wild and in captivity.

So, if your gerbil is asleep during the day, that’s normal behavior. Even if only one or two of your gerbils are sleeping, that’s still normal. Gerbils have strange sleeping patterns, and that’s nothing to worry about.

You can test the difference between sleeping and being overly lethargic. When a gerbil is sleeping, it can wake up quickly. So, if you pick it up, it may be unresponsive for half a second. But then it will wake up and look around, either confused or excited.

A lethargic hamster may not respond at all. You may pick it up, and it will hardly stir. This is an indication that something is severely wrong, and in the wild, it would die.

Why Is My Gerbil Hibernating?

If your gerbil is inactive, that’s a negative sign. Gerbils don’t hibernate, so it’s a sign of something bad. The reason could be a health condition or an environmental concern. There are several potential causes:

So, if you notice your gerbil is inactive, try to identify the cause. Check your gerbil’s health by giving it a once-over. If there seems to be something the matter, take your pet to the vet.

Is My Gerbil Hibernating or Dead?

It’s a sad occasion when any pet dies. You may think that it’s easy to tell when your pet has passed away. It is with other pets, perhaps, but not with gerbils. That’s because you can confuse their inactivity with ‘hibernation.’

When gerbils are inactive, they aren’t permanently inactive. You may be imagining a big, wild bear hibernating for the entire winter. Animals like bears that go through true hibernation will hardly move a muscle for months on end.

Unfortunately, gerbils don’t do this. When a gerbil becomes inactive, it is only largely inactive. It will still spend some time each day entering and exiting its burrow, walking around, and eating.

So, if your pet isn’t moving at all, it may have died. To check, reach into your gerbil’s cage and pick it up. If it’s sleeping, it will wake up. It should also still be warm. But if it’s cold and doesn’t react at all, your pet has likely passed away.

What to Do If Your Gerbil Won’t Move

If your gerbil doesn’t respond to your touch, don’t assume that it’s dead. It could be lethargic, in which case the condition may be fixable. Begin by checking the temperature around your pet’s cage. It should be between 60 and 70 degrees Fahrenheit.

If the temperature isn’t correct, adjust it. This should bring your gerbil back to good health. Crucially, if this is the issue, then all the gerbils in the same enclosure will be experiencing the same effects.

If this doesn’t work for your gerbil, take it to the vet. Complete lethargy is a late-stage symptom rather than an early-stage symptom. This means that whatever’s causing the lethargy has become severe. You can’t treat it at home.

The worst thing you could do is leave your gerbil alone. If you do, its condition could deteriorate. So, you should first identify lethargy and then take action to fix whatever’s wrong using a vet’s advice.