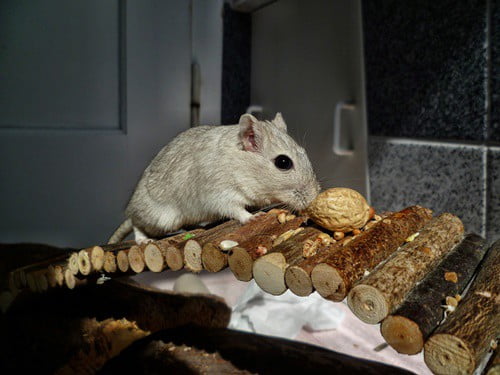 Hoarding is a confusing behavior, not least because captive gerbils have plenty of food. There’s no chance that your pet might starve under your care if it doesn’t bury its food and save it for later.

[It’s an instinctual reaction known as hoarding. Gerbils bury food so that some food will be available when there’s less. It also keeps the food fresher. Captive gerbils behave this way even though they don’t need to. You can stop your gerbils from burying their food by scatter feeding instead of using a bowl.

This behavior is common to most rodents, as well as gerbils. It’s useful in the spring and summer when an animal can save food for the colder months later in the year.

Table of Contents show
1 What Is Hoarding in Gerbils?
1.1 Why Do Gerbils Bury Their Food?
1.2 Nutritious Foods Are Scarce
1.3 Winter Is Difficult to Survive
1.4 Burying Food Keeps It Fresh
1.4.1 Gerbil Burying Food Dish
2 What to Do If Your Gerbil Buries Its Food
2.1 Should You Give Gerbils a Food Bowl?
2.2 Related Articles:

What Is Hoarding in Gerbils?

Hoarding is a frequently seen behavior in many animals. Rodents are well known for it. There are two main kinds of hoarding that animals use:

The key motivator of this behavior is survival. In most parts of the world, spring and summer offer plentiful food. New plants grow, and there’s enough food for almost all animals.

However, in the fall and winter, there’s far less food. Plants stop growing and die off. Animals hibernate for the season, and not just big ones, but little ones like insects too. There’s far less food, and animals can easily starve at this time.

A cache of food protects an animal from this seasonal change. When it looks for food and can’t find any, it can eat a small amount of its cache to survive.

Why Do Gerbils Bury Their Food?

The cause of a gerbil’s food-burying behavior is evolutionary. In the wild, gerbils that buried small amounts of food for later survived better than those that didn’t. Over time, this behavior spread to all wild Mongolian gerbils.

Doing so helps gerbils survive because they live in a harsh environment. The Mongolian steppe is like a desert. It’s a huge, wide-open space with no trees and few animals. The only things that grow there are small grasses and shrubs.

There’s not much for gerbils to eat. According to Behavioral Processes, when a gerbil finds lots of food that it can’t eat all at once, it will save some for later. If all the gerbils in a group do this, they can save up a lot of food to share.

Another advantage of this is that other competing animals will have less food to survive on. All animals compete for resources. Other animals which eat the same kind of food as gerbils could eat lots of this food, leaving less for the gerbils. But if the gerbils hoard it all at once, they get it all.

Some foods are more nutritious. A nut, for example, has more calories in it than the equivalent-sized amount of grass or leaves. These nutritious foods are scarce in the Mongolian steppe.

When a gerbil finds something this nutritious, it’s beneficial to hide it. A gerbil can fill up on less nutritious food for now and keep the nut for later. Then later, when it’s starving, its cache of nuts could help it survive for an extra week or two.

This is the same reason why many other animals, birds, and rodents included hoard nuts.

Winter Is Difficult to Survive

Some animals hibernate to escape the cold, although gerbils don’t hibernate. They need another tactic to survive temperatures of as low as -40 degrees Fahrenheit.

Having food saved up in a hoard is perfect for winter. Fewer things grow in winter, so there’s less food to find. Having a few nutritious seeds to live on is better than nothing.

Also, having a food hoard inside the burrow means that the gerbils don’t have to go outside. During the winter, it’s freezing. A gerbil could easily freeze to death. It would at least use more energy so that it could stay warm. Eating from the hoard is a better alternative.

The nuts and seeds that gerbils find in the wild are highly nutritious. But like all foods, they’re most nutritious when fresh. Burying foods helps keep them that way.

It does so by protecting the food from the elements. The Mongolian steppe is a dry, arid region. But if it were to rain, as it occasionally does, it could break the food down. Keeping the food underground prevents this from happening.

This applies to fresh foods, too. Fresh foods will go bad quickly, even if buried. But they go bad even quicker if left exposed to the elements.

You will see this behavior carried on into captivity. A captive gerbil doesn’t need to do this because you should be feeding it every day. But its behavior is so ingrained that it will anyway.

Something that encourages your pet to cover its food is if it’s in a dish. Your gerbil sees all the food at once in a dish as big as your pet is. To your gerbil, this looks like a vast bounty that should be stashed away. So, it will hoard some of its food and eat some of its food.

This fits in with our understanding of hoarding behavior. The purpose of hoarding is to set aside some food for when there’s no food later on. This prevents your gerbil from ever going too hungry and means it can keep surviving and breeding.

Captive gerbils can hoard food in one of two ways. It may take some of the food in its dish and go to bury it somewhere else. This place could be somewhere close to the surface of the bedding. Or, it could be inside the gerbil’s burrow.

Alternatively, it will take bedding and kick it on top of its dish. The dish likely won’t be completely covered, as that would require lots of loose bedding.

What to Do If Your Gerbil Buries Its Food

You will never stop your gerbil from burying food. This is an instinctual behavior that can’t be overcome. Gerbils know what they’re doing with their food and will eat whatever they need. They won’t starve themselves by burying a small amount of food instead of eating it.

Your gerbil also won’t forget where it buries its food. If it did, this wouldn’t be an effective survival tactic. Your gerbil has a good memory for its food hoard sites, so this won’t be a problem either.

However, be careful if you feed your pet any fresh snacks, e.g., vegetables. These foods go bad, even rotten, quickly. If your gerbil buries these foods in its burrow, they can rot and cause health issues.

Your gerbil’s bedding can contain lots of bacteria that hasten the rotting process, too. And the vegetables, in turn, will rot and spread the bacteria further. So, if you feed your pet fresh foods, check to see whether they bury any. If it does, clean it up later on.

Should You Give Gerbils a Food Bowl?

Giving your pet a food bowl exacerbates this behavior. Seeing a mound of food in one place is a crucial reason why gerbils try to bury some of it. Consider not putting one in your pet’s cage.

Rather than putting all the food in one place, consider feeding using the scatter method. According to PLoS One, this is where you scatter the food across the animal’s environment, not just in a bowl. This is good because it’s more closely akin to the natural way that gerbils feed.

In the wild, gerbils have to dig and forage for their food. They tear up grass roots and dig for seeds that have fallen on the ground. Your gerbil will enjoy foraging in this natural way. It will also be less inclined to bury any of its food.

This is also healthy because it encourages movement. Your gerbil will have to move around and dig up its food. This will keep it healthy in the long term.

This method isn’t perfect, though. If your pet’s bedding is dirty, then the food will come into contact with it. So, you should only feed your gerbil this way if its bedding is clean and dry.