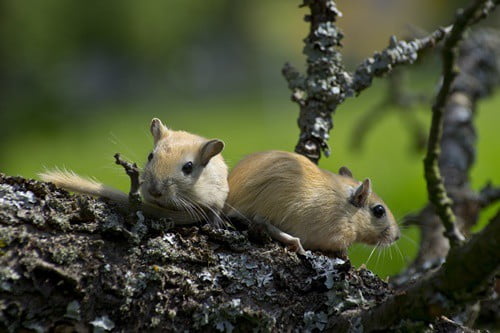 Gerbils are social creatures, so vocalizations are frequent. But if you hear your gerbil making weird noises, you probably won’t know what they mean.

Gerbils make noise to communicate, both with you and other gerbils. Gerbils squeak and thump their feet to frighten other gerbils or predators. They make ‘yipping’ sounds when excited. Gerbils also purr to show contentment, chirp to get your attention, and make clicking breathing noises when they’re sick.

If you learn what gerbil sounds mean, you can understand your pet much better. You’ll know when it’s happy or excited or when it’s in pain. This will help you care for your gerbil properly.

Gerbil Sounds and What They Mean

In the wild, gerbils live in large burrows in groups containing many gerbils. So, like any other social species, gerbils have learned to communicate.

These noises exist on a scale. So, chirping, clicking, yipping, and squeaking are all similar noises. Sometimes the gerbil will be louder than at other times. But normally, you’ll have to look at the context to figure out what kind of noise your gerbil is making.

You may also notice wheezing, thumping, and more. Each of these noises means something different. Figuring out what things mean can make it much easier to care for your gerbil.

For example, you could be holding your gerbil in preparation to play with it. If your gerbil is making loud yipping noises and bouncing around, it’s ready to play. If it’s sitting still and purring, it’s relaxed rather than excitable.

Can You Hear Gerbil Sounds?

You can hear all of the sounds listed above. Some are easier to hear than others. Squeaking is a high-pitched and loud noise that’s easy to hear, while purring can be quiet.

However, not all the noises that gerbils make are audible to people. According to PLoS One, most sounds are too high-pitched for human ears to pick them up. Other gerbils can hear them, though.

This is because you don’t need to hear them; other gerbils do. The journal Nature Communications says that gerbils have sensitive ears. This helps them communicate with other gerbils, as well as listen out for threats.

The squeak is the noise that gerbils and other rodents are known for. This loud, high-pitched sound can be surprising if you aren’t expecting it. There may be only one squeak, or a series of squeaks, depending on why your gerbil is squeaking.

If you have more than one gerbil, they may squeak at each other, too. Gerbils squeak loudly when they’re being aggressive and can be a precursor to a fight.

What Does Squeaking Mean in Gerbils?

Squeaking is a noise you’ll hear frequently. It has a few different causes. Squeaks can be a sign that your gerbil is frightened or threatened. Your gerbil may feel threatened because of:

By extension, squeaking is also a sign that your gerbil is in pain. If you hold your gerbil too tightly, for example, it will squeak. It will let out a series of squeaks if you don’t let it go.

Gerbils also squeak before and during a fight. Both gerbils will squeak in quick succession. There may also be other signs that a fight is about to occur. These include the gerbils facing one another with their noses pressed together and raised hair along their backs.

Why Does My Gerbil Squeak when I Pick It Up?

One of the most common sounds that gerbil owners notice is squeaking. This can happen when you pick up your pet. Unfortunately, because gerbils make lots of different noises, you can’t always tell why your gerbil squeaks.

There are two main reasons why your gerbil might squeak when you pick it up. It may be scared, or it may be excited. The noises a gerbil makes in these situations can be quite similar. You have to check for the different signs of your gerbil’s mood. Your gerbil is likely frightened if:

If your gerbil was frightened, there may be a problem between you and your pet. Get your pet used to you by spending more time near its enclosure and scooping it rather than picking it up from above. Never pick up a gerbil by its tail because it can cause damage.

Signs a Gerbil Is Excited

However, your gerbil may have been excited to get out of its enclosure. This is common in gerbils that like their owners. Signs that a gerbil is excited are as follows:

So, if you noticed these signs, then your gerbil is squeaking because it’s excited to see you. The time your gerbil spends with you is exciting, after all. Other than the times you take it out, your pet is stuck in its cage.

Away from the world of squeaks, your gerbils can also make happy noises. These show that your gerbils are happy with one another or with you.

One of the noises you’ll want to hear from a happy gerbil is purring. It sounds like a low rumbling noise. You may not notice it at first because of how low it is.

Gerbils make this noise in a different way to cats. Instead of using the voicebox, a gerbil will tap and grind its teeth together to create a rumbly sound. If your gerbil is purring, you can see its jaw moving slightly.

Another sign that your gerbil is purring is the vibration it creates. Because its teeth are tapping together, this creates small vibrations that you can feel. This is another reason why this noise is called ‘purring.’

It’s easy to confuse this feeling with fearful shaking. That’s especially the case if your gerbil is easily frightened or is excited because it’s let out of its cage. However, you can usually tell from your gerbil’s other behavior, whether it’s happy or sad.

What Does Purring Mean in Gerbils?

Gerbils purr when they’re happy and content in their surroundings. A purring gerbil doesn’t feel threatened by anything. It may be in the company of other gerbils and feeling happy. Much more common is when you’re holding it.

Gerbils especially purr when you show them affection. If you’re holding your gerbil and stroking it, it’s likely your pet will start to purr. It’s as if your gerbil is telling you not to stop petting it.

Is Purring Common in Gerbils?

Purring is a rare noise for your gerbil to make. Some gerbils don’t purr at all. This isn’t necessarily because your gerbil is unhappy. It may never have learned to be affectionate with people, in which case it won’t enjoy stroking like other gerbils do.

Other gerbils purr, but only rarely. All owners with gerbils that purr say that their pet is happy, content, and comfortable to purr. Otherwise, the gerbil will show other signs of happiness rather than purring.

Some gerbils purr all the time when you hold them. These gerbils tend to be friendly and affectionate, so make fun pets.

It sounds quite similar to squeaks but less urgent and quieter. This behavior begins early in life when young gerbils chirp for their mothers. It’s a way of getting the mother’s attention.

This behavior can carry on into adulthood. Your gerbil may chirp to get your attention, for instance, if it wants to play. It may also chirp generally when it’s excited.

However, this behavior is mostly confined to young gerbils. Most gerbils will grow out of it when they reach six months old when they’re independent. This also depends on how much you’ve bonded with your pet gerbil.

What Does Chirping Mean in Gerbils?

Whatever the precise reason, your gerbil will only chirp positively. It won’t chirp because it wants to be aggressive with you, for example.

This behavior is reserved for when your gerbil is the most excited. It’s something that gerbils do to show the other gerbils that they’re happy.

This is necessary because gerbils are social animals. They have to show their happiness, frustration, or anger. This helps them get whatever they might want. So, in this case, the gerbil wants to get other gerbils to play with it. Alongside these loud and excited yips, you may also notice your gerbil:

Why Is My Gerbil Making a Yipping Noise?

Yipping is the sound of a gerbil’s excitement. It shows that your gerbil is excited about whatever’s happening or is anticipating that something exciting will happen. So, for example, your gerbil might be excited that you opened the door to its cage.

Gerbils can also get excited when they meet other gerbils for the first time. Gerbils can have positive and negative reactions to new gerbils, but they may ‘yip’ out loud when they’re excited.

Foot thumping is a common noise. The gerbil will pound one or both of its hind feet against the floor of the cage. This will make a rhythmic noise that may be fast or slow. The thumps can be surprisingly loud for a creature of a gerbil’s size.

Because gerbils are social creatures, they may start thumping together. All the gerbils start pounding the floor, sometimes in rhythm and sometimes not.

What Does Foot Thumping Mean in Gerbils?

Unlike the other noises in this list, there are different reasons why gerbils thump their hind feet. The first is as a warning to other gerbils in a display of dominance. The loud, low thumping is scary to a smaller gerbil.

Another reason why a gerbil might thump its feet is that it’s interested in mating. The male will run around the enclosure thumping. This is a display of dominance, but for a different reason. It’s part of a bigger mating ritual.

According to the European Journal of Pharmacology, gerbils may also thump their feet to scare away threats and predators. It’s one of the scariest noises that a gerbil can make, much scarier than a squeak, for example. So, if your gerbil feels threatened, it might start stamping.

In the same way, your gerbil may also thump its feet when it hears loud noises. Your gerbil’s instincts kick in because it believes a loud noise might be a threat.

If you have a cat or dog, it may be frightened of your gerbil’s stomping. That may be surprising, but your other pet doesn’t know what’s making the noise. It could be something big and scary other than your gerbil.

What Does a Clicking Noise Mean in Gerbils?

Clicking isn’t a sign of your gerbil’s mood, unlike the other noises in this list. So, you won’t notice it when your gerbil is happy or excited. Instead, clicking is related to a breathing problem that needs urgent medical attention.

Because it’s associated with breathing, the clicking is rhythmic. It happens regularly as your gerbil breathes in and out. If your gerbil has a respiratory infection, you will notice other signs like:

All these signs together mean you can be certain of what the problem is. You should take your gerbil to the vet for antibiotics. These will help your gerbil overcome its ‘cold.’