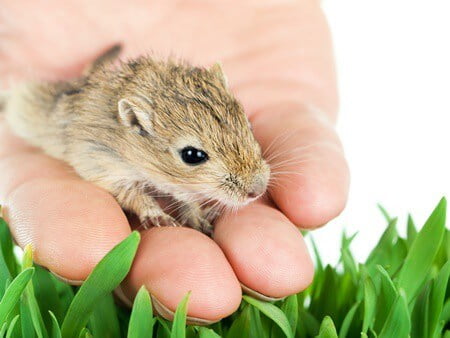 If you want to breed gerbils or prevent them from breeding, you have to know if they’re male or female. Checking for the differences between boy and girl gerbils is called sexing.

To determine the gender of a gerbil, hold it in your left hand and lift its tail. If its anus and urethra are far apart, it’s a male; if they’re close together, it’s a female. Females have more obvious nipples, and males have a more obvious lump at the base of their tails (scrotum). The male’s scent glands on its stomach are bigger.

Difference between Male and Female Gerbils

In gerbils, sexual dimorphism isn’t so obvious. Male and female gerbils don’t have different coats, for example. So, you have to look a little closer to tell the difference.

The main difference is in the gerbil’s sexual organs. Male gerbils have a penis and scrotum, while according to the journal Lab Animals, females have a vagina like other animals.

In addition, female gerbils have internal organs that assist in creating and developing pups (babies). These include ovaries, which produce eggs, and a womb where the pups are developed.

Males don’t have these organs. According to the Journal of Andrology, they instead have testes that produce sperm. The larger the testes, the more sperm they produce, hence why they are larger in adult gerbils.

These differences can’t be seen easily from the outside. Many of the differences are internal, so you wouldn’t see them unless you dissected your pet, which obviously isn’t an option.

Fully-grown gerbils are around four inches long on average. The tail adds around another four inches to the gerbil’s overall size. In many animals, you can tell the difference between a male and female from the size.

However, this isn’t the case with gerbils. Males are slightly bigger than females. If you have a cage with several males and females, you may notice this difference in comparison.

However, this difference isn’t big enough to consistently or definitively tell between males and females. A large gerbil is often a male but can be a female too. The same applies to small gerbils, which can be either male or female.

The reason for this difference is that males need to fight more than females. To be clear, female gerbils still fight. But males fight over mating rights, which directly affects which genes are passed to the next generation. Natural selection makes male gerbils bigger.

This friendliness is seen between the owner and the gerbil. Male gerbils are often less nippy with their owner and more comfortable being held. Male gerbils also make better ‘housemates’ than females do, with less fighting occurring in groups of male gerbils.

Again, this cannot be used to definitively sex a gerbil. A friendly gerbil isn’t necessarily male, and an unfriendly one isn’t necessarily a female. But the difference in the behavior of your pet can be a clue towards its sex.

One behavioral difference you might assume is if you see one gerbil mounting another. Presumably, the one doing the mounting would be the male. However, same-sex mounting is common in gerbils, in both males and females.

How to Tell a Baby Gerbil’s Gender

Take your gerbil and place it in your left hand (if you’re right-handed, left-handed is reversed).  Have it face away from you. Gently take the base of your gerbil’s tail between your thumb and forefinger and lift. In so doing, you can check for some of the signs of your gerbil’s sex.

Alternatively, place your gerbil in your left hand but on its back. This will allow you to look for certain other signs that you can only see from this angle. Below are each of the things to look for when you’re sexing to gerbils.

You could also hold the gerbil firmly around the waist and lift it. You can then look at its rear from below. This is essentially doing the same thing but in a different way.

When sexing a gerbil, pick the way that your gerbil is least nervous. This is likely to be in the palm of your hand. But if your gerbil doesn’t like being lifted by its tail, even a little, then use the method where you hold it around its waist.

When is It Best to Sex Gerbils?

The best time to sex gerbils is soon after they’re born. A week or so is the optimal time at which to check. Between their first and second week is fine. Any point after this, and sexing your gerbil becomes more difficult.

That’s because it’s easier to tell your gerbil’s sex when they don’t have fur. During this second week of life, your gerbil’s coat will be filling out. But you can look through the wispy developing hairs to see what you need to see.

However, there are other signs to look for that are more obvious in adult gerbils. One of these is the scrotum, which is fully developed in adults but not in juveniles. This means that you can sex your gerbils at any age.

Check Your Gerbil’s Anus and Urethra

The first thing to check for is the distance between your gerbil’s anus and urethra. The anus is where your gerbil will poo from, and their urethra is where they will wee from.

Both males and females will have a urethra and anus. According to the Journal of Anatomy, the structure of the pelvis and urethra are the same in gerbils as they are in other rodents.

The issue is that this area will be covered with fur in adult gerbils. In baby gerbils, it won’t be. The difference is smaller in female and male gerbils when they’re juveniles because they’re smaller.

The best way, then, to check for this difference is comparatively. If your gerbil had a litter of five or six, compare them one to the other. However, there are other ways to check the sex of a gerbil that are even easier.

Check for Your Gerbil’s Scrotum

The scrotum contains the testes, which only a male has. In some animals, it is attached closer to the body than in others. In gerbils, it is quite closely attached.

The scrotum will appear as a small lump just under the base of the gerbil’s tail. This is absent in female gerbils, so it is one of the main differences to look for.

This is most obvious on juveniles with their shorter fur, but the scrotum is larger in adult males, so you can still sex an adult gerbil this way too. This small bulge won’t appear until around six weeks into your gerbil’s life.

Do Male Gerbils Have Nipples?

Nipples are difficult to see on gerbils when they’re covered in fur. But when you’re sexing a baby gerbil, they’re easy to see. A female will have eight nipples, four on each side in a row between the front and rear legs.

The easiest to see is the frontmost two. These are situated between the two front legs, in a location similar to those of a person. Males don’t have any nipples at all, so the presence of two small, slightly darker dots here is a sure sign of a female.

This is one of the easiest ways to sex a juvenile gerbil. The difference is obvious. It’s also easy to both see and feel these nipples on a gerbil and is non-invasive. However, with adult gerbils, this is next to impossible because of their fur.

Sexing Gerbils by Looking at Their Scent Gland

Gerbils also have a scent gland on their underside. This gland is on the gerbil’s stomach, where you might imagine their belly button would be. In juveniles, it is underdeveloped, so it is less obvious. In adults, it is a shade darker than the rest of the skin, is hairless, and is an oval shape.

The gerbil’s scent gland is slightly larger in males than it is in females. This is difficult to spot unless you can directly compare two gerbils together.

This method is best used with adult specimens. In juveniles, the scent glands aren’t easy to spot at all. So, if you’re identifying the sex of a juvenile gerbil, use another of the methods in our list.

Tips on Sexing a Gerbil

The easiest gerbils to sex are a week old to two weeks old. That’s because there are many signs which are obvious at a young age, like nipples. It’s also easier because the gerbil can’t walk, so you can keep it in place without it struggling to get away from you.

Sexing a gerbil isn’t easy because it may try to get away from you. It may not want to be placed on its back, for example, and you shouldn’t dangle it by its tail because this can damage it or cause the tail to fall off.

If your gerbil isn’t comfortable, there’s an easy trick. Place it inside a clear plastic tub with some air holes. You could put the tub in your gerbil’s enclosure with some food inside to lure it in. Then, you can hold the tub over your head to see your gerbil’s underside.

When you do this, don’t flip the tub upside down with the gerbil inside. Keep your gerbil comfortable by moving the tub slowly.

Aside from this, do everything you do gently but firmly. Don’t tug your gerbil’s tail when sexing it or dangle it by its tail. This can cause severe spinal trauma and tail slip.