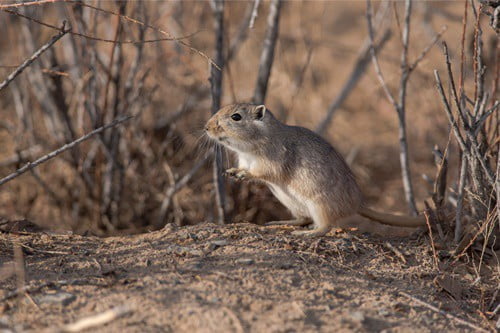 Gerbils need to defend themselves. They live in a dry, desert environment with several predator species around. But it’s difficult to imagine such a small animal protecting itself from such threats.

Hiding in burrows is a gerbil’s most effective self-defense strategy. Gerbils stomp their feet to warn each other of nearby predators so that they can escape in time. They can also fight back against predators with their sharp incisors. As a last resort, they can play dead to discourage predators.

You can observe these behaviors in captivity. If a captive gerbil sees someone it doesn’t know, or you move too fast, it may start stomping. If it’s sufficiently afraid, it will run to hide in its burrow.

Table of Contents hide
1 How Do Gerbils Survive in The Desert?
1.1 Are Gerbils Predators or Prey?
2 Gerbil Natural Predators
3 How Do Gerbils Defend Against Predators?
3.1 Digging Burrows
3.2 Foot Stomping
4 How Do Gerbils Fight?
4.1 Wrestling and Boxing
4.2 With Their Teeth
4.3 Do Gerbils Play Dead?
4.4 Related Articles:

How Do Gerbils Survive in The Desert?

The most common pet is the Mongolian gerbil. True to its name, this species lives in Mongolia. Much of it is covered by a steppe. This is a desert, but with grassland plains.

In southern Mongolia, you’ll find the Gobi Desert, which extends to China. The gerbil can be found in both of these habitats. Living in such inhospitable places is difficult.

This has meant that gerbils have had to adapt to the desert. This has led them to develop defense mechanisms and ways of living that protect them.

Gerbils adapt to the desert by conserving water. There aren’t many lakes and rivers where gerbils live, so they get most of their water from what they eat. They infrequently urinate to preserve water.

Are Gerbils Predators or Prey?

In the Mongolian steppe, there are hardly any animals. There’s precious little plant life, which is what supports prey animals like gerbils. If there are lots of plants, there are many gerbils and lots of predators to prey on them.

But because of the lack of plant food, there can’t be many prey animals there. This severely limits the number of predators, both in kind and in numbers. But there are some, which means that gerbils need defense mechanisms they can rely on.

Gerbils are predators in the wild, too. They supplement their diets with insects. They are a good source of protein in a part of the world where there isn’t much to be found.

Gerbils have several natural predators. According to the IUCN, one is Pallas’s cat, a kind of wild cat found in Mongolia. It lives in all the same places that gerbils do, perhaps even in some parts of the Gobi Desert. It’s an ambush hunter that looks like a big, fluffy house cat.

There are snakes in the Mongolian steppe, too. Venomous species include the Halys pit viper and the common northern viper. These species will bite their prey and inject them with paralyzing even deadly venom.

There are also non-venomous species, including the Tatary sand boa, the slender racer, the steppe rat snake, and Pallas’s Coluber (the same scientist discovered this snake and the cat described above). These snakes wrap around their prey with coils and squeeze them to death.

Both venomous and non-venomous species will eat small rodents like gerbils. Rodents are the most common food of snakes worldwide. Besides, there isn’t much else for them to eat.

In addition to snakes, there are birds of prey. There are hawks, eagles, kites, and harriers. There are even vultures. Each of these birds will prey on small rodents.

This means that gerbils are attacked both from the ground and from the sky. They have to defend themselves from varied threats that could strike at any moment.

How Do Gerbils Defend Against Predators?

So, a gerbil’s main defense mechanism is to run and hide. Gerbils use their speed to their advantage and will run to hide in a burrow as quickly as possible when a predator is around. They don’t hang around waiting to get into a physical fight.

This surprisingly effective tactic means that gerbils can avoid most predators. A predator may not see or smell where the gerbil went because the entrance to the burrow is small. They may not have even seen the gerbils at all, as the gerbils may have seen it first.

The process begins with the gerbil digging its burrow. All gerbils live in burrows, both in the wild and in captivity. These burrows have many entrances/exits, often between ten and twenty. The group will spend much of its time inside the burrow, particularly when sleeping.

A group of gerbils will also have extra burrows nearby. These burrows are useful for when the group is out foraging food. They ensure that no gerbil is ever too far away from somewhere it can hide.

These burrows go feet beneath the ground. The burrow structure is as follows: there are many different large chambers, each connected to the other by a tunnel. Some of these tunnels head to the surface as an entrance or exit.

Gerbils dig these burrows with their forepaws. Their paws are small, but working together, a gerbil group can dig a large burrow in a small amount of time. However, most gerbils don’t ever need to dig because they live in burrows made by their parents.

Either way, these burrows allow gerbils to avoid predators. When one comes close, the gerbil can immediately dash into its nearest tunnel. Most predators are too big to follow. The gerbil is quick enough to escape through the tunnel system and get away from those that can follow it.

Gerbils spend lots of time on their hind legs, which aids them in spotting predators from a distance. When a gerbil sees a threat, it begins drumming its hind feet. This works in conjunction with the burrow system as a gerbil’s best defense.

You can see this same behavior in captivity. Your gerbil stands on its hind feet, with its body and head still. It will drum its feet very quickly, one after the other, with breaks in between. This is a warning signal. Other nearby gerbils will join in, and all will be on high alert.

If the threat comes any closer, all the gerbils in the group will head for their burrow. Gerbils make their own burrows by digging. These burrows are deep enough and wide enough that they can accommodate the entire family.

The gerbils will stay inside their burrows until the danger has passed. If it’s an intelligent animal, like a snake, it may sneak into the burrow to attack. But gerbils don’t have many other options.

Burrows are easy to defend. A gerbil can sit near the tunnel entrance and bite out at any predators trying to get in. This defensible position is preferable to being out in the open. In the open, a bird of prey could strike at any time.

How Do Gerbils Fight?

All gerbils will run and hide if they see a predator. But when you’re running from a bird of prey, you have to be exceptionally fast. Birds of prey and wild cats strike quickly, leaving the gerbil with time to run away.

So, gerbils aren’t entirely defenseless. While they aren’t big and strong, they can fight back against a predator if they have to. They can also protect themselves against other gerbils from other clans when necessary.

According to Current Zoology, gerbils fight by wrestling with each other. They do this by trying to pin each other to the ground.

Both gerbils will stand, sometimes on their hind legs, facing each other. Each may squeak loudly to try and frighten the other into standing down. If one doesn’t, a wrestling match will ensue. The gerbils will push each other and hit out with their front paws.

Eventually, one will pin the other to the ground. The gerbil on top is the winner. This method of fighting was developed because neither gerbil will be significantly harmed. It’s used within clans.

If a gerbil invades another gerbil’s territory, it won’t get such nice treatment. Instead, the gerbil group will fight it off and may even use their teeth. They can be used in a wrestling bout, like above. Or, the gerbil may attack the intruder by chasing it and biting its tail.

Gerbils’ teeth are hard and long. They aren’t sharp and pointed like canines. They’re sharp, but their tops are flat. These are the incisors, the same as those you have at the front of your mouth. The difference is that a gerbil’s teeth grow continuously and are ground down to be sharp and deadly.

Gerbils can also use their teeth against predators. If your pet has ever bitten you, you know that it can hurt. A gerbil that’s scared for its life will bite even harder. While this won’t be effective against most predators, it’s a better defense than no defense at all.

Playing dead, also known as playing possum, is where a prey animal goes still and/or limp to get a predator to leave it alone. In scientific journals, the behavior is known as tonic immobility, thanatosis, or apparent death.

This is a defensive behavior of last resort. If a gerbil tried to escape but was caught and tried to fight back but couldn’t hurt its predator, it may try playing dead. According to Biological Psychiatry, gerbils may sometimes do so.

The gerbil’s method of playing dead isn’t complex like you might see in other animals. It will sit as still as possible in the hopes that the predator will leave it alone. The predator may do so if it thinks the prey has been dead a long time.

It does this because dead prey could be infested with parasites or flies and full of bacteria. Predators prefer catching live prey to avoid this problem. Some species produce foul smells to pretend they’ve been dead a long time, although gerbils don’t.

This is seen in lots of rodents. If one of your pets has ever caught a rodent, you may notice your pet toying with it. The rodent sits there and doesn’t move, even if it has a chance to get away. This is a form of playing dead, and gerbils can do it too.