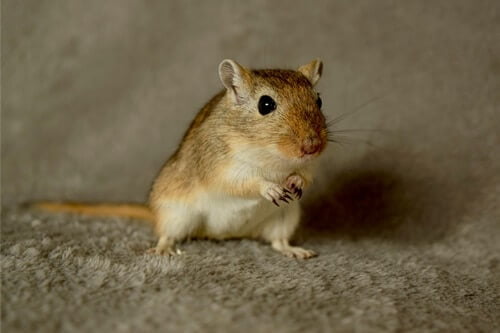 Foot stomping (also known as drumming) is when your pet pounds its back feet in quick succession. Gerbil foot-stomping sounds like a tiny drum, and it can be surprisingly loud for a small animal.

Drumming happens when a gerbil is excited or stressed. Gerbils stomp when you scare them, or they see a threat, such as somebody new. Both male and female gerbils will drum their feet when they want to mate.

Gerbil stomping is more common in juveniles than adults. That’s because a juvenile gerbil has more to be afraid of than an adult gerbil. You’ll have to observe your gerbil’s other behaviors to understand precisely why they’re stamping their feet.

What Is Foot-Stomping in Gerbils?

It’s called ‘drumming’ because it sounds like a drummer bashing out a beat. It’s also compared to tap dancing because of what it looks and sounds like.

Your gerbil may pound its feet faster or slower than usual. It may also be louder or quieter than usual. This can depend on the reason for your gerbil’s drumming.

What Does It Mean When a Gerbil Stomps Its Feet?

If you observe your gerbils, you may see them occasionally stomping their feet. According to the Journal of the Acoustical Society of America, this behavior is common to less common species, like the great gerbil, too.

Considering the size of a gerbil, the sound one can make by stomping is surprisingly noisy. Gerbils don’t stomp for no reason. They stomp as a means to communicate with each other. But stomping, like squeaks and other noises, has lots of different meanings.

What many owners don’t realize is that gerbils are surprisingly smart. In the wild, they live in large groups of up to seventeen gerbils. Each individual has to communicate with others:

Communicating these things gives a gerbil clan a clear evolutionary advantage. So, for example, drumming to warn of nearby predators can help other nearby gerbils to escape. They will then survive and create the next generation of gerbils.

These behaviors all stem from the wild. But gerbils haven’t been domesticated for thousands of years. They were only kept as pets for the first time in the middle of the twentieth century. They haven’t yet ‘forgotten’ or ‘unlearned’ the behaviors that served them in the wild.

Do Gerbils Stomp When Frightened?

A frightened gerbil will stand on its hind feet and stomp the feet. Other gerbils will come out to see what’s going on and may stomp their feet too.

In the wild, there’s only one thing that might frighten a gerbil. Something like a bird of prey, for example, would be worth warning other gerbils about.

In captivity, there aren’t any predators. You might think that there’s no need for your pet to drum its feet. But even so, there are several reasons why a gerbil might be frightened:

When frightened in one of these ways, your gerbil may stomp its back feet. You may also notice your gerbil having seizures in scenarios like these. Seizures occur when a gerbil is frightened, too.

Why Do Gerbils Stomp When They’re Frightened?

Stomping serves as a warning. Other gerbils will hear or feel the drumming and will recognize it for what it is. They will then go off to hide somewhere.

This behavior has a clear evolutionary advantage. Gerbils that stomped could keep their families safe from predators, while others didn’t. The ones that did drum would survive and continue breeding, while the others wouldn’t.

Do Gerbils Stomp When They Want to Mate?

The mating stomp is subtly different from the warning stomp. Your other gerbils will know the difference, so they won’t react as if there’s something to be frightened of. To your ears, though, both kinds of stomping sound the same. It can be difficult to figure out why your gerbil is drumming.

You will notice this when one of your females is in heat. When a female is in heat, the male or males nearby will want to mate with her. Female gerbils are in heat regularly, around once every four or five days.

You will also notice this behavior when you have a male and female pair in a split cage. If they start drumming frequently, this may be a sign they want to mate. You could consider removing the cage divider because they’ve bonded. Both the male and female will stamp before mating.

Why Do Gerbils Stomp When They Want to Mate?

Gerbils can’t talk but love to communicate. They squeak, they drum, and they use body language too. Stomping is one of many ways that a gerbil will communicate that it’s ready for mating.

So, gerbils that stomp to show that they’re ready to mate will find more mates. Stomping is a good way of getting attention. Gerbils are hard-wired to respond to stomping with excitement.

Gerbils Stomping for No Reason

It is also possible for gerbils to stomp randomly. Often, one gerbil will get spooked by something that you overlook. It could be something like a shadow, a reflected light, or a quiet noise. It will then start stomping for what seems like no reason.

Furthermore, gerbils will join in stomping when one gerbil stomps. One might start stomping for any reason, and the rest in the cage will join in. Then, because these gerbils are drumming, those in another cage on the other side of the room will join in.

Why is Your Gerbil is Stomping?

The mating stomp is different. It’s more rapid and may not have regular gaps, and is usually quieter. You can also determine why your pet is drumming based on other behaviors. A gerbil that is frightened will do these things as well as stomping:

Also, when your gerbil stomps because it’s frightened, other gerbils will poke their heads out to see what’s happening.

If your gerbil is drumming because it wants to mate, the female will act in a certain way. She will run up towards the male before running away again quickly. She will then lift her rear towards him.

How to Stop Gerbils Drumming

If you want to stop your gerbil stomping back feet, it’s possible, but only to an extent. The owner’s behavior often triggers gerbil drumming.

As a gerbil’s owner, it’s easy to forget that your pet can be frightened by you. While it may enjoy spending time with you, even cuddling, you are still much bigger and can move quickly.

The best way to prevent drumming is by becoming aware of your behavior. So, for example:

Doing these things will stop your gerbils from drumming as much. However, they still will do so to an extent. That’s because your gerbils can be afraid of things other than you. And aside from that, your gerbils will still want to mate.

Even though you can’t stop your gerbils from drumming completely, that’s nothing to worry about. Your gerbils aren’t upset or unhappy solely because they drum frequently. It’s natural behavior, and your gerbils can still be happy and relaxed at other times.