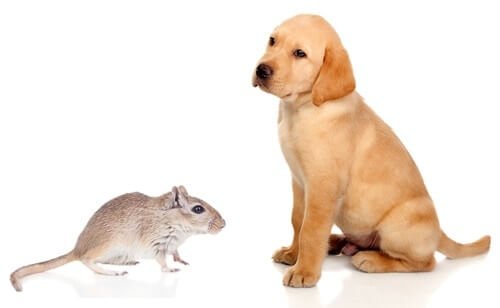 Many people who own pets have more than one, e.g. gerbils and dogs. The interaction between the two animal species depends on their natural instincts. So, for example, it’s unwise to keep a rodent with any pet that would survive in the wild by eating it.

Dogs and gerbils can learn to live together, but are usually afraid of each other to some extent. Dogs aren’t likely to attack gerbils, because in the wild, dogs and wolves hunt bigger prey. But some breeds of dog attack rodents, such as schnauzers and terriers. Don’t leave these two pets loose together.

For complete safety, keep your gerbil shut or locked in a room that the dog can’t access. Then, there will never be an occasion where the dog could attack your gerbil.

There is a wild dog that lives in Asia, called the dhole, or the Asian wild dog. It doesn’t live in the gerbil’s range anymore, but it used to do so. According to the IUCN, their population is decreasing.

However, these wild dogs hunt larger animals in packs. They don’t hunt gerbils. So, gerbils don’t view dogs as a potential predator.

According to Current Zoology, gerbils are social animals. They enjoy spending time with people once they get to know them. You have to gain your pet’s trust first, but they can be handled and even cuddled. Once a gerbil is friendly like that, it won’t get scared of you anymore.

The same can apply to other pets. This means that gerbils and dogs can like each other. But it’s less likely that the gerbil will trust the other pet, as much as it will a person. That’s because the gerbil and dog can’t properly interact, e.g. through handling or sharing food.

The same also applies the other way around. At first, a dog might be scared of a gerbil. But over time, it might come to realize that the gerbil isn’t dangerous, even if it can make loud noises.  But being friendly doesn’t necessarily mean that gerbils can’t live with dogs.

Are Gerbils OK with Dogs?

Gerbils and dogs can be friendly with each other, but things can quickly turn sour. So, it’s up to you, the owner, to keep both pets happy.

A dog’s instincts aren’t as strong as those of other pets. They have been domesticated for long enough that much of a dog’s natural behavior has changed. But a dog could still attack a gerbil if its instincts took over.

This is especially the case for hunting dogs. In the past, certain breeds were created to hunt small birds and rodents, or foxes. These dogs have an in-built hunting instinct, some specifically for rodents. These dogs are dangerous around gerbils. Examples include:

Smaller dog breeds are likely to be adept at hunting rats and rodents. So, these dogs can’t live with gerbils. But other breeds can, especially if they’re well-trained.

Training is vital if you want your gerbil and dog to live together. The more likely your dog is to obey, the less likely it will attack your gerbil. Your dog will understand that you like the gerbil, so they won’t try to hunt it.

Can Gerbils and Dogs Play Together?

While you should introduce them, you shouldn’t have the pair play together. During play, a dog’s instincts kick in. That’s why dogs enjoy fetching balls or sticks for you: they’re playing at hunting.

If you ever notice your dog shake its head after it catches a ball, that’s instinct. This is what it does in the wild when hunting. It breaks the prey’s neck, by flinging it around.

Are Gerbils Scared of Dogs?

A gerbil’s first reaction to most new things is fear. Gerbils are naturally afraid of things they don’t know because it helps them survive in the wild. If they were curious when they encountered something new, then they could get eaten or hurt.

So, your gerbil’s reaction to seeing a dog will likely be to hide. All gerbils have a burrow, and this is one of its purposes. It allows the gerbil to escape a dangerous situation quickly. It scatters as promptly as it can to reach a place the predator can’t.

If it doesn’t hide, it will foot thump. Foot thumping is where the gerbil bangs its hind feet rhythmically against the ground. This serves as a warning for nearby gerbils that something dangerous is nearby.

Are All Gerbils Afraid of Dogs?

However, not all gerbils react in the same way. Your gerbil may be entirely unfazed by seeing a dog for the first time.

Unbeknownst to you, it may not be the first time your gerbil has seen a dog. Before you bought it, if it lived in a pet shop, it may have seen many dogs. This would make it less afraid.

Also, all gerbils have unique personalities. Some are more playful, while others are shyer. Others bite more frequently. Your gerbil may have a fearless disposition, which means it isn’t afraid of dogs.

Are Dogs Afraid of Gerbils?

The answer depends on the size of the dog and the behavior of the gerbil.

The smaller the dog, the more likely it will be afraid of things, like loud noises. This doesn’t hold true for every dog or every breed, but it’s generally so. So, if your dog is a small breed like a chihuahua, then it may be more afraid of a gerbil than a larger breed of dog.

A gerbil’s foot thumping can also be surprisingly loud. Your dog won’t know where the noise is coming from, or what’s making it. It may be quite afraid indeed until it finds out. It’s not unusual for a dog to be too afraid to come into a room if it hears foot thumping.

A dog could react badly to seeing a gerbil run around in its pen. Gerbils move quickly, and dogs can be afraid of things that move quickly, which they haven’t encountered before.

Not all dogs react the same to gerbils. Some could attack while others wouldn’t. Several factors affect your dog’s reaction, including:

There is no way of knowing for sure how your dog will react to your gerbil. So, it’s best to be on the safe side and not have them both loose together.

But what makes dogs especially dangerous to gerbils is if they’re hunting dogs. Historically, certain dog breeds were created to hunt.

According to the AKC, they’re loving and inquisitive. But rat terriers were bred to be small and quick enough to catch rats. They would almost certainly want to attack a gerbil, too.

Are Gerbils Harmful to Dogs?

Some dogs are friendly and cuddly. You may have had or known one that wouldn’t hurt a fly. These dogs aren’t likely to attack your gerbil, but it’s possible that your gerbil could attack the dog.

This frequently happens with small pets and larger, more passive pets. The smaller pet, which is much weaker and more vulnerable, can boss the other one around. If you’ve ever kept cats and dogs together, you may have seen this happen.

The same can happen with a gerbil. If the gerbil and dog were loose in the same room, the dog might be afraid of the gerbil. But even then, it’s unlikely that a gerbil would bite a dog unless provoked. And either way, you shouldn’t allow your dog and gerbil free at the same time.

How to Introduce a Gerbil to a Dog

Your gerbil and dog shouldn’t be friends. There’s no need to make them cuddle up and love each other. But what you do need is to make each comfortable with the other. So, when you bring your dog or gerbil home for the first time, you have to introduce it to your other pet.

This doesn’t involve letting them loose at the same time. Dogs can be unpredictable, because even well-trained dogs still have instincts. Rather, you need to maintain a safe distance between the two, while allowing them to know each other.

There are two ways to achieve this. You can either leave the gerbil in its cage, or put it in an exercise ball. Leaving it in its cage is the better choice. Other guidelines you should adhere to include:

Leave the Gerbil in Its Cage

Leave the cage in its usual place in the room. Ideally, it should be at around head height for the dog so that it can see and sniff your gerbil.

Bring the dog into the room on its leash. Allow it to approach your gerbil’s cage, and gauge the reaction of both of the pets. It’s likely that the gerbil will foot thump, and that the dog will be slightly nervous. Allow the dog to do what it wants: approach the cage carefully, or move away.

Of course, if your dog approaches the cage as if to attack the gerbil, stop it from doing so. But this will allow the two to meet safely for the first time. Repeat the process until both are more comfortable. You can then allow the dog into the room without a leash, provided the cage is shut. This method has several benefits:

But this isn’t the only way of introducing the pair.

Leave the Gerbil in Its Exercise Ball

If your gerbil has an exercise ball, it could come in handy here. This is a method endorsed by several online blogs, but it can easily go wrong.

You could put the gerbil in its ball before introducing the gerbil and the dog. This would have the added benefit of letting the gerbil move around, and perhaps get to know the dog better. The pair could interact more than if the gerbil were cooped up.

The method works much like the previous one. Allow the dog into the room, but only on its leash. This ensures that it can’t attack the gerbil, even if it’s safely in its ball.

Better still, the ball will have small holes in it through which smells can pass. So, the dog can smell the gerbil, and the gerbil can smell the dog. But this method also has several downsides which you must consider before trying it:

It’s best if you stick to the other method of introducing dogs and gerbils. But even then, you shouldn’t have the two spend lots of time in each other’s company. Keep your gerbil in a room the dog can’t access to ensure they live safely together.