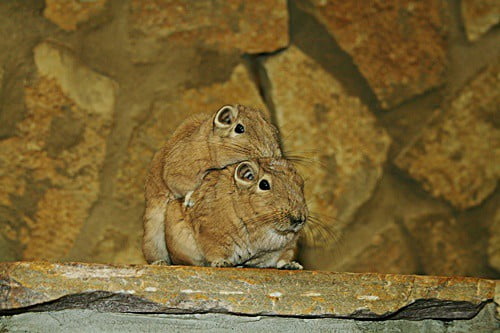 Mounting is a common gerbil behavior. However, you may be surprised or confused when you see same-sex mounting in gerbils and wonder whether this is common.

Female gerbils mount other females to show which one is dominant and submissive. This can be a regular behavior, but it is most common after you clean their cage. They may mount each other when in heat, but this occurs less frequently when a male gerbil is present.

It’s possible that you misgendered one of your gerbils as female when it’s male. If that’s the case, the pair are mating and could produce a litter. Separate them without delay unless you want baby gerbils.

Why Do Female Gerbils Hump Each Other?

Gerbils live in pairs. According to the Journal of Mammalogy, these pairs may be either same-sex or opposite sex. It’s in these same-sex groupings that you will observe this behavior.

Same-sex mounting can certainly be seen in gerbils, both male and female. It occurs in individual pairs and large groups. The main reason why female gerbils hump each other is to enforce the gerbils’ social structure.

But that’s not the only reason. Cases of homosexual animals are far from rare. In most cases, the animal will mate with both females and males of its own kind. What is rare is an animal that exclusively chooses to mate with the same sex.

What may be happening is that both the females are in heat at the same time. One will lift its rear at the other, which signifies that a female wants to mate. The other may sniff its behind and try to mount it.

This doesn’t mean that neither female would mate with a male. If you introduced each of them to males, they would likely want to mate as normal. This isn’t behavior to be concerned about.

Gerbil mounting isn’t necessarily due to the desire to mate. Gerbils may mount each other as a signal that one is dominant and the other subordinate. It’s like a social cue that reinforces the position of both gerbils in the group.

There are no gerbils that do not understand this kind of social interaction. According to Current Zoology, all gerbils are social creatures and form groups without being prompted. This can be seen both in the wild and in captivity.

Periodically, one of the dominant gerbils may mount the others in the group. The pair aren’t mating. If you see this frequently, it can be a sign that declanning will occur soon.

In the context of a group, many of the gerbils may take turns mounting one other in particular.

You may notice that this happens particularly after you clean your pets’ cage. Let’s say that you took your gerbils and put them in a pen. You then took all the old bedding from their cage, cleaned the glass with antiseptic, dried it, and put your gerbils back with fresh bedding.

This can spur your gerbils to fight more than they did before. That’s because their scents are gone. You washed them away with the antiseptic fluid and by getting rid of all the old bedding.

According to Behavioral and Neural Biology, scent is essential to gerbils. Their hierarchy is determined and reinforced through smell. Gerbils have small scent glands on their bellies, which they use to mark territory.

When you get rid of all the scent from the cage, it’s like you put the gerbils somewhere new. Previously, the subordinate gerbil accepted that it was the dominant gerbil’s territory, but now it doesn’t. The cage doesn’t smell like the dominant gerbil anymore.

This leads to the pair fighting over the ‘new’ cage. You may notice the pair mounting each other. They are trying to establish again which one of them is the dominant one.

Wrestling is where the two gerbils face each other down. Then, one attacks the other and tries to push it over. The other one fights back, trying to push the attacker over instead. The point is to prove which one of the gerbils is strongest.

During these fights, there will be lots of movement followed by periods of stillness. One gerbil may be on top of the other, partially or entirely. It’s possible to confuse this behavior with mating unless you look closely.

Perhaps you accidentally put a male in with a female. The two are mounting because they’re mating.

If you pay close attention, you can tell the difference between male and female gerbils. But if you already think you know, you may ignore the signs.

This is an easy mistake to make if you aren’t familiar with gerbils. The signs of female and male gerbils include:

Checking whether a gerbil is male or female is sexing. The process itself is easy. Take your gerbil in your left hand (if you’re right-handed). Then gently raise your pet’s tail with your thumb and forefinger. Support your gerbil’s body so that doing this doesn’t hurt your pet.

Look for the scrotum and check the distance between your gerbil’s anus and urethra. This is the easiest way to sex an adult gerbil. Alternatively, take your pet to a vet or a breeder.

If one is a male and one is a female, you should separate the pair. Otherwise, they will create a litter that you will then have to care for.

What to Do If Your Female Gerbils Mount Each Other

This isn’t usually a problem, so you don’t necessarily have to do anything. If the pair seem to get along, and you’re sure that neither is male, then you can leave them be. However, there are instances where you should separate the pair. If one is a male, separate them unless you want a litter.

You should also separate the gerbils if the mounting leads to fights. In most instances, the mounted gerbil will accept that it’s subordinate. It may roll onto its side, too, to further display that it’s submissive.

However, the one being mounted may not want to be subordinate. If it doesn’t, it will throw the other gerbil off. It will then stand on its hind legs, turn its head around, and look the other gerbil in the eye. If the other gerbil still tries to mount it, a fight may ensue. You may notice:

The only way to stop these fights is to split the pair apart. In the wild, they would go their separate ways and start their own burrows. But in a cage, neither gerbil can do that.

Each gerbil should live with a same-sex sibling because gerbils don’t like to live alone. If not possible, you can get more gerbils from the store. Gerbils who live alone become unhappy and depressed.