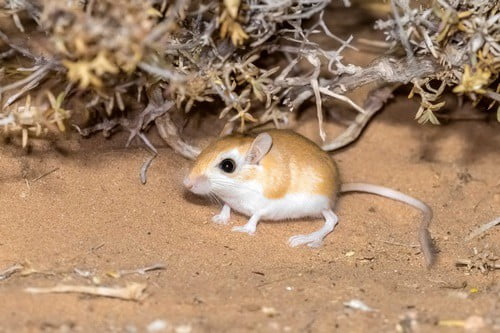 There are many different species of gerbils. They all vary in size, depending on their species and sex. The kinds of gerbils found in pet stores are medium-sized.

Mongolian gerbils, or domesticated gerbils, can reach up to 5.3 inches in length (excluding the tail). Healthy adult gerbils can weigh up to 135 grams. Females are usually smaller than males. The largest species of gerbil is the Great Gerbil, whose body can reach 8 inches long.

We’ll explore the average gerbil size range and how big you can expect your gerbil to get. We’ll also look at gerbil cage size requirements and what to do if your gerbil is getting too big.

What Is the Average Size of a Gerbil?

There are over 100 different species of gerbils living in the wilds of Asia and Africa. They can range from under 2 inches to over 8 inches in length, excluding their tails.

The most popular type of gerbil kept as a pet are Mongolian gerbils. They’re medium in size.

When they’re born, Mongolian gerbils weigh less than 3 grams. But they grow quickly within their first few months of life.

The average size of an adult Mongolian gerbil is 4 inches long, not including the tail. Gerbils’ tails are usually as long as their bodies, so around 4 inches again.

Mongolian gerbils weigh around 90g on average (approximately 3.2 ounces). That’s about the same weight as a small apple.

The other pet gerbil is the fat-tailed gerbil (Duprasi gerbil.) Fat-tailed gerbils have similar body sizes to Mongolian gerbils, but their tails are shorter, at 2 inches. They also weigh less, around 40g.

No matter the species, male gerbils are usually bigger than female gerbils. They start off the same size but grow larger as they go through sexual maturity.

What’s the Biggest Gerbil Ever?

There’s currently no world record for the biggest Mongolian gerbil. But the award for the largest gerbil species in the world goes to the great gerbil (Rhombomys Optimus).

The appropriately named great gerbil can reach an extraordinary size (for a gerbil, that is). Its body can range from 6 to 8 inches in length. That’s about the same length as a guinea pig.

Great gerbils also have a long tail, which is around the same length as their body. They have long, sharp front claws that they use for digging tunnels.

Great gerbils are found in several Asian countries, including Pakistan, China, Iran, and Mongolia. They live in desert habitats, just like Mongolian gerbils, and they live in communal burrows.

Because they have never been domesticated, great gerbils cannot be kept as pets. They wouldn’t thrive in captivity, and it would be difficult to provide adequate care for them.

According to BBC News, great gerbils may have caused the Black Death of the European middle ages. They are carriers of the Yersinia pestis bacterium, which is responsible for the bubonic plague.

What’s the Smallest Type of Gerbil?

Most gerbils are on the small side. Being small helps them to keep out of sight and avoid predators. There are many tiny species of gerbils, such as the pygmy gerbil and the Somali pygmy gerbil.

But the smallest type of gerbil that we know of is the pouched gerbil, found in western Africa. Even as adults, pouched gerbils rarely exceed 14g in weight or 3 inches in length.

The smallest gerbil you can keep as a pet is the fat-tailed gerbil (or Duprasi gerbil). Fat-tailed gerbils aren’t much shorter than Mongolian gerbils, but they’re a lot lighter at only 40g.

The smallest rodent in the world is not a gerbil — it’s the Baluchistan pygmy jerboa. Jerboas are related to gerbils but have larger back feet for hopping. Pygmy jerboas weigh 3-4 grams as adults.

How Big Do Mongolian Gerbils Get?

Many people are surprised by how big Mongolian gerbils can get. They may look small in the pet store, but that’s because they are still babies.

Usually, gerbils are sent to pet stores as soon as they have been weaned and left their mothers. They are ready to be sold when they are only around 6-8 weeks old and 2-3 inches long.

Your gerbil may continue growing for several weeks or even months after you bring it home.

Not all gerbils are the same size. Some gerbils stay much smaller than others, even as adults. Their size can be affected by:

The final adult size of your gerbil will depend upon a combination of the above factors.

How Big Do Male Gerbils Get?

Male gerbils have the potential to grow bigger than females. They can reach between 80 and 135 grams when fully grown.

This is an example of sexual dimorphism: differences in males and females of the same species.

In gerbils, the size difference is to do with the contrasting roles of males and females. Male gerbils are the leaders of the clan, so they have to compete for power and territory.

The largest male is usually the most dominant gerbil. That’s because he will almost always win in a fight. He’ll get the first pick of where to live and sleep, what to eat, and who to mate with.

Because of this, the largest males more easily pass their genes on to the next generation. That’s how natural selection makes male gerbils bigger than females.

Male gerbils also tend to be lazier than females. It isn’t always the case, but lazy male gerbils are more prone to obesity.

How Big Do Female Gerbils Get?

In general, female gerbils are smaller than males. Female gerbils can reach between 70 and 110 grams as adults. Each gerbil’s weight within this range depends mostly on genetics and diet.

Unlike male gerbils, females have no reason to grow unusually large. Female gerbils are almost always subordinate to males, regardless of size. They don’t need to fight for territory or dominance.

Instead, a female gerbil’s job is to rear young. Size doesn’t affect the ability to take care of young, so it isn’t a factor.

Female gerbils get larger when they’re pregnant. You can expect a female gerbil to gain a few grams per day throughout pregnancy.

Their abdomen will engorge to accommodate their growing litter as the pregnancy progresses. They will also store fat in other areas to help with milk production.

What Are the Gerbil Cage Size Requirements?

Gerbils are born less than an inch long. They can leave their mother from as early as five or six weeks old. If you’ve got your gerbil from a pet store or breeder, it is probably still a baby and quite small.

You may be tempted to purchase a small cage, such as a hamster cage, for your gerbil. But this would be a mistake, as your gerbil will quickly outgrow it.

Hamster cages are never suitable for gerbils. Gerbils require a large tank to hold substrate for digging tunnels, with a cage on top. The cage must be big enough to hold the exercise wheel, water bottle, hide, and food dish.

Many store-bought gerbilariums aren’t big enough for adult gerbils. Your gerbil may fit while it’s still young, but it will soon run out of the room. This is especially true if you house more than one gerbil in the same cage.

How Big Should a Gerbil Cage Be?

Even if you’re buying a baby gerbil, it’s better to get a large gerbilarium that it will grow into. It’s more economical than purchasing a smaller cage and having to replace it within a few months.

Each gerbil requires at least 10 gallons of space. There is no difference in space requirements for male and female gerbils. Their size disparity isn’t significant enough to require different-sized enclosures.

You must keep at least two gerbils together so they don’t get lonely. So the minimum gerbil cage size is 20 gallons for a pair of gerbils.

There should be at least 15 x 30 inches of floor space for a pair of gerbils. But floor space isn’t as valuable as vertical space. The gerbilarium should be deep enough to hold at least 6-7 inches of substrate.

When Do Gerbils Stop Growing?

By adulthood, they are fully grown. But the definition of ‘adulthood’ can depend on who you ask. There is no precise moment when every gerbil stops growing.

According to Reproduction, Fertility, and Development, most male gerbils reach sexual maturity by 3 months. The same is true for females. But both females and males can become mature sooner than this, from as young as 2.5 months.

Like us, gerbils have their biggest growth spurts before they become fertile. However, they continue growing after they have the potential to become parents, just more slowly.

Most gerbils reach their full size by around 6 months of age. But some may continue to grow until they are a year old. This depends mostly on genetics and diet. There are many reasons why fully grown gerbils might be getting bigger:

If you aren’t sure of your gerbil’s age or whether it should still be growing, see a veterinarian.

Is My Gerbil Overweight?

A gerbil that’s getting heavier and wider, but not longer, may be overeating. Both male and female gerbils can become overweight at any age. It’s most common in dominant gerbils, as they can restrict the food supply of the submissive gerbil(s).

Gerbils are supposed to weigh no more than around 110g for females and 135g for males. If your gerbil has a smaller frame, it could even be overweight at a lower weight than this. If it looks chubby and spends less time being active, there may be cause for concern.

According to Veterinary Clinics of North America, a body weight of 20% above normal indicates obesity. Though it might not sound like much, this is a difference of just 20 grams for a gerbil.

Obesity in gerbils can lead to significant health problems. Your gerbil may experience heart problems, skeletal and mobility issues, or diabetes. Obesity can even result in premature death.

As with any other animal, obesity can be tackled by adjusting the diet and increasing exercise. But don’t put your gerbil on a diet without professional advice. It could be that your gerbil has a larger skeleton, and extra weight is normal.