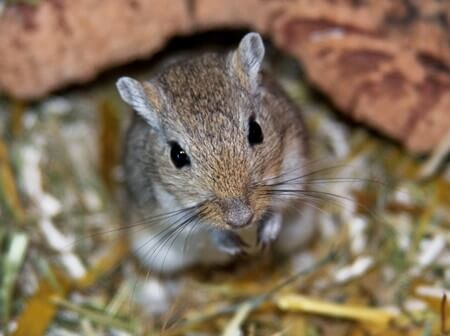 The period is a sign of fertility, indicating that the female of the species can have babies. But you may not have noticed fertile gerbils having a period.

Gerbils have an estrous cycle, which dictates when they mate. But they don’t go through a menstrual cycle. Instead, the lining of the womb is reabsorbed not expelled. This doesn’t negatively affect fertility.

Also, gerbils produce eggs any time they mate. This is unlike humans, who produce just one per month. This means that female gerbils become pregnant almost every time they mate.

Do Gerbils Have Periods?

Periods are necessary. Without them, the reproductive cycle wouldn’t work and wouldn’t make sense. That’s why it’s so difficult to understand how and why other mammals don’t have them, while we do.

However, you may already know that pets don’t have periods. No matter how long you watch them, your female gerbils won’t have menstrual cycles. But you may also know or have seen that gerbils can get in heat.

What Is a Period?

According to Endotext, a period is where the body gets rid of unwanted tissue. This tissue comes from the uterus, which is better known as the womb. Each month, the lining of the womb becomes thicker, making it more suitable for an egg to develop there.

But at the end of this development, if no fertilized egg is present, the lining is gotten rid of. This is what’s known as menstruation. This can take between a couple of days and a week, during which there are a couple of ‘heavy’ days. The process then begins again.

The external result of this process is bleeding. The uterus and the rest of the reproductive system are connected to the vagina, which is where the bleeding comes from. What comes out is about 50% blood, and 50% lining of the uterus.

The period is the end of the phase of greatest fertility. The time just prior to a period is when a person is most fertile, and afterwards, the least. But this doesn’t mean that gerbils don’t have cycles of fertility.

The period is only one part of the reproductive process. Around two weeks after menstruation, an egg is released from the ovaries into the fallopian tube. It travels along this tube to the uterus, also known as the womb. Once it’s there, the person is fertile, so could become pregnant.

Female gerbils do not go through the same menstruation process as people do. Instead, they go through a different-but-similar period called estrous. This isn’t to be confused with the estrus stage of the period in people, which is a separate thing.

The estrous cycle is the equivalent of the period in other animals. All mammals, other than great apes, go through this cycle instead. The cycle dictates when an animal wants to mate, i.e. when it’s ‘in heat’.

Rather than get rid of the uterus lining, gerbils reabsorb it. This prevents the loss of blood and lining which people experience. This doesn’t vary among species or specimens. It’s true among all gerbils.

However, you may notice a slight amount of vaginal discharge. This is natural fluid that all mammals have which is expelled as a way of cleansing the reproductive organs. This can get slightly bloody, and appear like menstruation, but medically it’s not the same thing.

How Does the Gerbil Reproduction Cycle Work?

Given that the human reproductive cycle relies on menstruation, it can be difficult to understand how gerbils reproduce without doing so.

The gerbil’s reproductive system is similar to ours. The gerbil has the same bodily organs as humans. Female gerbils have all the same reproductive organs: a uterus/womb (two terms for the same thing), ovaries and fallopian tubes, and a vagina.

This makes the cycle much quicker, which is 28 days/a month. Gerbils are in heat for around four days to six days at a time. They then have periods of the same length during which they aren’t in heat.  When they’re in heat, they mate, and become pregnant almost every time they do.

According to Laboratory Animal Science, certain species of gerbils will then carry their litters for three weeks before birthing them like all mammals. All gerbils have roughly the same period of gestation.

Gerbil females mate the same day that they give birth, and will fall pregnant again immediately. This ensures that the female continually produces litters and passes on its genes.

Do Gerbils Produce Eggs to Have Litters?

All mammals use eggs to produce young. Rather than an egg like a lizard might produce, these eggs are tiny: the size of a few cells.

According to the Journal of Andrology, male gerbils produce sperm like all male mammals. These combine with sperm to produce embryos. This is how people, and all mammals, create young.

In people, the egg is only available at certain times in the reproductive cycle. The egg travels along the fallopian tube from the ovaries to the uterus around two weeks after menstruation ends, although this can vary.

It’s only once the egg is far along the fallopian tube, or in the uterus, that it can be fertilized by sperm. That’s how life is made.

But unlike people, gerbils don’t release an egg only at a certain point in the cycle. They release one any time they mate. This is a far more efficient system, and ensures that gerbil females fall pregnant almost every time they mate.

If your gerbil cannot fall pregnant despite mating, this is an issue to do with its fertility, not its reproductive cycle. It may be infertile, although this is uncommon in gerbils. You could also try mating it with a different male, in case the male is the problem.

Signs That a Gerbil Is in Heat

You will notice the gerbil’s reproductive cycle through its behavior. It will be more interested in mating when it’s in estrous. So, you will see more interaction between the female and its male cage mates.

You may also see that your gerbil behaves differently when you touch it. When you touch it above its tail, it will freeze. It may also raise its rear slightly. This is a reaction to what the male does when it touches your gerbil’s rear.

Your gerbil will also mate with other gerbils at this time. Mating behaviors include:

To observe these behaviors, sit near your gerbil’s cage. If you spot them, then they are a sign of where your gerbil is in its reproductive cycle.

However, there isn’t much reason to do so. Your gerbil’s reproductive cycle doesn’t alter the way you care for it. If you don’t want your female to have babies, the only way to prevent that is housing it away from males, rather than monitoring its reproductive cycle.

If a person doesn’t menstruate, they can’t have children. It’s a sign that something’s wrong in their reproductive organs, or with their reproductive cycle. But the same doesn’t apply to gerbils and other pets, for reasons that most people don’t understand.

There are several answers to this question, but what’s clear is that the gerbil has good reason not to go through a period as a person does. They are:

Rather than being unusual, it’s gerbils that are normal. The human menstrual cycle is far more inefficient than that of other mammals.

We don’t have to think of predators, but other animals do. Specifically, they must think of ways to avoid being sensed by predators: to not be seen, heard, smelled or felt.

So, one way that gerbils avoid being seen by predators is by hiding in burrows. By not being seen, gerbils stay safe. The same applies to foraging at night, when it’s harder for predators to see them.

Menstruation would make a gerbil, or any other animal, easier for predators to detect. Many animals specifically sniff out blood, for example. The smell itself is strong.

And the other issue is that menstrual fluid could be left in a burrow or near one, which would draw predators to the entire group. By reabsorbing the lining of the womb, this issue is avoided.

Menstruation is a Waste

Menstrual fluid isn’t a waste fluid in the sense that other waste like urine is. Urine is mostly water, but also contains ammonia, urea, uric acid, and creatinine. These substances are by-products of protein production, and aren’t needed by the body for anything.

By contrast, menstrual fluid contains lots of blood. Blood is a vital resource that the body has to use energy and nutrients to produce. Besides that, in its job transporting nutrients, blood also contains lots of things like iron which are hard to come by.

Another way in which menstruation is a waste is that blood contains lots of water. Gerbils live in the desert, or in dry, desert-like grasslands. Here, water is exceptionally hard to come by. So, by avoiding menstruation, gerbils have a slight advantage in the wild.

Furthermore, gerbils need a shorter reproductive cycle than people because they don’t live long. That’s why they have cycles of being in heat that last four days, and are out of heat for four days. If they menstruated each time, they would lose far too much blood.

Gerbils Are Fertile at Any Time

The menstrual cycle dictates when a person is fertile, and when they aren’t. This isn’t a problem for people, because even thousands of years ago, we lived in large groups and formed monogamous relationships. We have lots of time to fall pregnant.

Gerbils don’t have such a luxury. They only live for two or three years in the wild at most. They form monogamous relationships, but most produce dozens of offspring to successfully create the next generation. They must produce young frequently, with a minimum of unproductive mating.

That’s why gerbils produce eggs any time they mate. This allows them to mate straight away after giving birth, without having to wait to produce another litter. This makes the gerbil an efficient and effective breeder.