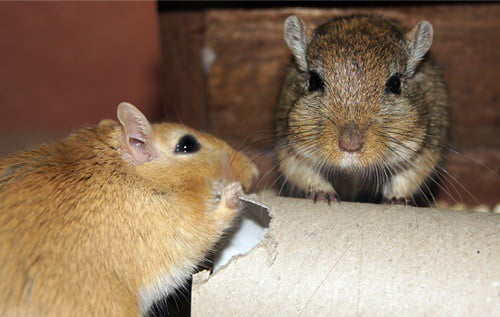 All animals have a reproductive cycle. The cycle determines when gerbils can mate and successfully produce the highest amount of healthy offspring. It’s called a cycle because it repeats over time.

Gerbils mate when the male mounts the female. Signs of gerbils mating include foot thumping and excited squeaking. The female can produce eggs at any time due to spontaneous ovulation.

You can get gerbils to mate by introducing a pair of breeding age (over 6 months old). In case of confusion, here’s some advice on how to tell male and female gerbils apart. Gerbils should be introduced with the split cage method. After introducing the pair, they will usually mate together and produce pups.

How Do Gerbils Mate?

The mating process in gerbils is as follows:

As is the case for all animals, the female will decide whether or not to accept the male as a mate. If she doesn’t, she will turn around.

If she does, she will stay facing forward. According to the journal Lab Animals, this is coupled with ‘lordosis’ where the back is bent and the rear raised. You will hear several sounds, including foot-thumping and squeaking.

After mating, both the male and the female will groom themselves. They will groom the usual places like their faces but will also groom their genitalia.

Mating usually occurs in the evening, so look then if you want to confirm that it’s happening. However, the mating act is quick and easy to miss. As such, you should look for other signs that gerbils are mating too.

After mating, the male will produce a copulatory plug (also known as a sperm plug or vaginal plug). This is like a tiny plug that stays in the female’s vagina after mating. It prevents other males from mating with that female.

Behavioral Signs That Gerbils are Mating

Gerbils that are interested in mating will display unique behaviors. This mostly applies to the males, which will try to impress the females in several ways.

One sign is foot thumping. This is a general sign of excitement in gerbils, but it’s closely associated with mating behavior. Gerbils will pound their rear feet, the noise of which can vary in volume.

Depending on their mood, your gerbils may also thump fast or slow. When one gerbil starts foot thumping, the others usually join in too.

Another sign is scent marking. This is where the male uses a scent gland to leave its scent around the enclosure. The idea is to make the females aware of the male’s presence and willingness to mate. The females will assess whether the male is a suitable partner from the strength of its scent.

The final sign is aggressive behavior. Males will box one another or wrestle in order to show which is the strongest. The strongest will get to mate with the female and produce offspring.

If the female can’t mate, it will get rid of the egg after a set amount of time. It will then begin the process again with a new egg. The female has no control over this process.

However, the gerbil reproductive cycle is different. A gerbil female can produce an egg at any time. Once the egg is produced, the female will stay in heat (a.k.a. in estrus) for around four days. This is when the female is fertile.

What Age Do Gerbils Mate?

Gerbils are ready to mate from a very early age, especially in comparison to other household pets. They can begin mating at around three months of age. Earlier is possible, although this can result in complications for the female.

This is when the reproductive cycle begins. The female will be able to produce eggs for mating at around two months old.

Gerbils need to begin mating early because their lives are short. Captive gerbils may live for two or three years, but wild gerbils usually don’t. They will often only reach a year. If the gerbil had an extended ‘childhood,’ the population would be unsustainable.

How Long Does the Gerbil Gestation Period Last?

The gestation period for gerbils is 24 days. This is much shorter than many other pets.

The reason why this period is so short is because of the gerbil’s evolutionary history. Rodents and similar animals are vulnerable to predators in the wild. They need to mate and have litters quickly to replace the gerbil population killed and eaten by predators.

Also, the gerbil lifespan is short at only two to three years. In the wild, this lifespan can be even shorter. A year isn’t uncommon. If the gerbil gestated its young for six months, many expectant mothers would die before giving birth.

The gestation takes slightly longer if the female already has a litter.

How Many Pups Do Gerbils Have?

The average litter is around six pups. The reason for the gerbil’s large litter size is the same as for its gestation period. Again, it helps the gerbil population to have lots of pups at once.

After giving birth, the female will be ready to mate again. Mating can happen immediately before mating, or even during as well as after. The female will then go through the same process, creating eggs ready to be fertilized. The cycle begins again.

Once the female has given birth, it will prepare a nest for the pups. It will take bedding that is already in the cage to do this. It will then take the babies one by one to this nest in a big pile. Your female gerbil will then nurse the babies in this nest.

Do Gerbils Mate for Life?

According to Current Zoology, gerbils often mate for life. The breeding pair will stay together throughout the female’s pregnancy. During this time, the female won’t have any particular needs like many animals do. Instead, it will be capable of feeding and moving around on its own.

After the birth of the babies, the male will stick around. It will help to co-parent the young alongside the female. This is less common in animals than the male leaving.

The reason why this occurs is easy to understand. The male and female will begin mating immediately before and after the birth of their young. The female can carry more pups again soon after giving birth to the first litter.

Sticking together is advantageous. It means that the gerbils can keep mating and produce young throughout their short lives. This is better than the usual arrangement for animals, where males fight to win mating rights throughout a mating season.

Instead, males and females stick together and mate continually throughout the year.

How to Make Gerbils Mate

If you want to breed gerbils, it’s easy. You don’t have to do much because the gerbils will do most of the work for you. Here’s how to mate gerbils in only a few easy steps.

Check whether your gerbils are male and female. If they aren’t, they won’t be able to have babies. You can do this at home without the help of a vet.

Pick up your gerbil and look between its hind legs. There will be three things to look for: the urethra, the anus, and the scrotum. On a female, the urethra and anus are close together.

But on a male, they will be ½ an inch apart. On males, you can also see a slight bulge which is their scrotum. These things are easiest to spot a week after the gerbils are born, which may be too late for you. That’s because this is before your gerbil’s fur grows in.

When you do pick a breeding pair, choose ones that are older than six months. Gerbils can mate at three months, but it’s better for their health if you wait.

Introduce the Male and Female Gerbil

If they aren’t already living together, then the next thing you should do is introduce the breeding pair. You can introduce them in a split cage, a special kind of cage with a barrier. This discourages fighting later.

When introduced, the female will be willing to mate roughly once every four days. When they do mate, this will take place over two hours. During this time, they will mate on and off rather than all the time.

The male and female may fight initially. This is usually nothing to worry about. Allow the pair to get used to one another, which can take a few days. If they keep fighting, separate them for a little while before introducing them again.

If they continue to fight to the point of injury, don’t consider using them as a breeding pair. Separate them and use another two gerbils.

Caring for a Pregnant Gerbil

The father doesn’t need special attention during this time, but the mother does. Remove toys like wheels and balls from the enclosure because newborn gerbils can easily harm themselves.

If possible, feed the mother a high-fat diet. This will help it produce milk for its babies later on. Sunflower seeds are an excellent source of fat in the gerbil diet.

Also, ensure that there is lots of bedding available. The mother will want to make a nest for her pups shortly before birth. But aside from these three things, the mother can take care of herself.

When the mother does give birth, don’t disturb it or its pups. Allow them to feed for a while and get used to their surroundings. Only begin interacting with them after two days/48 hours.

Can Gerbils Mate at Any Time?

Animals can mate at any time but can only breed successfully when the female is in estrus. This is when the female has an egg ready to be fertilized. If the pair mate at other times, the female won’t get pregnant.

According to the LVMA, female gerbils go through a process called spontaneous ovulation. This is where the female can ovulate, i.e., produce an egg, at any time. This means that gerbils don’t have regular ‘periods’ like many other animals.

You don’t have to worry about when your gerbils’ mate. Any time they mate could result in offspring.