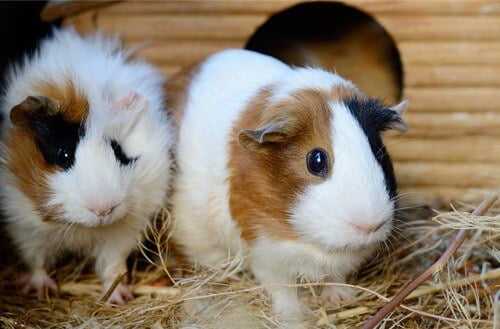 Telling apart small rodents isn’t initially straightforward. Unless you’re used to them, you may not know how to tell the difference between gerbils and guinea pigs.

The average guinea pig is stocky and 10 inches long, while a gerbil has a smaller build and is only 5 inches long. Guinea pigs have no external tail, whereas a gerbil’s tail is half its body length. A gerbil’s ears and eyes are smaller. Both rodents are variable in color and pattern.

To the untrained eye, gerbils and guinea pigs look similar to each other. However, once you know all of the most crucial differences, then you’ll never mistake one for the other again.

Use this table as a reference guide if you want to tell them apart:

Guinea pigs are larger than gerbils, and male gerbils are bigger than female gerbils. This is the easiest way that you can tell the two apart. If you put a guinea pig and a gerbil side by side, the guinea pig will be the one that’s bigger every time.

Guinea pigs are also noticeably stockier than gerbils. Gerbils look like small mice. While they can bunch up in a small ball, they are still more slight than a guinea pig. Guinea pigs look like large baked potatoes, big and rounded.

The guinea pig doesn’t have a tail at all. Its rear is rounded. It doesn’t even have a stumpy bob tail like a rabbit, for example. The gerbil has internal bones which earlier in its evolutionary history would have formed a tail. But these don’t poke out like a tail does.

This isn’t a result of breeding, either. All guinea pigs are the same. There are no gerbils that don’t have tails unless they lose them in accidents.

Gerbils are definitely fluffy and nice to pet. But their fur isn’t as long as guinea pigs. This is because the guinea pig itself is larger, so its fur is longer to compensate.

Also, some guinea pigs have exceptionally long hair. Whether it does or not depends on the breed. Peruvian guinea pigs are the best example of a guinea pig with long fur. These animals have fur up to four inches long.

This fur can be brushed. Some pet owners even make it look different by curling it. There are no gerbils that have fur this long. While gerbils vary in pattern and color, none have yet been bred with comparably long fur.

The common Mongolian gerbil only exists in the wild in one color. This color is called golden agouti. The name comes from another rodent, the agouti, which has the same pattern to its fur. Golden agoutis are as follows:

They may also have light cream patches around their ears, on their heads, or above their noses. That being said, gerbils in captivity can be found in many colors. They range from the lightest to the darkest browns and can also be slate gray, lilac, or piebald.

Guinea pigs can be agouti, too. And like gerbils, they can come in many different colors. According to the journal Genetics, their color can be changed by breeding too.

You can find golden, chocolate, white, slate, and beige guinea pigs. This means that you can’t tell the difference between a guinea pig and a gerbil using color alone.

Another difference is that the gerbil’s ears are different from those of a guinea pig. A gerbil has small, rounded, upright ears. They look like a mouse’s ears except smaller relative to the size of the animal’s head.

These ears sit upright and can move around in response to sound. The gerbil moves its ears to figure out where sounds are coming from.

A guinea pig’s ears are different. They’re more comparable to those of a rabbit than those of a mouse. Its ears are large and floppy and sit down at the side of the head. They look like large flaps.

When a guinea pig is younger, its ears move around more. But as they get bigger and floppier, they’re more difficult to move. A guinea pig may still move its ears when it’s excited, but not as quickly and easily as a gerbil can.

One less obvious difference is the gerbils’ and guinea pigs’ feet. Gerbils have long rear feet and legs. You can’t see this when the gerbil is lying down, but if it’s sat up or standing on its rear legs, you can. They look long like a kangaroo’s feet.

This also means that gerbils and guinea pigs behave differently. Because the gerbil’s feet are longer, this allows it to stand up frequently. It does so to survey its surroundings and to look for food or predators.

Guinea pigs don’t do this. They physically can’t because their rear legs are so short.

There are similarities between the two, which is why some people can confuse them. These include:

Are Gerbils and Guinea Pigs the Same Species?

Gerbils and guinea pigs aren’t the same species, even though they look somewhat similar. The scientific name of the guinea pig is Cavia porcellus, with Cavia indicating the genus the species is a member of. Guinea pigs are in the family Caviidae and the order Rodentia.

The most common pet gerbil’s species name is Meriones unguiculatus. They’re in the family Muridae, which is different, but the order Rodentia is the same as guinea pigs.

However, that doesn’t mean they’re the same species or even closely related. Most pet gerbils are Mongolian gerbils, which are from Mongolia. Guinea pigs are from South America, which is as far away from Mongolia as you can get.

This means that two species last shared a common ancestor a long time ago.

How to Tell a Gerbil and a Guinea Pig Apart

If you can’t tell the difference for any reason, consult a veterinarian, gerbil/guinea pig breeder, or a pet shop owner. They can tell you with certainty what kind of pet you have.

Guinea Pig vs. Gerbil as Pet

Guinea pigs will live for longer than gerbils if well cared for. The average lifespan of a gerbil is three to five years. That of a guinea pig is four to eight years. But overall, the two are roughly equal. As such, the choice comes down to personal preference.

Can You Put a Gerbil and a Guinea Pig in the Same Cage?

Gerbils live in social groups in the wild. Their groups have structure. There is a central breeding pair, which may be monogamous. This pair’s young will live with them until they’re old enough to start their own breeding pairs. They will be subordinate to the dominant breeding pair.

According to Physiology & Behavior, guinea pigs are the same. They will live in pairs, and their young will live with them for a short while. This may lead you to believe that the two species can live together, but they can’t.

This is because gerbils and guinea pigs don’t recognize each other as friends but as threats. A gerbil’s evolutionary instinct is to ensure the survival of its family, its lineage.