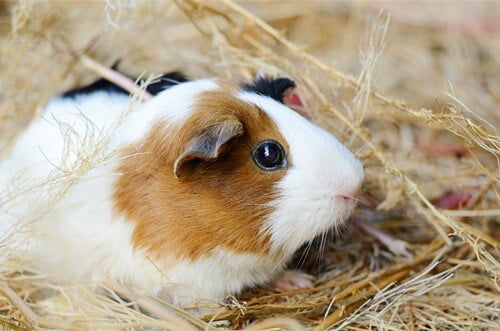 Gerbils are small animals that live in groups, and guinea pigs can too. If you own both, you may wonder whether you can keep gerbils and guinea pigs together in the same cage.

Gerbils and guinea pigs don’t get along because they are two different species. They will view each other as competitors for resources. This means they’ll fight over food, water, and space. They both scent mark their territory, which leads to fights. You can’t keep them in the same cage, or have them play in the same pen.

You can try introducing the pair in a split cage, as you do with individual gerbils. But they won’t form a pair bond, and won’t become friends. The best you can achieve is keeping them in the same room.

Are Gerbils Scared of Guinea Pigs?

Guinea pigs aren’t much larger than gerbils, but it will be wary of the guinea pig when it first sees it. The most obvious behavior is that the gerbil will hide. It will scoot off quickly, into its burrow when it sees something it hasn’t seen before. It may do this when it sees new people, too.

Alternatively, you may notice your drumming. This is a unique kind of behavior where the gerbil bangs its back feet, left and right, in quick succession. According to the European Journal of Pharmacology, this is caused by an ‘agonist,’ i.e. something the gerbil doesn’t like. This creates a surprisingly loud noise, which serves two purposes:

If your gerbil thumps its feet when it sees the guinea pig, that’s a sure sign that it’s concerned.

Are Guinea Pigs Afraid of Gerbils?

Guinea pigs can be afraid of gerbils. Some are more skittish than others, like with all pets. The signs of being scared in guinea pigs include:

Can Gerbils and Guinea Pigs Live Together?

They can live together, but not in the same cage. Because they’re two different species, there’s no way to stop them from fighting. They can’t form pair bonds to prevent that from happening.

According to Animal Behavior, gerbils form social bonds with other gerbils. The group size can vary between two (a pair) and more than a dozen. This particular study reported up to seventeen gerbils seen in the same group.

These groups are complex, and have a structure to them. The central pair are the dominant gerbils. They mate and have litters, and the rest of the gerbils in the group are their young. Gerbils other than those in the group are rejected.

These same groups can be seen in captivity. That’s why pet gerbils should live in pairs, too. The gerbil’s social nature hasn’t been forgotten through domestication. This means that gerbils and guinea pigs will reject each other no matter what.

However, you can keep them in the same home. There’s no reason why that wouldn’t work. The pair won’t attack each other unless you allow them to play or live together. They also won’t be unhappy with the presence of another pet somewhere in the home.

Can Gerbils and Guinea Pigs Live in the Same Cage?

Gerbils and guinea pigs shouldn’t be kept in the same cage. While they’re similar—they’re both rodent pets—they’re still different species. Different species will fight over food, water, and space.

There is no way around this issue. You can introduce the pair to each other, and they may not immediately fight. But once food and water are involved, the pair will fight for ownership of them.

This is an instinctual reaction. All animals will try to hoard resources for themselves. Every animal tries to ensure the survival of its genetic line. So, if any other animal comes and threatens to take away resources, the animal fights back.

This often applies to members of the same species, too. Gerbils live in small family units in the wild, and in captivity, if they breed. But if a ‘stranger’ gerbil were to visit, they would be attacked and not allowed any food or water nearby.

Can Gerbils and Guinea Pigs Form a Pair Bond?

With gerbils, you can acclimate a pair to each other’s company. According to Current Zoology, this is known as pair bonding. You begin by putting them in a split cage, one on each side, so that they get used to each other. This stops them from fighting in the way described above.

But few people have tried to keep gerbils and guinea pigs together. So, if you have two, you could try an experiment. Using the split cage method in the approved manner, you could see if the two gradually dislike each other less.

Can Gerbils and Guinea Pigs Live in the Same Room?

If they’re in different cages that are separated by at least a few feet, there should be no problem. The pair can’t annoy each other because they’re far apart.

The only issue might be that of smell. If both of the pets are in the same room, then the smell will travel from one cage to another. This could distress either one of the pets. That’s because most animals use smell to mark their territory.

Gerbils certainly do. They have specialist glands on their bellies, which give off a sticky, orange goop. This contains pheromones, which are unique to each gerbil. So, the guinea pig would smell the gerbil’s scent and would perhaps think it’s trying to horn in on its territory.

Guinea pigs do the same thing, but in a different way. Guinea pigs have scent glands around their bottoms, which they use to mark scent in the same way. So, your gerbil could smell that and think that the guinea pig is encroaching on its territory too.

Can Gerbils and Guinea Pigs Live in the Same House?

If they’re in different rooms, they would never see or smell each other. To keep them entirely apart, avoid letting them free to run around their pens at the same time.

The problem, again, is smell. While the pair won’t smell each other from different rooms, you may smell of one or the other. If you recently handled one, and went to handle the other, it could distress your pet.

Alternatively, if you let them run around pens in the same room, the room would smell like both of them. Then, the next time you allow them out, they may pick up that scent from the room. This could make each of them unhappy.

Keeping one pet in each room will only cause a minimum of problems.

Can Gerbils and Guinea Pigs Hurt Each Other?

Gerbils have large, long, sharp teeth. They keep these teeth sharp by gnawing on things. They can then use their teeth to defend themselves, either against predators or other gerbils. These are the gerbil’s only real weapon it can use in self-defense. If a gerbil or a guinea pig has ever bitten you, you’ll know how much it hurts.

When gerbils fight, they typically avoid using their teeth. Instead, they fight by wrestling and boxing. When gerbils wrestle, they try to pin each other. When boxing, they stand on their hind legs and slap/hit each other.

However, when a gerbil fight is serious, it can use its teeth. Serious fights ensue when gerbils Declan, i.e. when their social groups fail. They can also fight away strangers viciously with their teeth. That’s what a gerbil would do with a guinea pig in the same cage.

For their part, guinea pigs can fight hard too. They have the same kind of teeth as gerbils (all rodents do). When they fight in self-defense, they use their teeth. Both pets could draw blood from each other unless you separate them quickly.

Can Guinea Pigs and Gerbils Play Together?

Gerbils and guinea pigs cannot play together. They are different species, so they can only see each other as enemies competing for resources. They will spend their time fighting, not playing.

Gerbils are playful creatures. They are social, and spend lots of time in their groups. In these groups, they will occasionally play: chasing each other, play fighting, and wrestling. Sometimes, fighting can become real fighting. But they do play, too.

Guinea pigs are also playful. When they live together, they can play by chasing each other. And both gerbils and guinea pigs can play with people, provided that they trust them. Both can understand when a person is playing with them, and will play with the person back.

However, it doesn’t seem like this inter-species play extends to other species, i.e. between guinea pigs and gerbils. They won’t chase each other as a form of play, or play fight. If you think they are, they’re likely fighting for real.

Can Gerbils and Guinea Pigs Play in the Same Pen?

Even though they seem to be playing when they run around a pen, they aren’t. They’re exploring their new environment. You may notice each pet scent marking as it runs around its pen.

This isn’t playing: each pet is marking new territory for itself. Each pet wants to secure the area in case there’s some food or water there, which if you’ve fed them in the pen, there will be.

But if both pets were in the same pen, then they would both be scent marking the same area. You may spot your gerbil rubbing its belly on things, which is how it scent marks. Guinea pigs use their behinds. But scent marking is a sure-fire way of starting a fight, no matter how it’s done.

Besides, neither gerbils nor guinea pigs enjoy being near other species. It makes them uncomfortable. The other animal could steal its food, give it away to a predator, or be a predator itself.

The only exception is with people. Each would rather escape to hide somewhere less. What you certainly won’t see is your pair playing together.

How to Introduce a Gerbil and a Guinea Pig

A split cage is like a regular cage, but with two sections. Between the two sections is a divider, usually of glass, but which could be chicken wire. On each side of the cage is everything that a gerbil or guinea pig needs: food, water, an exercise wheel, and bedding.

Each day, you swap the pets twice, leaving everything else in place. The point is to get each pet used to the smell of the other. Both gerbils and guinea pigs scent mark, and this scent stays in the bedding.

Over time, the pair become accustomed to the smell of each other. That’s what happens with gerbils, at least. Eventually, they can live in the same cage because they’re used to each other. But this will never happen with a gerbil and a guinea pig.

What’s more likely to happen is that the pair will be unhappy with each other. Each would feel stressed with the scent of the other, because they’re different species.