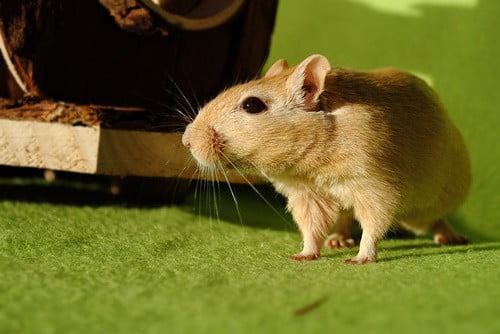 All animals mark their territory with their scent glands and/or by spraying urine. Gerbils are no exception to the rule, and primarily scent mark with their glands. They can also use urine and feces.

Gerbils rub scent glands on their bellies over things to leave behind a sticky orange oil. This oil contains pheromones, and is used to claim ownership of spaces/things. Gerbils can also recognize each other from the scent of their urine, but they don’t spray as much as other rodents.

It can be difficult to spot your gerbil scent marking. It does so subtly, moving normally, and gently brushing its belly on things. But if you watch your pet for long enough, you’ll see it happen.

What Is Scent Marking in Gerbils?

Scent marking involves the use of some kind of bodily fluid, often urine, to mark their territory.

The urine or fluid contains pheromones unique to that animal. Any other animal passing by will smell those pheromones and can recognize them. Animals have a better sense of smell than humans.

The other animal then knows that it’s trespassing in another animal’s territory. It will usually leave, because if it stays, the animal which laid down the scent will fight it off.

Claiming a territory gives the animal claiming it access to the resources, such as a nearby stream for fresh water, a population of prey animals, or a sunny spot to bask in. If there’s something good there, other animals may fight it to gain access.

Scent marking is also useful for attracting mates. A male can pick up on the scent of a female, or vice versa. Animals can tell whether another animal is fertile and strong from these pheromones alone.

Besides that, scent marking allows animals that live in groups to define their social structure. Through pheromones, a dominant animal can show that it’s big and strong.

Do Gerbils Use Urine to Scent Mark?

Gerbils are territorial, like any other animal. In the wild, gerbils live in small groups. The group all live in the same burrow, and will be near some kind of resource like food.

To stop other gerbils from coming close and stealing the food, they will scent mark the area around their burrow. However, they use a special scent gland on their stomachs rather than urine.

Gerbils prefer to conserve water because they live in dry locations: central Asia or the Sahara Desert, for example. Rather than waste water, they secrete a sticky solution from their scent glands.

That isn’t to say that gerbils can’t recognize each other through pheromones in the urine. According to Behavioral and Neural Biology, they can tell which other gerbils are friends, and which are strangers, from the scent of urine. This applies both to same-sex and opposite-sex pairs.

How Does a Gerbil’s Scent Gland Work?

A gerbil’s scent gland is a small patch on its belly. It will rub this small patch over things that it wants to claim ownership to. Any other gerbil that comes near will immediately recognize that there’s already a gerbil or gerbil group living there.

But that doesn’t tell you how the gland works. It’s a complicated biological process.

Where Is the Gerbil’s Scent Gland?

Instead of using urine to scent mark, gerbils use special glands on their bellies. This gland is an oval shape, longer than it is wide. It runs along the middle of the belly, and looks like a surgical scar.

The skin on the gland is rough. It has to be rough because it’s rubbed on things constantly. If it weren’t rough, it would become damaged even more easily.

According to Behavior Research Methods & Instrumentation, the scent gland of a male is twice the size of that of a female. The male will also use its scent gland more, roughly twice as much. That’s why scent gland tumors are more common in males than females.

How Does a Gerbil’s Scent Gland Produce Scents?

A gerbil’s scent gland is a patch of skin covered in sebaceous glands. Sebaceous glands produce sebum, a sticky oil that keeps the skin from drying out. All animals have them, including people.

This scent gland has evolved to produce more of this oil than necessary. It’s this oil which gerbils use to scent mark. It’s sticky and orange, and is responsible for the typical gerbil smell you’ll encounter if you don’t clean your pet’s cage.

The animal’s skin will produce this oil continually. You don’t notice it happening, but each individual gland secretes it in tiny amounts. In this case, the oil builds up until there’s enough to mark an area. There’s always enough to leave at least some scent.

The scent gland is dependent on androgens, a class of hormones that includes testosterone. According to Hormones and Behavior, supplemental testosterone injections for female gerbils increase both the frequency of marking and the size of the scent gland.

Why this is the case isn’t clear. Since gerbils stopped being such common lab animals, they haven’t been studied as much. But this makes sense: the more aggressive and dominant the gerbil, the more testosterone its body produces, and the more it marks. Each of these factors is linked.

How Do Scents Work?

If all gerbils used the same sweaty oil to scent mark, then all scent marks would smell the same. There would be no point to that, because then no individual gerbil could ever claim territory.

The oil is packed with pheromones. Pheromones are chemicals that are secreted or excreted, and work like hormones, but outside the body. Inside the body, hormones induce behavioral changes: they make an animal afraid or excited, for example. They work on the animal that produces them.

Pheromones are similar in that they can induce behavioral changes. But unlike hormones, they act on other animals. So, an animal will secrete hormones to change another animal’s behavior. The idea is to make other animals receptive to mating, afraid of another animal, or similar.

How Do Gerbils Scent Mark?

Gerbils move around with their bellies close to the ground. Their legs, while long for a rodent, don’t give them much height. So, their bellies are never too far from the ground to scent mark.

The first thing you’ll see is your gerbil walking around as normal. It will be sniffing and exploring as it usually does. However, you may then notice it clambering over things for no obvious reason. This is scent marking: it’s dragging its belly slightly over the thing it’s climbing.

It may choose any number of things to scent mark. If its cage has an exercise wheel and a food bowl, it will scent mark these things frequently. You can observe this behavior if you watch your pet.

You may also notice your gerbils scent marking each other. This is a dominance display. The dominant gerbil will scent mark the subordinate one to show it who’s the boss. This behavior is normal, but can lead to fighting if the dominant one scent marks too much.

Gerbil Scent Marking Too Much

Some gerbils scent mark their cages far more than others. It’s dominant gerbils that do this most frequently. In any group, there will be a dominant gerbil or pair of gerbils. The rest in the group will be subordinates.

The dominant one will scent mark more frequently than the others. This has the effect of strengthening its position as a leader. The gerbil which does this may even scent mark on other gerbils in the group.

However, the dominant gerbil may scent mark far too much. If it does, this can cause open wounds on its abdomen, especially on and near the scent gland itself. These wounds will heal, but over time they can cause severe damage to the tissue.

After enough of this damage, tumors may form. Scent gland tumors can kill your gerbil. If you suspect that your gerbil has one, you must take it to the vet. It may be either benign or malignant.

Captive gerbils scent mark in the same way that wild gerbils do. It’s an instinctual form of behavior, which means you can’t train your gerbil to stop doing it. Besides, gerbils have only been kept as pets for a few decades. There hasn’t been enough time for them to lose wild behaviors.

To understand why this is an issue, you must know that gerbils ought to live in groups. Gerbils pair up in the wild, and can live for life in a monogamous pairing. A group of young grows around them. These groups can number up to 15-20 individuals.

These gerbils all recognize each other from their scents. All the gerbils grow used to the dominant pair’s scent, for example. They associate it with the pair’s dominance. The dominant pair understand that the scent of the other gerbils is that of subordinate gerbils.

In captivity, the same applies. But if you were to erase these scents, suddenly the social structure is unclear. The gerbils don’t recognize each other. They may begin fighting, vying for supremacy.

Worse still, one or more of the gerbils may be entirely rejected. This is a problem known as declanning, and can result in vicious fighting, even to the death. Unless the group is separated, they may all be killed.

This can happen when you change your gerbils’ bedding. If you get rid of all of the bedding and clean the cage completely, no scent will be left. The gerbils will then all start fighting. But what won’t happen is for one of the gerbils to stop marking for no reason.