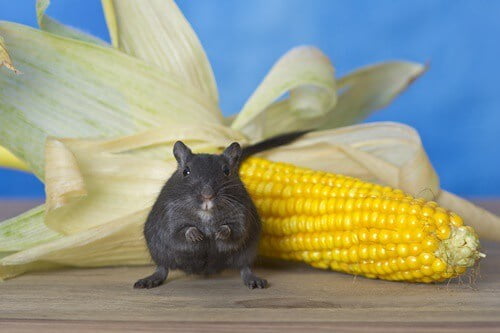 There are surprisingly few different gerbil colors. If you live somewhere that unusual colors are rare, you may have only seen golden agouti gerbils.

The most common gerbil color is the golden agouti, but you can also find white, blue, lilac, and gray. There are also different patterns, like spotting and piebald. These different colors are the result of genetic changes and are created through selective breeding.

The color and pattern of your gerbil’s fur make it unique and distinctive, which is half the fun of having a pet. You can even breed gerbils of different colors to make your own unique pet.

In the wild, you can only find gerbils of one color. This is called the golden agouti, and you’ll be familiar with it. This color and pattern combination is characterized by:

According to the San Diego Zoo, the term agouti refers to a different kind of rodent. But its fur color is similar to that of a golden agouti gerbil.

This is by far the most common gerbil color and pattern. It’s the kind you find in every pet store and which you may already have. But gerbils do come in more colors.

Through selective breeding, people have created all different kinds of gerbils. You might not find these at your local pet store because they’re much rarer.

Selective breeding is where a breeder picks two gerbils to produce offspring. According to a Japanese journal called Jikken Dobutsu, the gerbil ends up with different genes for coat colors than ‘regular’ gerbils.

They will pick two, for example, which have dark fur. The offspring of this pair will likely have even darker fur. They will continually ‘select for’ dark until the offspring is black. The same can be done for lots of different colors and patterns.

Gerbils can change color. Color changes are usually related to age. So, for example, a gerbil will develop darker fur as it ages, or its pattern will become more pronounced.

Take nutmeg gerbils, for example, which are a slightly darker and deeper brown than agoutis. These gerbils start with slightly orange fur when they’re young. As they age, they develop darker flecks in their fur to create a slight pattern.

This is a common theme among all kinds of gerbils. When they’re young, their fur will be lighter than their adult shade. Their adult color will then come in as they grow up.

Gerbils also change color as they progress from adulthood to old age. When a gerbil gets old, its fur will look ‘diluted.’ This means that it will be less bright than it once was. Again, this is nothing to worry about. It’s a natural part of the aging process.

What you won’t notice is a gerbil completely changing color. So, for example, your pet won’t turn from an agouti into a lilac. It won’t change from white to black, and its eyes won’t turn from black to pink or red. Rather, interesting gerbil colors come about through breeding.

Blue gerbils were introduced to the United States from Europe in 2008. They were first imported by Shawsheen River Gerbils, a gerbil rescue center that also works on breeding and in shows.

These gerbils aren’t bright blue. They’re a slate blue color, which is like blue mixed with gray. This doesn’t make them any less beautiful, though, and they’re striking compared to other coat colors.

If you’re not familiar with gerbils, you could be forgiven for mistaking them for other rodents. They look a little like a rat, with dark gray-blue fur. These have black eyes rather than red eyes.

They don’t have a pattern of any kind—the dark blue runs all along their back and sides. The only break in this pattern might be the underside, where a narrow strip of lighter gray runs from top to bottom. This stripe might touch underneath the gerbil’s nose, too.

The same color might appear on the gerbil’s feet. But other than that, these gerbs have no pattern.

Lilac gerbils are another result of selective breeding. In the same way as blue gerbils, lilac gerbils aren’t a bright purple color. If you were to picture a lilac gerbil, no doubt it would stand out. Purple is one of those vivid, extraordinary colors.

Their pattern looks similar to blue gerbils. They are one solid color all over. However, its feet might be a slightly different color. It can also have light white patches under its jaw and on top of its head.

The lilac gerbil is one of the best looking, but it may not be possible to find it near you.

Many animals normally have a color and pattern but appear white. When this occurs, the animal is usually an albino. Albinism is the result of a specific genetic mutation that gets rid of melanin. The same genetic change can even happen to people.

You can get white gerbils, and they even have pink or red eyes like albinos. But they aren’t albino. Instead, the change in coat color is caused by different, complicated genetic changes.

These gerbils are pure white. They look like lab mice but in the shape of gerbils. You can also find shades between a regular agouti and white, like cream or nutmeg. You can get white gerbils with either red or pink eyes.

It’s also possible to get white gerbils with black eyes. These are suitably called black-eyed whites or BEWs. While you won’t find them in every pet shop, white gerbils are located across the United States.

Black gerbils are like darker versions of a blue. Their fur is even darker, hence why it isn’t called a gray or silver. But something else that marks black gerbils out is their pattern.

The most noticeable thing is the gerbil’s dark fur. It isn’t dark enough to be called ebony, like a black piano key. Its fur is more of a black with a slight hint of brown to it. This fur runs all along the gerbil’s back and covers most of its face.

Aside from its dense black coloration, the black gerbil has patches of color. Its ears, nose, and mouth have small patches of brown around them. These may be more or less apparent depending on your gerbil’s unique genetics.

Black gerbils also have white whiskers, which stand in stark contrast to their black coat. They may also have white patches on their underside and jaw and around their feet. Depending on where you live, black gerbils may be rare, or they may not be.

Variegated is a pattern. It’s where the standard coat color (e.g., agouti or black) is broken up by small white patches. It’s a term that’s usually used in botany but applies to animals too.

The gerbil will also have a collar of the patch color. Most of the white will appear on the back and behind. When you combine the variegated pattern with the black gerbil color, you get a Dalmatian effect. These gerbils are especially cute.

There are lots of gerbils that have a similar mottled appearance. Spotted gerbils and pied gerbils both have a two-tone appearance. What’s different is the amount of white that each kind has.

Which Gerbil Color Is the Rarest?

There is no one color or pattern, or color and pattern combo, which is the rarest. That’s because what’s ‘rare’ depends on where you live. Some kinds of gerbils are rare in certain places, while others are more common.

So, golden agoutis are common everywhere you go. They’re available from almost any pet store. But aside from that, the color or pattern you’ll find is down to random chance. Which is common depends on what breeders you have near you.

Also, ‘rare’ doesn’t necessarily mean ‘good.’ There’s a kind of gerbil called the extreme white gerbil, which has a 90% white coat. Unlike many other types of white gerbils, this white is pure and clean. So, given that they’re unique and rare, you might want one.

But it’s not a good idea to get one. Extreme white gerbils have health concerns that go beyond those of normal gerbils. They can experience head tilt, for example, where the gerbil can’t balance itself properly. Their behavior is also unusual.