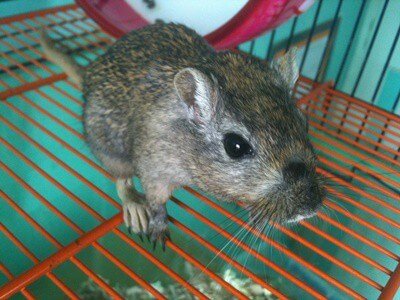 Gerbils don’t drink much water. So, if you notice that your gerbil keeps drinking, you’re right to be concerned about its health. Excessive drinking in gerbils could be connected to illness.

Your gerbil could be drinking a lot of water due to Tyzzer’s disease, diabetes, or kidney failure. Its drinking bottle may be broken or leaking, the cage may be too warm, or your gerbil may be adjusting to a drier diet.

It can be difficult to tell if a gerbil is drinking too much unless you watch it constantly. However, other symptoms of health conditions, like diabetes, may become evident.

How Much Water Should Gerbils Drink?

Unless there is a health issue causing your gerbil’s drinking, it isn’t an issue. Gerbils are all unique and have their own qualities. They may drink more than usual for no reason at all.

However, gerbils should drink around 4ml of water per day. Anything within 3ml to 5ml is a normal amount. This is far less than other rodents. Gerbils have adapted to survive without much water.

A gerbil that drinks more than this may have a health issue that needs addressing. You should observe your pet to see if it really is drinking too much.

Why Are My Gerbils Drinking Too Much Water?

The most common gerbils are Mongolian gerbils. Some of these live in the steppe. According to National Geographic, this is a vast, dry grassland. Others live in the Gobi Desert, which is one of the driest places on the planet.

You might think that this means gerbils need lots of water to survive. But the opposite is true. Gerbils have adapted to their conditions and hardly need to drink any water at all.

They eat lots of plant roots, which contain some water, to survive. There are no standing sources of water, except when monsoons reach the south-eastern Gobi. So, gerbils don’t need to drink frequently. This relates to captive gerbils as well as wild gerbils.

Only in special circumstances do gerbils change how much they eat and drink. Here’s a list explaining why your gerbil might be drinking more and what you can do about it.

1) You Adjusted Your Gerbil’s Diet

Wild gerbils get the water they need from their food. All animals do the same, but gerbils do so to an exceptional degree. They live in dry and deserted locations with few rivers and lakes. So, they get water from plant roots that they eat.

The same applies to captive gerbils. Many people feed them fruits and vegetables, which are exceptionally high in water. For example, according to Nutrition Value, lettuce is 95% water.

A gerbil that gets all of its water from food doesn’t need to drink from a water bottle. So, if you frequently fed your pet something with lots of water in it like a vegetable mix, it wouldn’t have needed to drink.

Comparatively, if you started your pet on gerbil food mix, now it does need to drink. These mixes contain lots of dry or dried foods. So, what you may be seeing is your gerbil adjusting to its new diet.

If this is the case, it’s not an issue. Your gerbil isn’t sick or in pain. However, rule out the other causes of excessive drinking from the list below.

2) Do Gerbils Get Diabetes?

If one of your gerbils drinks a lot, it may have a health condition. Gerbils can get diabetes in the same way that humans do. This was proved in a study published by PLoS One.

The scientists behind the study had accidentally bred a gerbil with higher blood glucose levels than average. They used this opportunity to study whether gerbils could experience the symptoms of genetic diabetes.

They bred the gerbils of this line together for several generations. They found that as the generations progressed, the gerbils were more and more likely to be insulin resistant. They would then display the symptoms of diabetes.

Gerbils can also develop diabetes through obesity. By feeding your gerbil too much, it can quickly gain weight. These gerbils display the same symptoms as those which have genetic diabetes.

One of these symptoms is drinking more than usual. This is a cycle: the blood contains too much sugar. The kidneys work to get rid of this sugar by taking it from the blood. This also filters out water, which means an animal with diabetes has to drink more.

Another sign that your pet has diabetes is excess weight, followed by weight loss.

3) Your Gerbil Isn’t a Gerbil

If you picked up your pet from a friend, they might have told you it’s a gerbil when it’s another type of rodent. Even pet stores can mislabel their animals. So, you might have read about gerbils that they hardly ever drink, but your pet seems to drink all the time. This would be confusing.

Pet stores are like any other kind of store. They’re staffed by regular people who may or may not care about animals. To the staff of your local store, working there may be nothing but another job. They could have accidentally told you that your pet is a gerbil when it isn’t.

Crucially, other rodents drink far more water and urinate more often than gerbils. Other rodents come from more temperate parts of the world, where there’s lots of water to go around. They may also use urine to mark territory, which gerbils don’t do.

4) Your Gerbil Is Sick

A key determinant of behavior changes is illnesses. When a gerbil becomes ill, it starts doing things differently in the hopes of combating its condition.

Normally when a gerbil is sick, it will drink less. However, there are anecdotal reports from owners that gerbils can drink more when they experience a respiratory infection. The reason why this should be the case is unclear, although it could be to:

A gerbil that’s close to passing away drinks far less than usual, though. So, drinking more is a bad sign, but not the worst one that you can see.

Your gerbil may not be drinking excess water at all. The bottle could be leaking water, slowly but surely. This would explain why you need to refill it so frequently.

Water bottles can easily break. They work like ballpoint pens. They have a small spout with a tiny ball at the end. Only when the ball is moved can water escape.

Any part of this apparatus could have broken. The ball could have been scratched and damaged or poked out of position. The spout or the tank could have developed a crack. Alternatively, your gerbils may have chewed it and damaged it themselves.

This isn’t helped by shoddy manufacturing. Value water bottles will break easily because their materials aren’t sturdy, and their manufacture was done on the cheap. As such, when buying a new one, consider buying a higher quality one this time.

Diabetes causes excess drinking because it affects the kidneys. In the same way, both kidney disease and kidney failure can cause extra drinking.

One such condition is glomerulonephritis. This is caused by the blood vessels of the kidneys becoming inflamed. Left untreated, it will eventually cause complete kidney failure. But in the meantime, it will cause your pet to drink more and more. Tumors can cause it. Other symptoms include:

If you notice these symptoms, take your pet to the vet. This cannot be treated at home.

Kidney failure is a more general term. It doesn’t refer to a specific condition like glomerulonephritis. Instead, it refers to when the kidneys stop working in response to something like the above or an infection. It causes similar symptoms.

Tyzzer’s disease is a bacterial infection that affects lots of different kinds of animals. It’s spread through feces, and it causes diarrhea, so it spreads quickly. Tyzzer’s disease can kill within days, so you must identify it before it gets too bad.

This condition attacks the liver, not the kidneys. It causes lesions all over the liver, which you can’t see, but are deadly. Tyzzer’s disease causes excess thirst because it’s responsible for diarrhea. The more diarrhea your pet experiences, the more it will have to drink.

Only antibiotics can prevent the condition from getting any worse. The vet may administer some to show you how to do it at home. You must also take the following steps:

These steps may seem complex and difficult, but Tyzzer’s disease is a tough condition to get rid of.

Your gerbil may be drinking too much because it’s too warm in its cage. Like people, gerbils that are too warm lose water quicker. To replace this lost water, they need to drink more.

To figure out whether this or something else is the cause, observe your pet. Check the temperature; look for symptoms of other health conditions; compare your gerbil to other gerbils in the same cage.