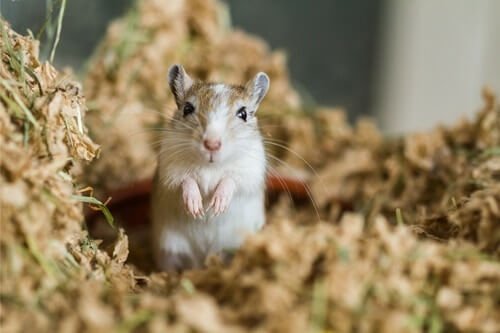 Determining your pet gerbil’s age is very important. For example, you shouldn’t separate gerbils before weaning age, or breed gerbils before they reach reproductive age.

To tell the age of a juvenile, you should look at where it is in its lifecycle (see table below.) Factors to consider include its size, weight, length, fur, and mobility. The most obvious signs of old age in gerbils include alopecia, weight loss, lack of appetite, and sudden diseases.

For juveniles, telling your gerbil’s age is straightforward because they have lots of different developmental stages. But, as your gerbil gets older, it can get harder to determine its age.

To explain a pet’s age to a child, most parents will talk about human years vs. pet years. So, one pet year might be seven human years, for example.

This is difficult to do with gerbils. Gerbils don’t live that long, to begin with. Also, their life cycle is different from that of humans. Gerbils are ready to mate at only three months, which is roughly 1/10th of their total life expectancy. Humans can have children comparatively later.

Moreover, gerbils can have babies up until they’re very old. Most gerbils pass away before they can’t have any more litters. Again, humans aren’t the same.

1 human year would be about 20-30 gerbil years. You could break that down further, and say that 1 human month is about 2 gerbil years.

How to Tell Gerbil Age (Juveniles)

Only through figuring out your juvenile gerbil’s age can you care for it correctly. But this is easy because there are many stages to a gerbil’s development. To tell what stage a juvenile gerbil is at, follow the table below:

When gerbils get their first coats, they are fluffy and thick. The point is to protect the babies, because they have less body fat. This is something they develop as they get older.

However, as they get more fat on their frames, this thick coat would keep your gerbil too warm. So, it molts to get rid of its old coat and grows a new one. This happens twice. The second molt, which is the most noticeable, takes place at four months.

This results in a definite change in coat quality. Adults have sleeker and shinier coats, which aren’t as thick. The point of having a coat like this is that it keeps your gerbil warm, but not too warm, and protects against the weather.

When a gerbil is born, it’s tiny. It has to be or the mother couldn’t give birth to it. As stated, gerbils are the size of the third bone in your pinky finger, after the top joint. But they quickly grow much bigger. Here’s a gerbil age chart describing gerbil sizes as they grow older:

Weighing a gerbil can be difficult. They are highly active creatures, so they won’t sit still on scales for you. Instead, place a bowl on the scales. Adjust the scales to account for the weight of the bowl, before putting your gerbil inside. You won’t have to hold it down, because it can’t escape the bowl.

Measuring your gerbil from tail to nose is hard too. You may want to lay out a ruler and photograph your gerbil next to it to make a rough guess at its length.

As well as growing larger, gerbils change in their body shape. This happens because your gerbil is putting on both fat and muscle. Each is essential to full function in adulthood. The addition of this tissue is why the gerbil goes through molts as it grows up, as described above.

When a gerbil is first born, it looks like a tiny sausage. Its body has no definition. But as it grows larger, you’ll notice a few things:

You will also notice that your gerbil is surer of itself. It can move quickly and with agility, which it needs to in the wild.

Signs of Old Age in Gerbils

That being said, the signs of old age are often the same. They may be accompanied by other signs of ill health, which accumulate over time.

Alopecia is the scientific name for going bald. Gerbils don’t go bald in the same way that people do, but they can lose hair for a variety of reasons. According to ALTEX, repetitive rubbing on cage bars, for example, will get rid of hair around the nose.

According to the National Academies Press, vitamin deficiencies will cause alopecia, too. Because of its slow onset, alopecia typically only appears in older gerbils. It’s a sign that your gerbil is old, although it doesn’t tell you exactly how old.

Gerbils begin their life with little muscle mass, and gain it as they grow older. But when they reach old age, gerbils begin to lose the muscle mass they gained. This is a sign of old age in all animals.

At the same time, your gerbil will lose its fat reserves. This occurs because your pet will eat less than it once did. To maintain its energy balance, your pet must use up the fat that it has stored. You can also spot the accompanying loss of appetite if you watch your pet over a period of time.

To track your gerbil’s loss of muscle and fat tissue, you may want to record its weight.

This is another symptom that doesn’t tell you an exact age, but is more common in older gerbils than younger. Older gerbils are more susceptible to health conditions than younger ones. There are several reasons why:

You may notice many health conditions, many acute but many chronic, too. Acute conditions like Tyzzer’s disease, respiratory infection and so on affect older gerbils more because their immune systems are weaker.

But it’s chronic conditions which are a sign of age. That’s because they take time to build up. Heart failure is perhaps the best example. It occurs after a heart attack, and is when the heart can’t pump blood properly. According to PLoS One, it can be common in some gerbils.

To be clear, these conditions can affect younger gerbils. But they affect older gerbils more. This means you can tell that a gerbil is getting old if it has one or more of these health issues.