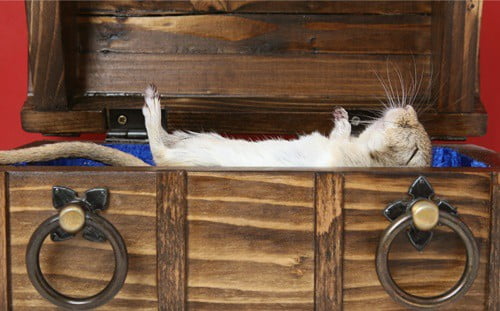 There’s nothing sadder than if your pet dies. Pet gerbils are susceptible to many illnesses and diseases. But it can be difficult to figure out what caused your gerbil to die.

You must check for the symptoms of each condition to ascertain the cause of death. The fix depends on the cause. Antibiotics will clear up respiratory infections and infected wounds. Surgery is required for tumors. Some conditions can’t be cured at all, such as strokes.

Common Causes of Death in Gerbils

Gerbils live in groups and are susceptible to health issues that are easily passed on.

Even if a gerbil survives every health issue that comes its way, it won’t grow that old. The rough limit for a gerbil’s lifespan is three to five years, at the absolute maximum. If you plan on owning small pets like gerbils, you need to get used to them passing away.

Some of these issues can be resolved at home, e.g., by cleaning your pet’s cage. Others can only be fixed by a vet, like a tumor on your pet’s scent gland. Others can’t be fixed at all. Use the list below to identify the issue and correct it where possible.

Dying of old age isn’t common among wild animals. Before an animal reaches an age at which its body shuts down, it succumbs to something else: a predator, the weather, a trap, or something else entirely. Of all the animals, people are the only ones that can now regularly survive to old age.

But in captivity, where an animal is cared for well by a person, it can easily reach old age. In its cage, your gerbil is kept far away from predators that might eat it. The stable temperature of your room keeps your gerbil healthy. And regular changing bedding and cleaning stop infections.

Your pet gerbil can reach old age if you’re a good owner. While not everyone agrees, old age certainly sets in by three years of age in gerbils. Between three and five, your gerbil may die of old age at any point. Five years old, or any longer, is exceptionally old for a gerbil.

The symptoms of old age include weight loss and loss of muscle mass, poor appetite, and lethargy. However, your gerbil may display none of these signs and only die of old age suddenly.

If you’ve taken good care of your gerbils, and they all reach their natural lifespans, then old age may be the explanation.

A heart attack happens when one of the arteries in the heart becomes blocked. This stops blood from feeding oxygen to each part of the body. This has immediate effects and can kill instantly.

This can happen because of a blood clot or because of air in the circulatory system. The heart can be under strain long before this, though, which has slightly different symptoms to what we understand as a ‘heart attack.’

Gerbils are prone to circulatory system issues because their hearts work hard. While the average human heart rate is between 60 and 100 times per minute, a gerbil’s heart can beat at 600 bpm.

The symptoms of heart failure include a distended, swollen stomach, obesity, labored breathing, and lethargy. The symptoms of a full heart attack are more severe: loss of movement and lack of appetite. Often the gerbil dies immediately.

Gerbils as more susceptible to strokes than many other animals. Embolisms cause strokes in the brain, which are blockages either of fat, blood, or air. The blockage causes brain damage, which in turn causes the symptoms of a stroke.

Gerbils are especially susceptible because of the structure of their brains. All mammals have a structure in their brains called the circle of Willis. This is a circle of arteries that deliver blood to the brain. In people, this structure is a connected circle shape.

According to Brain Research, in gerbils, the circle is incomplete. This means that they are more susceptible to embolisms than humans. The symptoms of a stroke include difficulty moving or complete paralysis, lethargy, and closed eyes.

There is no cure, although your pet may recover on its own. Strokes are distinctive, so if they were the cause of all your gerbils dying, you would know.

Unfortunately, neglect is one of the most common reasons why captive gerbils die. Gerbils are thought of as an easy first pet for a child to own. This is true if you compare gerbils to other pets. But they still need a certain level of care. It’s easy to mistreat a gerbil unintentionally. Ways that this is possible include:

According to Europe PMC, Tyzzer’s disease is a bacterial disease that affects many pets. Other bacterial infections are bad but not necessarily fatal. For example, if bacteria enter a wound, it becomes harder to treat. But it should get better gradually.

Tyzzer’s disease is far more severe than that. It’s a disease that is spread through accidental ingestion of diarrhea. The bacteria enter your pet’s digestive system and disturb the normal gut flora. This causes diarrhea, which then spreads the disease to other individuals, and so on.

The symptoms of Tyzzer’s disease include diarrhea, depression, emaciation, and a ruffled coat. You may also notice diarrhea staining around your pet’s rear. The bacteria attack your pet’s liver and cover it in lesions, although you can’t see this.

The bacteria that causes it, Clostridium piliforme, spreads through spores and is highly resistant to antibiotics and antiseptics. The bacteria can survive in bedding for a year.

This means that if your gerbils are consistently dying with the symptoms described above, Tyzzer’s disease is the issue. Begin by buying a new gerbilarium for your pets to live in. Isolate any gerbils you know to have the disease in a separate enclosure.

Clean the enclosure consistently each week. If symptoms keep appearing, you may need to buy yet another enclosure. Tyzzer’s disease is difficult to get rid of.

All gerbils have scent glands on their stomachs. These scent glands, like any scent gland, are used to mark territory. Other rodents use urine, but gerbils use a sticky orange substance to conserve water.

The scent gland itself is a small bald patch on your gerbil’s belly. It’s an oval shape and is a shade darker than the rest of your pet’s skin. If your gerbil is the dominant one in a group, it will frequently use its scent gland to mark territory.

This can become an issue over time. Because your gerbil continually rubs its belly on things, it can become inflamed. Eventually, open wounds can appear. These heal and reappear over time if your gerbil doesn’t stop. Unfortunately, this damages the skin irreparably and can cause tumors.

The symptoms of a scent gland tumor include dryness and extra baldness on your gerbil’s stomach, flaky skin and loose powdery dust, redness and swelling, and small hard lumpy patches. Consult with a veterinarian for a proper diagnosis.

These tumors, like any tumor, can be benign or malignant. Malignant tumors will spread and kill your pet. According to Vet Record, the only way to resolve the issue is surgery. The surgeon will use a scalpel to remove the tumor with your pet under anesthetic. This can’t be done at home.

7) Gerbils Killing Each Other

Gerbils can be vicious creatures. While they are friendly with people and each other, they can ‘Declan.’ The pair fight, and the loser must leave the social group.

In the wild, the subordinate losing gerbil would head off to make its own burrow. In captivity, it can’t escape the cage. The fights become more fierce because of this. The gerbils begin with wrestling and boxing. This doesn’t threaten your pet’s health.

What does threaten your gerbils’ health is when they attack each other with their teeth. A gerbil’s teeth are sharp and strong and are its best weapon. Gerbils that fight with their teeth will cause significant damage and can even kill.

Signs that your gerbils are fighting include loud squeaking and chasing. If a gerbil kills another through fighting, it’s obvious. The dead gerbil may be covered in blood and have severe and obvious wounds.

To prevent this situation from occurring, you must separate the gerbils. Place the rejected gerbil in a separate enclosure. Consider moving one of its friendly brothers or sisters in with it. Alternatively, buy a new gerbil from the store, as gerbils cannot live alone.

Respiratory infection is the medical term for a severe cold. Colds occur when the upper respiratory tract, i.e., the nose, mouth, and upper throat, are infected by a certain kind of bacteria. This bacteria can spread deeper into the lungs.

To counter this infection, the nose will produce lots of mucus. Mucus catches bacteria, and the whole lot is expelled through the nose. The same thing happens to gerbils when they get colds. Other symptoms include:

If you have lots of gerbils, a respiratory infection can pass between them easily. This could be the reason why lots of your pets died one after the other. The symptoms are obvious, so check for them in your surviving gerbils.

Treatment involves antibiotics and rest. You must talk to a vet to obtain the correct antibiotics. Which one is correct depends on the specific kind of bacteria affecting your pet.

Gerbil Died for No Reason

Sometimes gerbils die when you’re least expecting it. Your pet may appear healthy and happy, and the next moment is dead. When this occurs, you may never learn why. It could have been a combination of the above causes.

Gerbils are not healthy creatures. Aside from the many health conditions that can affect them, they are genetically ill too. All pet gerbils in the U.S. are bred from 50 or 60 original breeding pairs. These were originally bred for experiments in laboratories.

This means that most gerbils are inbred in some way. Their genetics aren’t as healthy as they could be or as their wild counterparts. This doesn’t help your pet’s health.

What to Do If Your Gerbils Keep Dying

If your gerbils keep dying and you don’t know why you must consult a vet. While this does incur a small cost, it’s necessary if you can’t figure out the issue on your own. Vets are used to diagnosing problems, even rare ones that aren’t seen often.

Your vet can advise you as to how you can stop more of your pets from dying. This might involve separating them to live in new groups, administering antibiotics, or cleaning their cages more often.

Your vet can also give your pet medicine. Antibiotics are necessary to combat infected wounds and colds. So, take your pet in for your vet to look at. This should only cost $20 to $40. You could also take pictures of your other pets for ease of diagnosis.