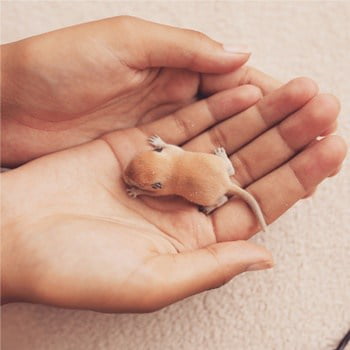 Gerbils change in size and shape as they go from babies to adults. The gerbil life cycle stages are very similar to those of other animals, but the life expectancy of gerbils is much shorter. Gerbils also begin breeding at a much younger age because of their comparatively short lifespan.

Gerbils begin life as babies. Their eyes and ears open after 2-3 weeks. After 4 weeks, all gerbils eat adult food and can live independently. They can begin breeding at 3 months. Wild gerbils will build their own burrows before they start breeding. Adult gerbils will have many litters before reaching old age.

This means that baby development in gerbils is a lot like the life cycles of other animals. You can easily recognize which life stage your gerbil has reached by observing its progress over time.

Table of Contents show
1 Gerbil Life Cycle Chart
2 Baby Gerbil Development
2.1 When Do a Gerbil’s Eyes Open?
2.2 When Do a Gerbil’s Ears Open?
2.3 When Does a Gerbil Start Eating Solid Food? (Weaning)
3 When Do Gerbils Reach Adulthood?
3.1 Living Independently (in the Wild)
3.2 When Can Gerbils Start Breeding?
3.3 Gerbil Prime Breeding Age
4 Gerbil Old Age
4.1 The End of a Gerbil Lifespan
4.1.1 Why Do Gerbils Die So Young?
4.2 Related Articles:

Baby gerbils (pups) are a lot smaller than adults. Gerbil pup development begins when your gerbil pair mate and the female becomes pregnant. They then develop inside her womb for between three and four weeks. Each litter consists of around five or six gerbils.

When they are born, baby gerbils are defenseless. They have eyes and ears, but they are sealed shut until the baby grows older. They are completely hairless, so they can’t even keep warm on their own. They are entirely reliant on their parents both for food and care.

The pups will not eat the same food as adult gerbils. They physically can’t because they don’t have teeth. Instead, they feed on their mother’s milk.

Throughout the first weeks of their lives, gerbils get bigger. They are initially only half an inch long. The milk they feed on contains lots of protein and fat, which is converted into new muscle and fatty tissue. This is essential to your gerbil’s growth.

When Do a Gerbil’s Eyes Open?

The next stage of a gerbil’s life is when its eyes open. Before this point, a gerbil is virtually blind. It staggers like a toddler. The gerbils will frequently clamber over each other as if they don’t know where they are.

They spend most of their time in the nest. But if you take them out, they will look around a little. They can’t do much but have grown to around the size of your thumb if a little thicker.

Their eyes begin to open at 14-18 days. You may notice that they open slightly at first, before opening fully later on. Also, one eye may open before the other, usually a day apart. This process begins at two weeks, and after a few days, all the gerbils in the same litter should have opened eyes.

Once a gerbil’s eyes are opened, it can explore its surroundings in earnest. You will notice your gerbil running around more and running around quicker. It will also be more mobile when you hold it in your hand. This signifies that it is less reliant on its parents than it was before.

When Do a Gerbil’s Ears Open?

After a gerbil’s eyes open, its ears will open. This takes place a day or two after its eyes open, so the date may vary depending on how quickly the litter as a whole develops.

This is yet another sign that your gerbils are becoming independent. They can now see and hear threats coming. This is when they begin displaying other grown-up behaviors, too, such as:

Before this occurs, a gerbil’s ears will be small and folded back against the skull. They will begin to poke out and grow larger at this point. By the time a gerbil is fully grown, the ears will stand up on their own. They will also be larger, proportionally to the head and in size, than they were.

When Does a Gerbil Start Eating Solid Food? (Weaning)

Weaning is when an animal stops drinking its mother’s milk. All mammals feed their young with milk, which is a nutritious liquid containing lots of fat and protein. It’s perfect for helping a baby animal grow. However, no adult animals (aside from humans) drink milk.

This process is a gradual one. It coincides with a gerbil’s development of teeth, which are needed to break down food. This occurs from 28 days onwards, i.e., around 4 weeks.

At the same time, you will notice a gerbil biting and chewing on things. This is gnawing and is a behavior that all gerbils display. Gerbils have incisors that continually grow, and they must be ground down through gnawing. So, once it starts, your gerbil will never stop doing this.

At the end of the process, the gerbil will never drink milk again. It loses the ability to because its gut can’t break it down anymore. This is true of any animal, including people who don’t drink dairy milk.

When Do Gerbils Reach Adulthood?

Once the gerbil is weaned, it can live on its own. Its senses of hearing and sight should be fully developed. It should be eating regular gerbil food and not milk. It should be digging burrows if none are available.

At this point, the gerbil still won’t be full size. Weaning is completed after a month, but the gerbil must still grow to reach its full adult size. This takes between six months and a year. Even then, ‘adult’ gerbils can grow unexpectedly.

Like all animals, though, gerbils vary in size. Some are much bigger than others. As such, what may appear a fully grown gerbil could still grow even bigger.

Living Independently (in the Wild)

Once they’re adults, gerbils can start living independently. They must do this to find another gerbil of the opposite sex, which they may mate for life with. This applies both to males and females and occurs at some point after reaching sexual maturity at three months.

Gerbil groups go through a process called ‘declanning.’ This refers to a group fracturing. The dominant breeding pair fall out with one of the subordinate young. They reject it and fight it, and it must leave or it could be killed.

This gerbil then goes off to live on its own. It’s fully capable of doing so: it can find its own food, explore safely, and sense dangers coming. Once it does so, it may find another gerbil to live with and begin breeding, producing its own group.

This may apply in captivity. According to Current Zoology, a pair can live together for their entire lives. But if you keep a breeding pair and their young, they will have to live independently because they will be rejected.

When Can Gerbils Start Breeding?

Gerbils must breed early in life. Like all rodents in the wild, they are vulnerable to predators that could attack at any moment. Gerbils don’t have the luxury of waiting for years, like other animals do, to have young.

According to Reproduction, Fertility, and Development, gerbils will start breeding from three months on. Males are ready to breed before females are because it’s more draining on the female. It’s the female that:

Admittedly, males do assist with raising young. But it’s the female that has to do everything else. The female’s health is the most crucial factor to consider when breeding.

This is the age at which gerbils produce the healthiest young and the most pups per litter. This is the most critical part of your gerbil’s life because it’s creating the next generation.

This period is between 3 and 18 months. During this time, breeding pairs should produce healthy litters and lots of pups. These pups will live with their parents and go through the process above, from birth to weaning and adulthood.

Breeding pairs have one litter after the other. The male mates with the female as soon as it gives birth. The purpose of this continual cycle is to produce as many young as possible.

During this time, the breeding pair will be dominant in the group. While the gerbil was subordinate to its parents, now it is the parent. It will display all the parents’ behaviors, such as frequent scent marking, especially if male.

After this period, the gerbils will continue mating and producing litters. However, the female may struggle to feed all of her babies with milk. You may also notice that the litters are smaller in number and that the young are smaller and weaker. After that comes old age.

The period between eighteen months and two years is when your gerbil is getting older but still isn’t ‘elderly.’ You could perhaps call it middle age. During this time, your gerbil will continue behaving as usual: mating, feeding, exercising and playing.

Transmissible conditions become more common because a gerbil’s immune system isn’t as strong. Other health issues, like obesity, are the result of bad behavior, e.g., overeating.

But if your gerbil is in good health, you won’t notice much difference.

The End of a Gerbil Lifespan

Gerbils reach the natural end of their development at the age of 2-3 years. This is when a gerbil can be considered old. A captive gerbil can survive for between three and five years.

When your pet becomes old, it will behave the same as it used to. Older gerbils, especially males, will continue to mate as they always did. While pairs may not produce as many young as they did before, some young is better than none.

But when it comes, the decline is quick. A gerbil that is soon to die of old age will rapidly lose weight, especially muscle mass. It will become lethargic and will eventually stop eating. According to Experimental Gerontology, the mean age at which this happens is just over two years old.

Three might seem like a young age. Other animals live much longer; some a decade, some two decades, some even longer. Gerbils and many other rodents share this short lifespan. Even with optimal care, three to five years is the maximum lifespan a gerbil can achieve.

Why Do Gerbils Die So Young?

Gerbils don’t have long lives because they don’t need to be a successful species. A successful species can propagate the next generation. Everything the animal does—eating, digging burrows, forming social groups, and mating—is for this purpose.

Gerbils already fulfill this purpose by the time they reach three years. Gerbils, both male and female, can mate after only a few months of life. Females produce litters over a handful of weeks. They can immediately begin mating and producing the next litter as soon as the first is born.

By the time a gerbil is one year old, it may have already reared several litters. Not every gerbil in the litter will survive, but many do and will have litters of their own. This means that there’s no need for a gerbil to live to, say, ten years old.

Bear in mind that 3 is the natural lifespan of a captive gerbil, not a wild one. Wild gerbils will likely die before then because of environmental factors and predators.