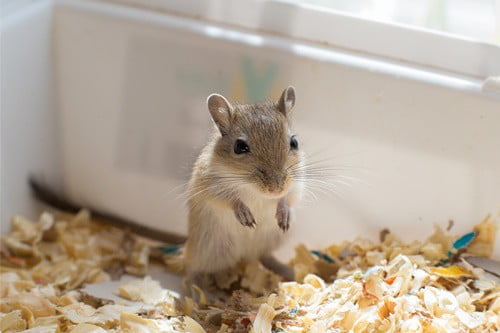 The joy of owning a pet comes from forming a close bond with it. Gerbils aren’t known for their loving nature, but anecdotal evidence suggests that they develop bonds.

When a gerbil bonds with you, it can be a very friendly and affectionate pet that loves spending time with you. It will even show visible signs of sadness when you’re not around.

Do Gerbils Recognize Their Owners?

According to Physiology & Behavior, one of them is saliva. That’s why gerbils rub their noses and heads together when they greet each other.

Your gerbil doesn’t recognize you that way. And no studies have looked at whether or how gerbils recognize their owners. But anecdotal evidence provided by owners suggests that they can.

Owners state that their gerbils are affectionate and trusting with them, so they aren’t with strangers. This makes sense and is similar to what we know about other pets. The only way that this makes sense is if the gerbils recognize you.

How Can Gerbils Recognize You?

Gerbils understand the world by using each of their senses. But like many animals, a gerbil’s senses are different from humans. So, for example:

Either way, this means that gerbils recognize the way you look and smell. The only issue is that people change the way they look by changing clothes, growing facial hair, or wearing makeup.

The way you smell is more reliable for your gerbil. Everybody sweats a small amount each day, even without any exercise. This smell is unique and recognizable to an animal, even if you can’t smell it.

The gerbils may also recognize the way your shampoo or soap smells. They would come to associate this smell with you.

Gerbils usually won’t like strangers. A stranger is anybody your gerbil doesn’t see regularly. So, if your family doesn’t care for your pet but are regularly around, they don’t count.

People who do count include friends you rarely see, family members who rarely come over, and people that you don’t know. Your gerbil will respond to these people with suspicion, if not alarm.

You can tell how your gerbil feels because it will start thumping its feet. According to the European Journal of Pharmacology, foot thumping is what gerbils do when they see a threat. The idea is to make as loud a noise as possible and to scare the threat away. Foot thumping also alerts other gerbils nearby to the potential ‘threat.’

Your gerbil may start doing this in many different circumstances. For example, if you stand up too fast, turn the TV on, make a loud noise, or flash a bright light. But they may also start foot thumping if they see a stranger.

Do Gerbils Bond with Their Owners?

Gerbils can bond with their owners, given time and affectionate care. They are the same as other pets. If you treat them well, they will come to like you. If you mistreat them, they won’t trust you.

It takes time for your pet to learn to like you. When you first take it home, it will be afraid of you. It may not want to come close to you and will spend its time hidden in its burrow. It likely won’t enjoy being handled straight away.

This alone is evidence enough of a bond. The bond may not be precisely the same as you feel towards your pet. But it’s a bond of some sort, even if we don’t fully understand it.

That being said, some gerbils seem to never bond with their owners. It doesn’t matter how kind the owner is, the gerbil won’t want to spend time with them. They don’t enjoy being handled and may not even enjoy being close to you.

If that’s the case, you have to give your pet space and allow it to interact with you how it wants. To force your pet to spend time with you would only make it unhappy. But what’s clear is that almost all gerbils can bond with their owners.

Do Gerbils Love Their Owners?

Love is a strong word to use when it comes to gerbils. While it’s clear that you might love your gerbil, what isn’t clear is whether it loves you in return.

Gerbils aren’t as advanced as humans. They don’t have the same brain structure, so they can’t think or feel the same way.

It’s not clear whether animals experience the same feelings as humans. Scientists think that most larger animals can experience fear because fear comes from the brain stem and limbic system, which even ‘primitive’ animals have.

Love is processed in the same part of the brain: the brain stem and limbic system. It’s possible that gerbils can feel affection in the same way that humans do. But we don’t fully understand what makes our emotions so powerful, so as for understanding emotions in other animals, that’s impossible.

That isn’t to say that gerbils can’t appear loving with their owners. They definitely can build a unique bond with them that they don’t share with other people. But as for whether they love their owners in the way that their owners love them, that’s unclear.

Do Gerbils Get Sad When You’re Away?

Again, it hasn’t specifically been studied whether gerbils miss their owners. It’s impossible to say for sure. But what we do know is that gerbils are social animals.

Gerbils need the companionship of other gerbils, or else they get depressed. You can see this expressed through their behavior. An unhappy, lonely gerbil will not be as playful or active. They may display stereotypic behaviors such as excess digging and biting at cage bars.

Your gerbils may miss you when you’re gone, too. They spend much of their time socializing with you. You provide them with food, water, and shelter.

That being said, gerbils don’t seem to view people as other gerbils. They don’t interact with people in the same way that they interact with other gerbils. So, they never try to mate with their owners and never declan with you like they would if they saw you as ‘family.’

While gerbils are social—according to Physiology & Behavior, they bond for life with other gerbils—it’s not clear whether that same sociality applies to people, too, when they go away.

How to Bond with a Gerbil

Getting your gerbil to like you can be difficult if it’s your first pet. Your first reaction will likely be to cuddle it and hold it tight, but that’s the wrong thing to do with a gerbil.

Don’t Force Your Gerbil to Do Anything

The worst thing you could do is force your gerbil to bond with you. If you try and do this, you’re destined to fail.

Imagine for a moment that you’re in your pet’s situation. A big scary animal, which may be a predator, wants to spend lots of time around you. Understandably, you aren’t comfortable with that. But it keeps picking you up and playing with you in its hands. You wouldn’t be happy.

Gerbils feel the same. The more you try to force them to spend time with you, the less they will like you. Instead, stay near your gerbil’s enclosure and allow it to see you. It will gradually come to understand that you aren’t a threat.

Learn How to Handle Gerbils

Handling gerbils isn’t as simple as picking them up and holding them. The gerbil could think you’re attacking it, or you could accidentally drop it. So, follow these tips to avoid problems:

Spend Lots of Time with Your Gerbil

Once your gerbil is used to your presence and your hands, spend lots of time with it. There’s no substitute for getting your gerbil used to you over time.

This allows your gerbil to begin to trust you. When your pet first spends time with you, it’s taking a chance: you could be a predator, biding your time to attack. So initially, your gerbil will be nervous.

But if you spend lots of time together, your gerbil will trust you fully. It will understand that you don’t want to hurt it or eat it. You can tell that your gerbil trusts you because:

It’s best not to handle your pet every day. Doing so will make it overly nervous. Even though it trusts you, it will still find frequent handling stressful. Instead, handle your gerbil every other day.