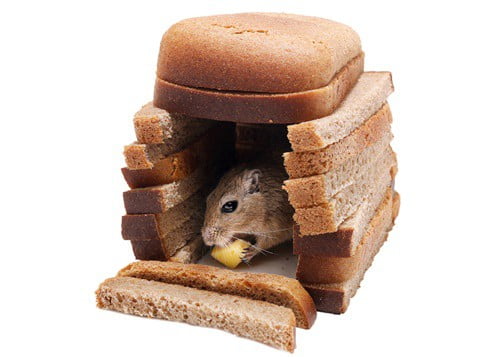 If you run out of gerbil food, you might want to feed your pet whatever’s in the kitchen. And everyone has bread to spare, but it may not be healthy.

Gerbils can eat bread, but it isn’t the healthiest choice. White bread is unhealthy because it contains lots of salt and sugar, so it should be avoided. Wholemeal or granary bread is better, as it has more vitamins and minerals. However, bread doesn’t meet a gerbil’s dietary requirements, so it’s only a snack.

This is the case for most processed human foods. If you do want to feed your gerbil bread, only do so occasionally. Feed your pet gerbil food mix the rest of the time.

Gerbils can eat bread and will eat it if offered. Gerbils will eat almost anything that you offer them. And if they don’t eat it, they’ll gnaw on it to keep their teeth sharp. So, gerbils will eat bread with no significant side effects.

Bread is made from wheat, although the kind of wheat can differ (e.g., GMO wheat). In the wild, gerbils eat grains like these as a part of their regular diet. So, wheat and grains aren’t toxic to gerbils.

That being said, gerbils can’t eat all bread. Some kinds of bread contain other problematic ingredients, which could be poisonous.

Bread should not form the bulk of your gerbil’s diet. All gerbils should eat gerbil food mix, which is formulated to meet every dietary requirement your gerbil has. You should avoid feeding your gerbil moldy bread.

Gerbils will eat almost anything they’re offered. And if it’s something inedible, like wood or plastic, they’ll still gnaw at it. So, when you offer a gerbil bread, it will eat it.

They do seem to like bread, but not any more than they like other foods. So, if you offer your gerbil bread alongside other foods, it won’t ignore the other foods and only eat the bread.

Gerbils will eat bread because it’s a nutrient-dense food. While you can get lots of types of bread, most offer similar amounts of energy. One slice contains around 100 to 150 calories, which is a lot.

Health Benefits of Bread for Gerbils

Bread is made of grains, which gerbils eat routinely in the wild. And if you look at the ingredients in your pet’s gerbil food mix, you’ll see that it contains lots of grains too.

However, bread isn’t the perfect gerbil food. It does have its downsides. The first is that bread is heavily processed. In most breads, much of the grain has been stripped away. This is the difference between wholemeal and regular bread.

White bread also contains lots of ingredients you might not expect. It has been bleached, for example, to make it bright white.

White bread (or sandwich bread) is made from grains like all breads. These grains are ground down and baked with water, which makes unleavened bread. People have been making bread like these for thousands of years.

You can also include additional ingredients like yeast, oil, baking powder, and dough improvers. With these ingredients, you can make something like the bread you get from stores.

The wheat grains used for making white bread are similar to those that gerbils eat in the wild. By feeding your gerbil bread, you won’t poison it.

The issue is that to make white bread, much of the grain is removed. It gives the bread a deeper, almost bitter and savory taste. Unfortunately, these parts of the grain contain lots of nutrients and fiber that are good for both people and gerbils.

According to Critical Reviews in Food Science and Nutrition, white bread also has lots of added salt and sugar. Processed sugars are added to aid the yeast and to make the bread sweeter. Salt is added to round out the taste. The issue is that neither of these things are good for gerbils.

The difference between white and brown bread is the bleaching process. This is where chemicals are used to make the flour whiter after it’s milled. Bleaching makes bread whiter, makes the texture more consistent, and makes the taste less bitter.

That’s why brown bread tastes so different from white bread. Chemicals like potassium bromate, azodicarbonamide, or chlorine dioxide are used to achieve this effect. Some of the chemicals used in the U.S. are banned in other parts of the world.

Either way, brown bread is slightly better for your gerbil than white bread. However, brown bread doesn’t contain the entirety of the wheat grain. Your pet still misses out on much of the fiber and nutritional benefits that wheat offers.

Either way, wholemeal bread is much better. It contains more fiber, which is essential for helping your gerbil go to the toilet regularly. Fiber also forces the gut to work harder because it’s difficult to process. This is good for overall gut health.

Also, wholemeal bread has more magnesium. Magnesium is a vital mineral for gerbils to eat. If your gerbil has seizures, which many do, magnesium makes them less frequent and less severe.

Wholemeal bread also often has seeds sprinkled on top. Seeds are good for gerbils in moderation because of their high levels of fat and protein. Wholemeal bread crusts with seeds make a good gerbil snack.

Granary bread is like wholemeal bread. The difference is that it contains malted wheat flakes, which give the bread a distinctive taste. Because granary bread is made from wholegrain flour, it’s similarly healthy to regular wholemeal. The crunchy toasted crust of granary bread makes a good snack.

Can Gerbils Eat Other Types of Bread?

Of course, there are more kinds of bread than those you use for sandwiches. These other kinds of bread may be topped with something or be made specially. Depending on the topping used, they can even be poisonous.

Toasted bread offers the same nutritional benefits as the bread it’s made from. If you pick wholemeal bread, especially with seeds, then toasting it makes it even better.

That’s because gerbils like crunchy foods. Toasted bread is similar to breadsticks in its texture, albeit not quite as crunchy. Your gerbil will prefer eating toast to regular bread.

Onion bread is like regular bread, but it has chunks of onion in it. The bread is usually white but can be of any kind. If you’ve had other pets, you may know that onion can be toxic.

According to Interdisciplinary Toxicology, onion isn’t as toxic to rodents as other household pets. However, it can still cause onion toxicosis when ingested in significant amounts. You should avoid feeding your gerbil onion bread.

Tomatoes are added early on in the baking process as part of the wet mix before the flour is added. There may also be sun-dried tomato throughout or sprinkled on top.

Tomato isn’t toxic to gerbils. However, it’s highly acidic. This can harm your gerbil’s digestive system and cause diarrhea. Considering that tomato bread is usually white bread, it’s best avoided.

Garlic bread is something you should avoid feeding to your gerbil. The bread itself is regular white bread, so that’s not the big issue here. It’s the other ingredient—garlic—which is.

Experts suggest that garlic is bad for rodents. In one experiment published in the Indian Journal of Experimental Biology, rats were fed garlic extract for ten days. The liver was immediately affected.

The study found that the effects of garlic were even worse if the rats had fasted before they were fed it. If the rats fasted for 24 hours, garlic was lethal.

It’s unclear how this applies to gerbils. There haven’t been any studies specifically on the effect of garlic on gerbils. However, most studies that apply to rats apply to rodents generally. So, it’s likely that garlic would harm your pet.

And besides that, garlic bread is made of white bread. As made clear above, white bread isn’t an ideal gerbil food because it’s high in sugar and salt. So, in short, don’t feed your gerbil garlic bread.

Breadsticks are the same as any other bread. The only difference is that the dough is stretched longer and thinner, so it gets crispy. Breadsticks are cooked on high heat for maximum crispiness.

Whether breadsticks are suitable for your gerbil depends on the kind you get. If you can find plain breadsticks, these are fine. However, many brands have salt, cheese, or Italian-style seasoning on top. It’s best to avoid giving your gerbil any of these things.

Plain breadsticks make a good snack because of their texture. Their extra crunchiness is appealing to gerbils, which need to keep their teeth ground down. Gerbils enjoy crunchy food like this.

Even so, the same issues that applied to white bread apply to breadsticks too. Breadsticks are high in sugar and salt, even if they don’t have a coating. So, again, there are healthier snacks you can find.

This is the case for most bread. As such, it’s not the healthiest snack. Seeds and nuts make better snacks for gerbils than bread does, so stick to those instead.