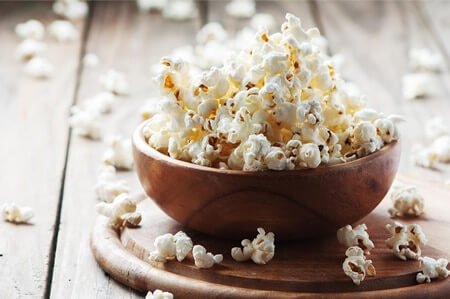 Popcorn is a healthy snack. As it is plant-based and whole-grain, you can also feed popcorn to gerbils. But you need to prepare it correctly, and offer it sparingly.

Popcorn is safe for gerbils to eat. However, gerbils should only eat plain popcorn, made without butter, oil, salt, sugar, or flavorings. Popcorn has little nutritional value for gerbils, so it should only be given as an occasional treat. Gerbils can also eat unpopped corn kernels but, be warned, they can be a choking hazard.

We’ll look more closely if popcorn is good for gerbils. We’ll explain how to make popcorn for gerbils at home, and how much to give them. You’ll also find out if gerbils can eat uncooked kernels and corn on the cob.

Is Popcorn Safe for Gerbils?

Popcorn is a puffy, starchy snack that is made from corn kernels. The variety used to make popcorn is called Zea mays everta. The kernels have to be dried out before being popped.

When popcorn kernels are heated up, pressure starts to build up inside. Eventually, the outer shell ruptures and the soft insides burst out. The resulting pieces of popcorn are over 20 times the size they were before.

Gerbils can eat popcorn, as long as it’s completely plain. You’ll often find corn-based products marketed to gerbils, and even in gerbil food mixes. However, most kinds of popcorn contain additives, such as:

These seasonings are bad for gerbils. Butter and oil are high in fat. Along with sugar, an excess of fat could cause your gerbil to become overweight.

Gerbils should also avoid too much salt in their diets. According to the International Journal of Cancer, gerbils fed high-salt diets are more likely to develop stomach cancer. To be safe, you should purchase plain, unseasoned popcorn kernels and pop them yourself.

Popcorn can be a choking risk for humans, but it isn’t dangerous for gerbils. They nibble their food thoroughly before swallowing it. But avoid giving them any tough or burnt pieces, just in case.

What is the Nutritional Value of Popcorn for Gerbils?

According to research by the University of Scranton, popcorn is a good source of fiber and is high in antioxidants. It also contains low levels of micronutrients such as:

These are all important nutrients for gerbils. However, because popcorn expands so much while cooking, this lowers its nutritional density. In other words, a gerbil would have to eat a lot of popcorn to get any nutritional benefit.

And if a gerbil ate too much popcorn, it would not have the appetite to eat any other foods. This would heighten its risk of developing nutritional deficiencies. Popcorn is low in protein, and lacks important nutrients such as vitamin C and calcium.

Plain popcorn isn’t unhealthy, and it’s fine to give your gerbils occasionally. But it should be offered as a treat, rather than a significant part of your gerbils’ diet.

How to Make Popcorn for Gerbils

Fortunately, it’s easy to make gerbil-friendly popcorn at home. You can make it on the stovetop or in the microwave. If you have any leftovers, you can season and eat them yourself.

Select only the fully-popped pieces to feed to your gerbils. Discard any unpopped or partially popped kernels.

To make popcorn for gerbils in the microwave, you will need a clean brown paper bag. Here’s how to get it ready:

Keep leftover popcorn in an airtight ziplock bag, with as much air removed as possible. Store it in a cool, dry place, such as the pantry. It will keep for up to two weeks.

How Often Should I Be Feeding Gerbils Popcorn?

Popcorn should not make up a significant part of a gerbil’s diet. It works well as a treat, as gerbils love the taste. It’s high in carbohydrates, but relatively low in all the nutrients that gerbils need to stay healthy.

But like us, gerbils often overeat tasty treats. Most gerbils will gorge themselves on popcorn if given the opportunity. They will fill up on it, and will avoid their ‘boring’ healthy food as a result.

This could cause a nutrient deficiency, which could be harmful. According to Diabetologia, gerbils with free access to food can also become obese and develop diabetes.  So, although popcorn isn’t bad in small amounts, you should limit how much you offer.

A small handful of popcorn per week is more than enough for a gerbil. You can give your gerbil other treats too, such as small pieces of fruit, vegetables, egg, and cheese. Gerbils benefit from variety in their diet, as it provides them with lots of different nutrients.

Unpopped corn kernels are unsuitable for humans to eat, as they’re too hard. But small animals, like gerbils, love to gnaw on them.

Gerbils’ teeth grow constantly. They have to keep them filed down by chewing on hard things, like wood. Unpopped corn kernels make a fun change from regular gerbil chew toys.

Some gerbils prefer popcorn when popped, but others are more interested in unpopped kernels. Try offering your gerbils a mixture, to see what they prefer.

You can buy dried corn on the cob treats, which are suitable for gerbils. You can give these to your gerbil as-is, or pop them in the microwave. Gerbils love to pull off the kernels one by one. The leftover corn cob is also great for chewing on.

However, there is a potential choking risk when giving your gerbils small, hard objects. If your gerbil was to inadvertently swallow a kernel whole, it could get stuck and cause a blockage. Be sure to supervise your gerbil carefully if you choose to offer unpopped corn kernels.

Can Gerbils Eat Fresh Corn On the Cob?

Fresh corn on the cob is also suitable for gerbils to eat. But like popcorn, fresh corn should only be offered as a treat. This is for two reasons.

The sugar content of fresh corn is quite high. Too much sugar can cause gerbils to gain weight or develop diabetes.

Fresh corn on the cob also has a high water content. Gerbils are desert animals and therefore don’t need much water. They conserve most of the water that they consume via food and drink. If a gerbil’s diet is too high in water, it could result in health issues such as diarrhea.

A study in Experimental Neurology also found that gerbils are particularly susceptible to water intoxication. This occurs when the body’s electrolyte balance is disrupted, and the brain can’t function as it should.

Don’t give your gerbil a whole ear of corn at once. Instead, cut some pieces of corn off and give them sparingly, as a treat. A few pieces once or twice a week is perfectly safe for gerbils.

Gerbils enjoy both raw and cooked corn. To cook corn for gerbils, you can steam it or boil it until it’s soft. Wait until it’s completely cool before putting it in your gerbil’s cage.

Steer clear of tinned sweet corn. This is often packed in salt water or has other additives that make it unsuitable for gerbils.