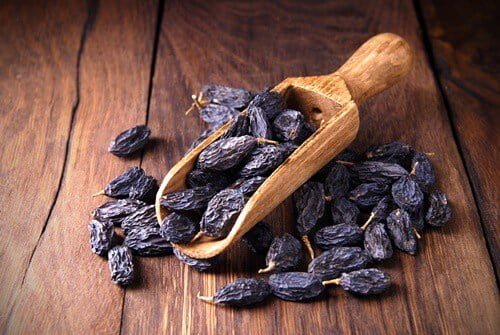 Raisins are one of those foods that are always in your kitchen, never used. They’re sweet and healthier than other snacks. But not all foods are suitable for gerbils to eat.

Gerbils enjoy raisins because they’re sweet and chewy. They have many different vitamins and minerals, and aren’t high in fat. But raisins are high in calories, so make a better snack than staple food.

Gerbils eating raisins won’t come to any harm, if anecdotal evidence is to be believed. But, because of ‘potential’ health issues, you may want to pick other, safer snacks.

Are Raisins OK for Gerbils?

Raisins are dried grapes. They are traditionally made by drying in the sun. They have a grape-like taste, but are sweeter, because the taste is concentrated.

Raisins are essentially the same as sultanas. Sultanas are dried white grapes. Currants are another variety of dark grape, which is dried in the same way. Gerbils can eat all three.

Gerbils can eat any dried fruit. Dried vegetables are often found in gerbil food mixes, for example, which indicates that they’re fine. Dried fruits are less frequently seen, but are roughly the same.

The main difference is that many dried fruits are too high in sugar to be healthy for your pet. Too much sugar means too much energy, which means weight gain. You have to be careful, and only feed your pet the right amount.

Gerbils love dried fruits, including raisins. Your pets will happily eat their way through many of them over a day. You can easily overfeed them with raisins if you aren’t careful.

Raisins are sweet and sugary, and most animals enjoy sugary or fatty foods. That’s because sugars and fats offer lots of calories, which every animal needs to stock up on. People enjoy fatty or sugary foods for the same reason.

Gerbils also like raisins because they’re chewy, and can be tough. Gerbils enjoy foods that they have to nibble and gnaw at. This keeps their teeth in check, stopping them from growing too long.

Are Raisins Poisonous to Gerbils?

There’s mixed opinion on whether gerbils are allergic to grapes/raisins or not. What is known is that some rodents, including mice, are allergic to them. However, other rodents like gerbils and hamsters may not be.

According to the MSD Veterinary Manual, this isn’t clearly understood. Grapes and raisins are toxic to certain other animals, and this has been well-studied. The effects are clearly defined: polydipsia (excess urine), lethargy, abdominal pain, and death.

What isn’t understood is the mechanism by which grapes/raisins are poisonous. It’s also not known why some animals are allergic while others aren’t, and what can be done about it.

Many owners have fed both grapes and raisins to their pets with no ill effects. But this could be due to only a certain kind of grape/raisin being poisonous, or a difference between seeded and seedless varieties. As such, be careful if you plan on feeding your gerbil any raisins.

Are Raisins Good for Gerbils?

Aside from the question of whether they’re poisonous, raisins are generally good for gerbils. They are like a healthier version of candy. According to Time Magazine, they are minimally processed, which is a good thing. Their positive aspects are summarized in the table below:

These are good reasons to consider raisins as your gerbil’s snack food. They certainly beat processed foods, like bread, which are high in energy but offer little fiber and hardly any micronutrients.

It’s the macronutrients in food which determine whether you can eat lots of it, or hardly any of it. Raisins are definitely on the latter end of this spectrum. That’s because they’ve been dried, so they’re concentrated. You can get lots of energy from just a few. Here’s a table of how much of each macronutrient raisins have, using data from Nutrition Value:

What these data indicate is that raisins are a highly nutritious food. They provide lots of energy, as seen in their overall calories, which is why your gerbil enjoys them so much.

However, that doesn’t mean that you can’t feed them as a snack. There’s no issue with feeding a small amount of raisin at a time. But you have to provide your pet with protein and fat from somewhere else.

Vitamins and Minerals in Raisins

Vitamins and minerals are essential to any healthy diet. The body needs them to perform vital functions, to support the immune system, and to stop organs from failing. Your gerbil is no different to you in its need for minerals like iron, magnesium, and calcium.

Raisins are a reasonably good source for a variety of vitamins and minerals. They contain the following ones in average amounts:

The only thing that raisins contain lots of is copper, while the other minerals and vitamins are found only in reasonable amounts.

However, that’s not to say that raisins are unhealthy. They contain far more of these micronutrients than processed foods do, and are a better snack than many others. You would do better to feed your gerbil raisins than human food or starchy food, like bread.

How Many Raisins Should Gerbils Eat?

If you do plan on feeding your pet dried fruits of any kind, don’t feed much. They should be considered a snack rather than a staple food.

With all snacks, the guideline is roughly the same. They should be fed alongside regular food, so that your gerbil gets something nutritious alongside its snack.

The most common way of feeding gerbils is with a tablespoon of food each day. If you wanted, you could replace half of this tablespoon with raisin. That way, your pet will get something nutritious (its gerbil food mix) alongside an enjoyable snack.

How Often Should Gerbils Eat Raisins?

As raisins are a snack, they shouldn’t be fed frequently. In recent years, people have become used to eating snacks every day, but that’s not a good idea. Your gerbil won’t benefit from eating a snack every day, or even every other day.

Instead, consider feeding your gerbil a snack once a week. This won’t significantly affect your pet’s nutrition, because it’s still getting its vitamins and minerals from elsewhere. And if your pet eats too much, it won’t quickly gain weight.

Ideally, you should weigh your gerbil every once in a while. Doing so will tell you if it’s losing or gaining weight. You can then adjust its diet as necessary. If it is losing weight, supplement its diet with slightly more raisins, or something fatty like sunflower seeds.

The main problem with raisins is that people think they may be poisonous to gerbils. However, this is only the case for certain other rodents like mice, and other household pets. Many owners have fed raisins, seedless and seeded, to their pet with no problems.

As such, there’s no issue with feeding your gerbil raisins occasionally. They are a better snack than most others, especially human foods.