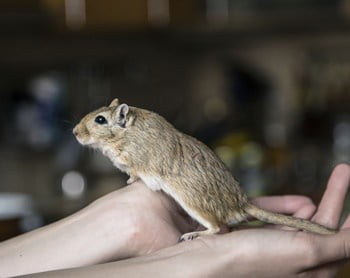 Most animals have a preference for daytime or nighttime. Being nocturnal can make it easier to hunt or hide, but being diurnal (active during the day) can also be beneficial.

Gerbils sleep for 6 hours during the day and 6 hours at night. They don’t have good night vision but can see well enough to find food and identify threats. In the wild, they are constantly hunted, so they are no safer in the dark.

Scientific studies show that gerbils are active equally at night and during the day.  However, some owners suggest that their gerbils become diurnal if they spend more time with them.

Table of Contents show
1 When Are Gerbils Most Active?
1.1 Are Gerbils Diurnal or Nocturnal?
1.1.1 Are Gerbils Afraid of the Dark?
2 Do Gerbils Have Night Vision?
3 Do Gerbils Need Light?
3.1 Do Gerbils Like Sunlight?
3.2 Do Gerbils Prefer Daytime?
4 Is Light Harmful to Gerbils?
4.1 Gerbil Heatstroke
5 Should I Leave a Light on for My Gerbils?
5.1 Related Articles:

When Are Gerbils Most Active?

Animals that are active at night are ‘nocturnal,’ whereas animals active during the day are ‘diurnal.’ ‘Crepuscular’ means that an animal is mostly active at dawn or dusk. This is less common.

The point of being crepuscular is that dawn and dusk are safe times to be busy/active. Animals that hunt at night have likely already eaten. Animals that hunt during the day may not be fully active yet. This means there are fewer predators around.

Also, environmental conditions are ideal. In the desert, the nighttime can be freezing. But the day can be far too hot to be active. Dawn and dusk are when the temperature becomes more temperate.

Are Gerbils Diurnal or Nocturnal?

According to a study on gerbil sleep patterns in Physiology and Behavior, they aren’t diurnal or nocturnal. Gerbils have long been a source of study because they were used as lab animals.

That being said, anecdotal evidence from owners can differ. Some owners state that their gerbils are entirely inactive at night. They spend all their time sleeping and all the daytime activities.

It’s thought that gerbils prefer being active in the daytime because there’s more going on. It’s a more interesting time for your gerbil to be awake. That’s because your gerbil can interact with you.

Are Gerbils Afraid of the Dark?

Most animals have adaptations to cope with the dark. While gerbils are small, they aren’t afraid of the dark. They have ways of keeping safe even when it’s dangerous:

It may be less frightened. That would be because there’s less happening. Fewer people are moving around the house, and there are fewer loud noises like TV and bright lights.

Do Gerbils Have Night Vision?

Gerbils have good vision. Because their eyes are positioned on the sides of their heads, they have a large field of view to see predators coming. But that doesn’t mean they can see well at night.

What does affect an animal’s night vision are rods and cones. Rods and cones are particular kinds of cells found in the retina. Cones are active during the daytime and are responsible for color vision. Rods are active at night.

Gerbils have a high proportion of rods to cones. According to Vision Research, they have 87% rod cells to 13% cone cells, although the precise number can vary.

This indicates that gerbils have reasonable night vision. Their vision isn’t as acute as nocturnal animals, which can have a proportion of 99% rod cells to 1% cone cells. But this suggests that they can see relatively well at night.

All gerbils should be kept in conditions that mirror their natural lives. Anything other than that will make them unhappy for reasons they may not fully understand. So, given that gerbils live in an area that gets both days and nights, you must provide your gerbils with some natural light.

Gerbils live in the desert, or areas very like the desert. They are used to bright sunshine, so seeing a little sunshine won’t harm them at all. However, it’s best if you don’t leave your gerbil’s cage in the full sun. It’s far better to keep it somewhere shaded, not dark, but out of indirect sunlight.

Gerbils find it far easier to warm up than to cool down. While the area they reside in the wild is sunny, it’s surprisingly cold for much of the year. That’s why gerbils are furry and live in burrows.

So, if you left your gerbils in the glare of the sun, their cage would get too hot. Avoid this by putting the cage somewhere that the sun isn’t directly shining.

Given the statistics above, you may say that gerbils like night and day equally. If they spend half of their time awake at night and half their time awake in the day, that would make sense. However, that doesn’t mean that they like both periods equally.

In the wild, the gerbil is preyed on by several different predators. The golden eagle is active during the day and has exceptional eyesight but can’t see at night. The snow leopard, which may eat rodents if very hungry, hunts at dawn and dusk.

The Gobi pit viper, though, can hunt at night. It uses heat-sensing pits in its nose to find the warmth of prey nearby. So, gerbils aren’t any safer during the day or night.

As for other indicators, gerbils will socialize and play both during the day and at night. So, it’s unclear which they like better. And like all pets, gerbils have unique personalities, so one of your pets may like the day while the other likes the dark of night.

Is Light Harmful to Gerbils?

While light is a natural part of your gerbil’s environment, it’s not entirely safe. You must ensure that your gerbil isn’t exposed to too much sun.

According to Harvard Health Publishing, heatstroke refers to the body overheating due to exposure to high temperatures.

This can occur because of sunlight, a hot room or car, or physical exertion. High temperatures for a prolonged period causes organ damage and can be fatal. Symptoms of heatstroke include:

Gerbils shelter from the worst of the midday sun in their burrows. However, this may not be possible in a captive environment. Many gerbils are neglected by their owners and left without burrowing material. Living without a burrow is stressful, but it can also cause heatstroke.

If you notice that your gerbil is experiencing heatstroke, you must take it to the vet immediately. Provide it with some cool water in the meantime.

This usually happens because of direct sunlight. Bear in mind that the sun’s heat will be magnified by the glass, contained by the walls of the cage, and absorbed by the bedding. It will be warmer in your pet’s cage than outside of it. It may also happen if the room is too hot.

Something you may not notice is when light is reflected. You may put your pet in a shady place, but the light from a mirror could reflect towards it. Check to see that this isn’t happening. If it is, relocate your gerbil.

Should I Leave a Light on for My Gerbils?

Some owners claim that their gerbil doesn’t like the nighttime. They find that their gerbils will be happy all evening. But then, when they turn the light off, the gerbils suddenly start foot thumping.

This would suggest that the gerbils are frightened of some threat or other. This does seem to be in response to the light being turned off. So, you could consider leaving the light on for them.

What’s more likely, though, is that they’re afraid of how quickly the light was turned off. In the wild, it takes a long time for the sun to set. Even once the sun has gone past the horizon, it takes ten to twenty minutes for it to get dark.

So, you might find that your gerbils will respond better to a gradual lessening of light in the room. You could turn the overhead light off and leave a lamp on. Or, you could leave a light on outside the room your gerbils are in that they could see. This may stop them from thumping.

However, it’s better to give your gerbil the most natural experience possible, so leave the room dark with one small light on if necessary.