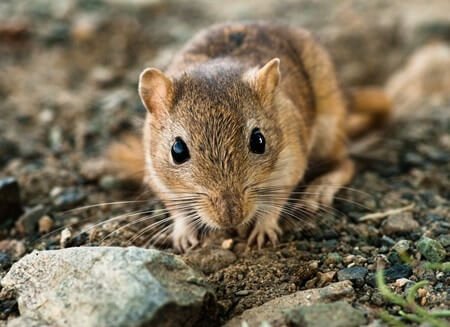 With their large eyes, you may think that gerbils have good vision. However, gerbils rely on their sense of smell significantly more than their eyesight.

Gerbils can see clearly but have better long-distance vision than near vision. Gerbils can see in color but are likely red-green colorblind and can see UV light like other rodents. Gerbils have poor depth perception but a wide field of vision, so they can see threats or predators coming.

So, gerbil eyesight has its strengths and weaknesses. There have been many scientific studies that prove that gerbils have a good vision.

How Well Can Gerbils See?

Here’s a table explaining how do gerbils see the world:

The gerbil has adapted to its environment. All of the positives about its vision help it spot predators better. They need to do so from a distance because their natural habitat is wide and open, not like a forest.

So, it’s difficult to say how well gerbils can see. Their vision is good for what it’s needed for, while the vision of other animals is good for other things. Your gerbil can certainly see you and make you out, that’s for sure.

What Can Gerbils See?

But it will see them differently. So, with things that are up close, it will see them less clearly. That’s because gerbils lack a specific part of the eye called the fovea. This is a pit on the retina’s surface that allows an animal to see things in great detail.

The fovea contains lots of vision cells that are all packed into a tight space. This tiny cluster of cells is so close together that they can make out minute differences in light and see much better detail.

How Far Can Gerbils See?

A gerbil’s sight is better at a distance than up close. Their vision is similar to being long-sighted.

The reason why a gerbil’s vision is this way is because of its natural habitat. Gerbils live in wide-open places like the Sahara, the Gobi Desert, and the Mongolian steppe. In these places, it’s unlikely that an animal can sneak up because there’s little vegetation to hide under.

So, what the gerbil needs instead is to see things from a distance. One example is the bird of prey. There are several birds of prey that hunt gerbils. The gerbil needs to see them coming from a long way away. So, it has a good vision for things that are distant but not close up.

The gerbil’s eye is like that of most other mammals. It’s large and rounded. It contains a retina with both ‘rod’ and ‘cone’ cells like those of other mammals. It has a pupil in its center. It has a lens, which focuses on vision.

Because the physical make-up of the eye is the same as that in other mammals, the gerbil’s vision is fairly easy to understand.

The Cornea, The Pupil, and The Iris

The pupil and the iris are two separate parts of the eye that work together. The pupil is the small black spot at the center of the eye. It is essentially a hole that light can fall through to the rest of the eye, where the light can be turned into signals that the brain understands.

The iris is like the gatekeeper of the pupil. It contracts and dilates, making the pupil smaller or larger. This allows an animal to control how much light enters the eye at any time.

This is a vital tool to possess. When it’s dark, an animal needs its pupil to be as wide as possible so that it gets as much light in its eyes as it can. But when it’s bright, it needs to filter out some of the light, or else it would be all but blinded.

The National Eye Institute state that the cornea is like a large bubble that sits over the pupil and iris. It is entirely transparent so that it lets light in. Because of its shape, it focuses light towards the eyeball.

The lens of the eye is a transparent section of tissue towards the front of the eyeball. Like its namesakes, the ‘lens’ focuses light. It takes the light that the cornea has focused on and focuses it even more.

Without the lens, its vision wouldn’t work. The issue is that light comes to the eye from all directions. If you wanted to make sense of this light without an eye, you would need a large area capable of catching it all. That’s impossible for an animal to do.

Instead, the lens captures all of this light and focuses it towards the back of the eye. If you’ve ever held a magnifying glass to burn something in the sun, the idea is the same. You take the light and focus it on one tiny point. That’s what the lens does.

The retina is a thin layer of tissue at the back of the eyeball. It sits behind the vitreous gel, which lies between it and the lens, iris, cornea, and pupil. The retina is like the screen upon which light is focused and caught.

Depending on where the light hits the screen, the retina converts it into a signal. This signal is then sent to the brain.

The retina contains cells called rods and cones which both interpret light signals. Rods help pick up light when it’s dark. Cones interpret the wavelength of the light to figure out its color.

Because of the way the lens focuses light, the image appears on the retina upside down. It’s only when the signal is sent from the retina to the brain that it’s ‘flipped.’

Do Gerbils Have Depth Perception?

One issue for gerbils is that they have little or no depth perception.

According to Science Direct, depth perception allows the perception of the distance between elements in an environment and a conception of an object’s length, width, and height.

An animal achieves depth perception by having two sources of vision whose field of view overlap. That’s why eyes are usually in the front of an animal’s face, quite close together. The two eyes see much the same thing, but the overlap allows the brain to construct a 3-D image.

This means that the animal can immediately understand which things are closer and which are further away. This is useful because it allows the animal to process threats quickly, e.g., a predator leaping at it.

Gerbils don’t have good depth perception because their eyes are on opposite sides of their heads. Their fields of view only overlap slightly, right in front of their noses. Whereas other animals can immediately tell whether something is close or far away, gerbils have to figure it out.

A gerbil will stand on its hind legs and nod its head up and down repeatedly to estimate a distance. Objects that move a lot when it does so are close, and those that hardly move are far away. This allows it to determine how far away something is.

Do Gerbils Have a Wide Field of View?

To compensate for their lack of depth perception, gerbils have wide fields of view instead. A field of view is how much you can see from one side to the other. It’s like the difference between a small, square TV (small field of view) and a big cinema screen (wide field of view).

Gerbils have wide fields of view because their eyes are on each side of their heads. So, one points in one direction, while another eye points in the other. This means the gerbil can see things to the left and the right without moving its head.

What makes their eyes even more effective is that they protrude from their heads. They can see even more to the side and rear because their eyes stick out by several fractions of an inch. This means you can’t sneak up on a gerbil.

Why is it better for gerbils to have a wide field of view, rather than depth perception? The difference is between predators and prey. Prey need to see predators coming from any angle at any time. The sooner the prey sees the predator sneaking up behind it, the more likely it survives.

The predator, on the other hand, needs to gauge movement and distance. It needs to know how far it is from its prey before it leaps for it. So, the prey has a wide field of view, while the predator has good depth perception.

So, the gerbil’s wide field of view compensates for its disadvantages because it allows gerbils to see threats coming from almost any direction.

What Colors Can Gerbils See?

It was long thought that gerbils were color blind. This would mean that they only see in grayscale, which is black and white with gray in between. This is what many owners still think until it’s conclusively proven otherwise.

However, scientists now think that gerbils can see similar colors to the ones we see. They are most likely ‘dichromats.’ This is another term for being red-green colorblind.

What this means is that gerbils likely can’t tell the difference between green and red. This affects other areas of color. So, a color that has red in it but isn’t red (like brown) would appear slightly different. However, color vision is still the same overall.

The reason why this is likely to be the case is that all rodents are dichromats. That’s because they have two kinds of light receptive cones in their retinas. This would indicate that they can only distinguish between a limited number of colors.

But again, the gerbil is limited in some ways while being capable in others. While it likely can’t see the same colors that we can, it can see UV light. UV light is a specific kind of light that the sun emits. Most animals can’t see it.

Rodents, though, can. They are visually sensitive to the UV spectrum, which means they can see ‘light’ from a shorter wavelength.

This allows them to see more easily when there’s lots of UV light. During the morning and sunset, there isn’t much of the regular light that we see, but there’s still lots of UV light. So, this adaptation helps rodents like gerbils see better at these times.

This is an advantage over other animals like predators. The predator will still have limited vision during the darker twilight hours. But the gerbil can see well because it sees both regular light and ultraviolet light.

Another way this may assist gerbils is that certain kinds of scent marks are visible under UV light. Urine used for scent marking glows this way. While gerbils have a special scent gland for scent marking, they still mark territory with urine. The gerbil can both see and smell these marks.

As for what color this ultraviolet light appears to gerbils, that’s unclear. The visible light that’s closest to UV light is purple/violet. So, it’s likely that the light appears a sort of purple, which is even more purple. It’s impossible to imagine what this color might be like.

Do Gerbils Rely on Their Vision?

Animals that can see all rely on their vision in certain ways. Using vision, an animal can see a predator coming. It can find food more easily, especially with color vision (e.g., for picking berries). It can see whether food is ripe or rotten.

Gerbils undoubtedly rely on their vision to meet each of these needs. So, if a gerbil sees a sudden movement, it runs to hide. This happens both in captivity and in the wild.

But gerbils rely on their other senses, too. They listen for threats, for example. But more important is the gerbil’s sense of smell.

So, gerbils have good vision, but it doesn’t need to be exceptionally good. That’s because it can use its other senses to make up for it.