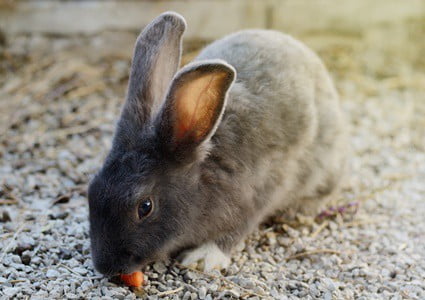 Gerbils and rabbits are sociable and friendly animals. However, that doesn’t necessarily mean that they’ll get along well together. They’re different species that would never naturally interact in the wild.

Keeping Rabbits and Gerbils as Pets

Rabbits and gerbils both make excellent family pets. They are friendly, intelligent small animals that get on well with humans. If you like keeping gerbils, you’ll probably enjoy the company of rabbits, too. Gerbils and rabbits are similar in certain ways. For example:

But despite their similarities, rabbits and gerbils are different species and have unique care requirements.

For example, rabbits are much larger than gerbils and need a lot more space. Hutches aren’t big enough for most rabbits – they need a large playpen or small room to exercise in. Gerbils, on the other hand, are small enough to live in tanks or gerbilariums.

And while most gerbils and rabbits love to be petted, most rabbits hate being picked up and held. This is because they feel unsafe if their feet aren’t on the ground.

Are Rabbits Rodents Or Lagomorphs?

Rodents, such as gerbils and mice, belong to the taxonomical family Rodentia. Rabbits, on the other hand, are lagomorphs (belonging to the family Lagomorpha). They share this family with hares and pikas.

Although rabbits aren’t rodents, they do share several characteristics with them. For example, rabbits and rodents both have continually-growing teeth. Rabbits like to burrow, as do many rodents (including gerbils).

They also have a herbivorous diet, similar to many rodents such as chinchillas and guinea pigs. Gerbils, on the other hand, are omnivores.

So, how are rabbits different from rodents? According to Berkeley University of California, rabbits and rodents have different skeletal features.

For example, rodents have one pair of incisors (cutting teeth), whereas rabbits have two. These extra teeth help rabbits cut through the tough dried grass that makes up most of their diet.

Can Rabbits and Gerbils Get Along?

Rabbits and gerbils never interact in the wild. This is because they come from entirely different areas of the world.

Pet gerbils are also called Mongolian gerbils. As their name suggests, they are found mostly in Mongolia but also in some parts of China and Russia.

Domestic rabbits, on the other hand, are descended from wild European rabbits. They live only in Western Europe (and Australia, where they have been introduced).

Because of this disparity, it’s hard to anticipate whether a pet gerbil will get along with a rabbit. Depending on each animal’s personality, they may ignore each other, play together, or fight.

Both gerbils and rabbits are prey animals. Their instinct is to perceive any unknown creature as a potential threat. Rabbits are much larger than gerbils, so your rabbit may come across as intimidating.

If either your gerbil or rabbit feels frightened, it may lash out. Both species can be fierce when defending themselves.

That being said, there’s no guarantee that they will fight. Rabbits and gerbils are friendly animals, and rabbits are known for forming friendships with other species.

You can experiment by allowing your rabbit to approach the gerbilarium while your gerbil is inside. They can’t hurt each other through the glass or cage bars. This will enable them to get used to the sight and smell of each other in a safe environment.

According to Laboratory Animal Science, rabbits are herbivores. This means that they only eat plant materials. A rabbit’s digestive system can’t process animal flesh as it would make it sick. A rabbit’s diet typically consists of:

Because they only eat plants, a rabbit would never try to eat a gerbil.  But that doesn’t mean your rabbit won’t hurt your gerbil.

If it feels threatened, a rabbit may attack a gerbil in self-defense. Rabbits can also be territorial and pick fights if they feel their space has been invaded.

Rabbits are much stronger than gerbils, and they have powerful back feet. An accidental kick could be fatal to a gerbil. That’s why it’s vital to never let a gerbil and rabbit alone together.

Can Rabbits Play with Gerbils?

Rabbits and gerbils can sometimes play together successfully. But as with any two animals, it depends upon their character. You can’t tell whether they’ll like each other until they meet.

To be on the safe side, it’s best not to allow your gerbil to play together. If they fight, they could sustain injuries. Even if you’re supervising them, you may not be able to separate them in time.

That being said, they may get on well, provided their personalities match. If both your gerbil and rabbit are friendly and laid-back, they could become friends.

Before you allow your rabbit and gerbil to meet, get them used to seeing each other through the cage. If they’re familiar with each other before they meet face-to-face, there’s less risk that they’ll fight.

There will always be a risk when letting two animals of different species interact. Supervise them closely whenever they’re together.

How to Introduce a Rabbit and Gerbil Together

If you decide to allow your gerbil and rabbit to play together, here’s how to do it safely:

You could also consider putting your gerbil in an exercise ball when the rabbit is around. That way, the animals can interact but can’t touch each other.

However, be careful that your rabbit does not mistake the ball for a toy. If it tosses the ball around, your gerbil could get hurt.

If your gerbil and rabbit seem to get on well, you can let them play together occasionally. But never leave them unsupervised, even if they seem the best of friends.

Can Gerbils and Rabbits Live Together?

Both rabbits and gerbils are social animals, and they don’t like living alone. According to the American Association for Laboratory Animal Science, rabbits kept alone often show signs of stress. Similarly, gerbils housed individually are prone to depression.

But can rabbits live with gerbils? Unfortunately, gerbils and rabbits need the company of other members of their own species. If your gerbil lived with your rabbit, neither species would benefit from it. There are several practical reasons why gerbils and rabbits shouldn’t live in the same enclosure.

For the above reasons, a gerbil should never live with a rabbit. However, you can place the gerbilarium and rabbit hutch in the same room so that they can see each other.