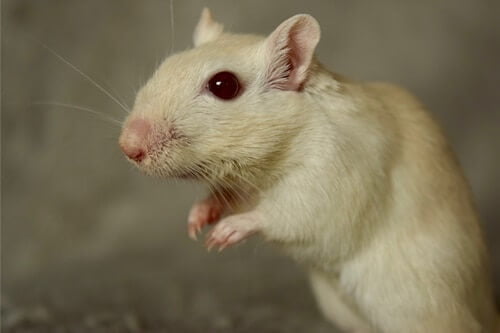 Wild Mongolian gerbils have golden agouti fur and black eyes. For a long time, there was no such thing as a gerbil with red eyes. But nowadays, there are four different gerbil eye colors, including red.

Pet gerbils’ eyes can be black, wine, red, or pink. Wine eyes look almost black but glow red in bright light. Red eyes are a deep ruby color, and pink eyes are slightly lighter. All gerbils, regardless of eye color, can sometimes get red mucus around the eyes. This is caused by stress or illness and can be treated.

We’ll describe the four different eye colors that gerbils can have. You’ll find out whether albino gerbils exist and if gerbils with red eyes are blind. We’ll also explore why gerbils sometimes get red stains around the eyes.

Table of Contents show
1 What Gerbil Eye Colors Are There?
2 Are There Albino Gerbils?
3 Why Do Some Gerbils Have Red Eyes?
4 Are Gerbils with Red Eyes Blind?
4.1 How to Tell if a Gerbil is Blind
5 Why Is My Gerbil Red Around Eyes?
5.1 What Causes Gerbil Red Eye Discharge?
5.2 How to Treat Red Eyes in Gerbils
5.3 Related Articles:

What Gerbil Eye Colors Are There?

When Mongolian gerbils first arrived in this country in the 1960s, only their wild coloration existed. This is known as “golden agouti.” Golden agouti gerbils have black eyes, and their fur contains a mix of golden, black, grey, and brown.

But since the 1960s, many different color mutations have been discovered. These mutations can change a gerbil’s fur and eye color.

There are no differences in behavior between gerbils of different eye colors. Gerbils with varying colors of eyes will get on fine and treat each other the same. Whether you get a dark-eyed or light-eyed gerbil is a matter of personal preference.

Are There Albino Gerbils?

Albinism is a condition that can affect many different animals, including rats, mice, and guinea pigs. But albino gerbils don’t exist – at least, not as pets.

Albino animals are born with no melanin (dark pigment) in their hair, skin, or eyes. This means that they usually appear white all over, with red, pink, purple, or pale blue eyes.

Some gerbils, on the outside, look as though they are albino. A gerbil with red eyes and white fur is called a “red-eyed white” or “pink-eyed white.”

But neither red-eyed nor pink-eyed white gerbils are truly albino. They are “pseudo-albino.” This means that they have genetic mutations that make them look albino without really being so.

True albinism has been seen in gerbils, but it is rare. It was first documented in a laboratory setting in 1989, according to Experimental Animals.

But the gerbils in that study were confined to the laboratory and not bred as pets. Since then, albino gerbils have still not been introduced to the pet trade.

Why Do Some Gerbils Have Red Eyes?

Red (or pink) eyes, and white fur, are both caused by genetic mutations. However, in gerbils, they are not the same mutations as the one that causes albinism.

The genetic mutation which causes albinism in animals is called “c” (which stands for color). The c mutation completely blocks the production of melanin in the skin, hair, and eyes.

It is recessive, which means that the animal must inherit two copies of it to be born albino. One copy comes from the mother, and one from the father.

White gerbils with red eyes do not have the c mutation. They look albino because of a mixture of different mutations, called c(chm), c(h) and pp.

Together, these mutations can create the outward appearance of albinism: white fur and pink or red eyes. PEW and REW gerbils aren’t true albinos, but they look the same.

Some REW gerbils develop a darker-colored tail as they get older. These are referred to as ‘dark-tailed whites.’ Pink-eyed whites stay white forever, but they are still not true albinos.

Are Gerbils with Red Eyes Blind?

True albinism can cause blindness, or poor vision, in many animal species. This happens because albinism results in the total absence of melanin.

Melanin is necessary for the proper development of various structures within the eye. Without it, the optic nerve, retina, iris, and eye musculature can be adversely affected. True albinism can also cause other impairments, such as deafness.

However, as we know, red-eyed and pink-eyed pet gerbils are not true albinos. Because of this, they do not experience the same negative consequences.

Gerbils can be blind, but blindness in gerbils is not related to their eye color. Gerbils can be born blind or become blind later in life for various reasons:

The gene that dilutes eye color in gerbils does not cause blindness. However, some gerbils with red and pink eyes may experience somewhat reduced vision.

How to Tell if a Gerbil is Blind

The lighter your gerbil’s eye color, the higher the chance that its vision will be impaired.

If your gerbil has dark red or ‘wine’ colored eyes, its vision probably isn’t impaired at all. But if it has light red or pink eyes, it might not be able to see quite as well as dark-eyed gerbils. It may have trouble focusing on objects or struggle with depth perception.

If this is the case for your gerbil, you may notice a behavior known as ‘swaying.’ This is when a gerbil stands on its hind legs and sways from side to side. This helps them to judge the distance to an object better.

Gerbils with reduced vision may also fall off objects in their gerbilarium, such as shelving or ladders. This is because they can misjudge how far away they are from the edge. But falling short distances onto soft bedding is unlikely to do any harm.

Most gerbils with impaired vision lead happy, fulfilling lives. They do not rely upon their sight, as their most important senses are hearing and smell.

It can be difficult to tell if a gerbil is completely blind. It will still greet you when it hears you coming, and it will find its way around using scent. Other gerbils won’t treat it any differently, either. If you’re unsure, visit a veterinarian for an examination.

Why Is My Gerbil Red Around Eyes?

Occasionally, regardless of your gerbil’s eye color, you may notice a reddish discharge around their eyes. This is caused by a substance called porphyrin. You’ll notice it more easily if your gerbil has light-colored fur.

Porphyrin is produced by your gerbil’s Harderian gland, located behind the eyes. The job of this gland is to secrete a fluid that provides many functions.

Porphyrin is essential for a gerbil’s health. But sometimes, the Harderian gland can produce too much of it. This is when problems can occur.

When your gerbil produces too much porphyrin, a reddish or pinkish discharge will surround its eyes and nose. It may seem as though your gerbil is crying blood, but this is not the case.

An excess of porphyrin isn’t an emergency, but it does suggest that something is wrong. It can be triggered by problems in your gerbil’s environment or poor health.

We already know that porphyrins are responsible for red-colored discharge in gerbils. But there are many reasons why your gerbil’s Harderian gland might be over-producing porphyrin.

Usually, it’s caused by something wrong with your gerbil’s physical or mental health. They may have an undiagnosed health condition or may be stressed. Here are the most common causes of gerbil red eye discharge:

If you don’t identify the culprit, the problem will worsen with time. Excess discharge can cause irritation and scratching, leading to sores, which may become infected.

How to Treat Red Eyes in Gerbils

To get rid of your gerbil’s red eye discharge, you’ll need to figure out what’s causing it. A process of elimination is the best method.

Use a hygrometer to measure the humidity in your gerbil’s environment. It should not exceed 50%. The temperature should be between 60 and 70 degrees Fahrenheit, with plenty of indirect sunlight.

Assess your gerbils’ diet. Each gerbil should receive a tablespoon of good quality gerbil food mix per day. You can supplement with occasional fruit, seeds, and mealworms for extra fiber and protein.

If you can’t identify any obvious environmental stressors, an underlying illness could be the culprit. If you suspect this, have your gerbil assessed by a gerbil-savvy veterinarian.

In the meantime, you can help your gerbil’s skin by cleaning it. Take a warm, damp cotton and carefully wipe it around your gerbil’s eyes and nose. Be gentle, and stop if your gerbil shows any signs of stress.