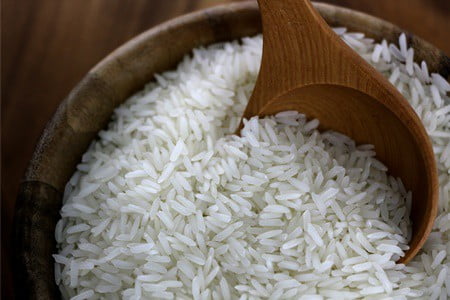 Gerbils can eat rice safely as it doesn’t contain anything toxic or poisonous to animals. Rice won’t harm your pet unless there’s something added to it, such as salt and oil.

Gerbils can eat rice that’s cooked or uncooked, brown or white, puffed rice/rice crispies, and rice cakes. Rice is high in carbohydrates. Uncooked rice does not expand in the stomach when eaten. Due to its high-calorie content and lack of vitamins and minerals, rice should only be fed to gerbils once per week.

Plain boiled rice is most healthy for gerbils. Rice that has been fried will contain added oils, and some rice products have added sugar or salt. This could lead to weight gain.

Is Rice Safe for Gerbils?

Cooked and uncooked rice are OK for gerbils to eat. However, it doesn’t contain many vitamins and minerals. It’s commonly referred to as empty calories.

Also, rice hardly contains any fat and protein. While gerbils do need more carbs than protein and fat, rice doesn’t contain enough of either of them. Your gerbils should only eat rice as a snack.

Gerbils can eat cooked rice with no complications. There are exceptions, though. You shouldn’t offer fried rice to your gerbil, because it’s fried in oil. Gerbils shouldn’t eat foods that are high in fat and will gain weight.

Also, if anything has been added to the rice, it may not be suitable. This depends on what was added. But plain boiled rice is fine.

Rice is high in carbohydrates, which is good for your gerbil. Gerbils need lots of carbs. Brown rice contains lots of fiber, too. Your gerbil needs fiber to keep its digestive system running smoothly.

Gerbils can eat uncooked rice. It won’t expand in the stomach. Uncooked rice is as nutritious as cooked rice. The only difference is water and any seasonings that you add.

One advantage of feeding uncooked rice is that it’s hard and tough. Gerbils benefit from eating foods like these because it keeps their teeth sharp and short. They also enjoy the texture.

Rice Krispies cereal and the various other similar brands are all safe for gerbils to eat. These cereals are made from puffed rice.

There are several issues with puffed rice. Most recipes add sugar and salt, for example, which is bad. They also have the same lack of vitamins and minerals, unless these have been added during manufacture.

While they are crispy and crunchy, they aren’t so in a way that will be beneficial for your gerbil’s teeth. You should stick to other forms of rice if you want to give your gerbil a snack.

Again, rice cakes usually have something added to them, e.g. with cheese flavoring. Others have lots of added salt. It’s not fully understood how these flavorings would affect your gerbil (although they would likely be fine).

According to the South China Morning Post, there’s another kind of food called ‘rice cakes’. Authentic Chinese rice cakes are solid and dense and are cooked in a different way. These are safe to feed to a gerbil, too, provided that they’re cooked plain.

Does Rice Expand When Eaten?

There is a myth that rice expands when eaten. People say that you shouldn’t feed uncooked rice to pets or wild animals because it gets bigger and explodes the animal’s stomach.

This isn’t true. Rice only expands when it absorbs water. But when it absorbs the water and gets bigger, there is less water than there was before, so the space it takes up isn’t any more than the rice and water put together.

So, you can put one cup of rice and one cup of water in a bowl. When the rice absorbs the water, there will be two cups-worth of rice. So, it won’t overflow or break the bowl. The volume stays the same.

There’s also no issue with cooked rice expanding. Cooked rice has already absorbed water anyway, so it won’t get any bigger.

Is Rice Good for Gerbils?

Rice is a reasonably healthy snack food for gerbils. There’s little chance that your pet will get fat from eating too much unless you overfeed it. But it doesn’t contain many vitamins and minerals, which is bad.

These benefits mean that rice makes a good snack. But that doesn’t mean you should feed your gerbil rice all the time, or in large amounts.

How Many Calories Does Rice Have?

One drawback of rice is that it contains lots of calories. The amount that’s in a serving depends on whether you feed cooked or uncooked rice.

Uncooked white rice contains around 360 calories per 100g. Brown rice has more fiber but contains roughly the same amount of calories. If you feed your gerbil uncooked rice, be careful to only offer a small amount.

Cooked rice has fewer calories. That’s because the rice absorbs water, effectively diluting the rice. So, 100g of cooked white rice contains only around 130 calories. 100G of cooked brown rice is around 120 calories.

Protein, Fat, and Carbohydrate in Rice

Rice has no fat content whatsoever. It’s a kind of grain, and grains are almost pure carbohydrate. There is some protein, but not much. Here’s a table with info from Nutrition Value about cooked white rice:

It’s good that rice doesn’t have any pure sugars in it. This means that your gerbil has to digest the carbohydrates before their energy can be released. So, rice won’t cause an instant sugar hit, and won’t cause diabetes.

Some diets suggest that you shouldn’t eat lots of carbs. But gerbils need carbohydrates to function.

The issue is that rice doesn’t have enough fat or protein. Gerbils need to get around 80% of their calories from carbs, 15% from protein, and 5% from fat. Rice has too many carbohydrates and not enough fat/protein.

If the rice is a snack, this won’t be a problem. Your gerbil will get its fat and protein from elsewhere.

Vitamins and Minerals in Rice

Rice doesn’t contain lots of vitamins and minerals. It certainly doesn’t contain many when compared with its calorie count. Your pet would have to eat enough rice to get fat to also get enough micronutrients.

Rice isn’t devoid of vitamins and minerals, though. Here’s a table with info from Nutrition Value, showing what plain white boiled rice contains:

These are reasonable amounts of each micronutrient. Magnesium is especially important. Gerbils need it for brain health, e.g. to prevent seizures. Rice contains some magnesium, but not lots.

How Much Rice Can Gerbils Eat?

Gerbils can’t eat lots of rice. It’s too calorific, doesn’t have certain vitamins and minerals that gerbils need, and doesn’t have enough fat and protein.

If you do want to feed your gerbil rice as a snack, only give it a few grains at a time (four or five). Feed these grains alongside your gerbil’s normal food.

How Often Should Gerbils Eat Rice?

Limit your gerbils to one serving per week. Gerbils don’t need snacks anyway. Your gerbil will be happy eating its food mix. This already contains a variety of things to keep your gerbil interested, and perhaps some rice or puffed rice.