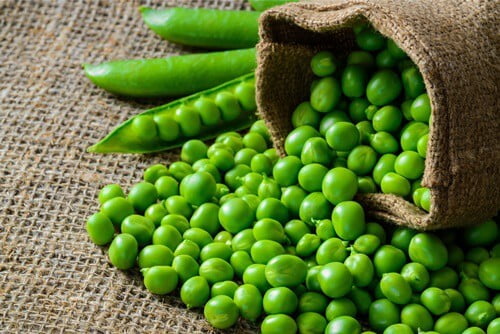 Gerbils need healthy and nutritious food, or they can become sick. Vegetables like peas have a reputation for being healthy, so you may want to introduce them to your gerbil’s diet.

Peas aren’t bad for gerbils but lack the nutrients to be a staple food. They are full of vitamin C, but gerbils don’t need it. They also lack protein and fat, which a gerbil’s health depends on. Peas contain vitamins A, B1, and K, plus copper, zinc, manganese, and iron, so they are a healthy snack.

You can feed peas to gerbils once or twice a week at most. The rest of your pet’s diet should be a gerbil food mix. Below is a guide on which kinds of peas (frozen, raw, or cooked) you can feed to gerbils and how much they can be safely fed.

Fresh peas grow in pea pods, and they aren’t poisonous to gerbils in any way.

Cooked peas retain the taste and texture of raw peas. However, the taste is slightly weaker, and the texture is slightly softer. Neither of these factors means that your gerbil won’t eat them.

What is an issue is that cooking food, even for a brief time, changes its nutritional make-up. Cooking denatures proteins and breaks down carbohydrates, and in the case of peas, much of this ‘nutritional goodness’ is leached out into the water the peas are cooked in.

Cooked peas aren’t as good for gerbils as fresh peas. You’re better off feeding your gerbil fresh foods than cooked foods in almost all cases, except where there’s a potential risk of parasites. With peas, there isn’t, so stick to feeding gerbils fresh peas.

In the case of some brands, peas are frozen within an hour of picking, which means that they’re almost as fresh as you can get.

According to the Journal of Agricultural and Food Chemistry, fresh and frozen are nutritionally equal. Freezing food stops it from breaking down. This means that when peas are frozen so soon after being picked, they stay ‘fresh’ for a long time.

But don’t feed frozen peas to your gerbil when they’re still cold. To do so would be unappetizing. Instead, allow the peas to warm to room temperature without heating them in the microwave.

The brand doesn’t necessarily matter, so long as the peas are fresh. Some brands take longer to freeze their peas after picking. These would be less fresh, but they will still be edible and healthy.

The pea pod itself isn’t usually eaten as they’re tough and stringy. Snap peas, on the other hand, can be eaten whole. It doesn’t contain anything bitter, unhealthy, or toxic.

There are two ways in which you could feed your pet pea pods:

The former way is perhaps best because your gerbil has to work for its food. Your pet will find it fun to nibble its way into the pod to get at the peas inside.

Dried peas are what they sound like: peas that are dried over the course of two weeks or so. This makes them better for storage, as a dried pea can stay edible for around two years or so.

Before you eat dried peas, you have to rehydrate them. This means soaking them in a bowl of water, usually overnight. By the morning, the peas are a similar size, texture, and taste to fresh peas.

However, they aren’t too hard for a gerbil to eat. Gerbil teeth are made precisely for breaking up solid foods. Dried peas would be the ideal food for keeping your pet’s teeth in good shape.

The only issue is that dried peas don’t have as strong a smell as fresh peas. Your gerbil may not recognize them as food and won’t want to eat them.

Roasted peas are dry like dried peas and are a little hard too. But they’re more crunchy than solid. They share a similar nutritional profile to regular peas, although they aren’t quite as healthy as they may be sprayed with oil and salt.

The process of roasting doesn’t change the peas that much. Cooking by boiling is what makes vegetables less nutritious. Roasting hardly changes them at all, so the peas will still be almost as nutritional as they would be fresh.

They make an excellent snack and are often served with flavoring. Gerbils can eat them, but only if they’re made without this flavoring added. That’s because:

However, if the peas don’t have an added coating, they’re fine. They make a fun snack for gerbils because they’re crunchy.

Your gerbil shouldn’t eat peas as a core part of its diet. Peas are primarily water, but nutritionally, they are high in carbohydrates and little of anything else. Gerbils need a mixture of carbohydrates, protein, and fat to survive and be healthy.

According to Nutrition Value, peas are almost entirely water. Only 14% of the weight is carbohydrate, while only 5% is protein. Not even 1% by weight is fat content. This is not a good mixture because gerbils are fed around 15% protein in their food.

Instead, your gerbil should eat a gerbil food mix. This contains all different kinds of food, including grains, legumes, and dried vegetables. It contains the optimal amounts of protein and fat.

Health Benefits of Peas for Gerbils

Peas contain a variety of vitamins and minerals, which are good for humans. However, not all of the minerals that people need are needed by small animals.

Take vitamin C, for example. Vitamin C is regarded as one of the most important for people, and peas contain lots of it. 100g/3.5oz of peas contains 40-50% of your daily vitamin C requirements.

But gerbils don’t need vitamin C in their diets and don’t seem to experience ill effects without it. They don’t need Vitamin C in large amounts, and they may not even need any at all.

Aside from that, peas contain the following vitamins and minerals in reasonable amounts:

According to the National Academies Press, no studies have shown that gerbils need iron, copper, zinc, or manganese. The concentration of these minerals in peas is of little benefit to gerbils.

By contrast, peas don’t contain much that gerbils need. They don’t have much magnesium, for example. Magnesium is essential for gerbil brain health, and having lots of it can prevent seizures.

Peas also lack sodium chloride. A lack of sodium chloride produces alopecia. So, if you fed your pet nothing but peas, this would be a problem. That’s why peas should only be fed to your pet as a snack, i.e., as part of a balanced diet.

Are Peas Good for a Gerbil’s Teeth?

Gerbils need to eat food that helps to control their teeth growth. Like all rodents, gerbils have teeth that grow continually. Your pet needs to grind its teeth down on something. Normally, a chew toy will suffice. But having solid foods of a solid texture will help to an extent.

Peas don’t tick this box. They are soft, even when fresh. The skin of a pea may be slightly less tough when it’s fresh but not tough enough to help a gerbil with its teeth.

Peapods have a tough and stringy texture for gerbils to chew on. This gives your pet something to grind its teeth down on. However, you can’t get pea pods with frozen peas.

How Many Peas Should Gerbils Eat?

To take advantage of the nutritional benefits of peas, you can feed them to your pet occasionally. Only feed them as a snack rather than regular food, though.

Snacks should be fed irregularly. Once or twice a week at most is a good amount. To be clear, gerbils can and will eat peas more frequently than this. And any increases in frequency won’t cause weight gain, poisoning, or sickness.

The issue is that peas are empty calories. They offer some nutrition, but not as much as gerbils need, and they miss out on lots of crucial vitamins and minerals.

Put your gerbil on a controlled diet. Feed it gerbil food mix, following the instructions regarding frequency and volume. Once a week, take out half of this mix and replace it with peas.