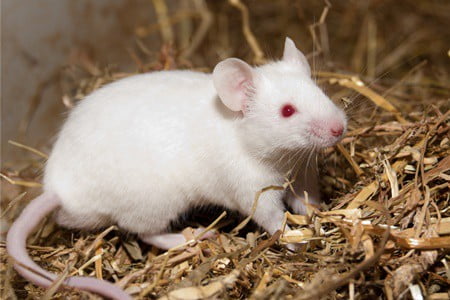 Gerbils and mice are small rodents kept as pets. Because they look similar and are roughly the same size, you may wonder if you can breed mice and gerbils together.

Gerbils and mice can’t breed because their genetics are different. They’re both rodents but are sufficiently different that they can’t interbreed. Only animals with similar genetics can produce viable offspring. Gerbils and mice will fight if kept together because they don’t get along, making mating impossible.

Millions of years ago, when gerbils and mice were genetically closer, they could have mated. The intervening millennia have meant that their genetic codes are too different to make that possible.

Can Gerbils Mate with Mice?

This raises a question. Because they seem so similar, can gerbils mate with mice? Unfortunately, they can’t. They can neither physically mate nor have babies together. If you put the two rodents together, they wouldn’t have babies. It’s more likely that they’d kill each other.

Could Gerbils and Mice Have Babies?

Hybrid animals are well known and have been for hundreds of years. A mule, for example, is the result of breeding a horse with a donkey. It’s also possible to breed donkeys with zebras, lions with tigers, and different dog breeds together.

However, no known cases of gerbils breeding with mice have been documented. It is theoretically possible, but the offspring would likely not be viable, i.e., it wouldn’t survive to full term and be born.

Even if it were born and could live, it may not be capable of passing on its genes. It would likely be infertile. That’s the case for many results of interbreeding, such as the mule.

According to The Tech Interactive (a Stanford service), mules can’t mate with each other and produce offspring, so the only ones that exist are from breeding donkeys and horses.

Why Can’t Gerbils and Mice Interbreed?

The root of the issue is that gerbils and mice are not the same species. The idea of a ‘species’ is related to the concept of breeding. Scientists define a species as any group of animals that can interbreed to produce viable, fertile offspring.

That’s why dogs, despite coming in many different ‘breeds,’ are all considered the same species. They could all interbreed, even if it would be physically difficult to do so. But this doesn’t answer the question of why two similar species can’t interbreed.

They Don’t Want To Breed Together

For two animals to breed, one (if it could overpower the other) or both have to want to. This could never happen with gerbils and mice.

Several things attract one animal to another. One is the pheromone, which is a kind of chemical that animals give off. According to LiveScience, their purpose is to show off an animal’s genetics. It’s to tell the potential mate that the male is strong or that the female is fertile.

Crucially, these pheromones only work on animals of the same species. So, even if your gerbil were exceptionally strong or fertile, its pheromones wouldn’t appeal to the mouse. The same applies in reverse.

Besides that, animals convince each other to mate through impressive displays. Colorful fur or feathers, dances, chasing, and more by a male can all show a female that it’s strong and worthy of mating.

This doesn’t apply to rodents. This means that neither the gerbil nor the mouse can impress the other so that mating will take place. If neither animal wants to mate with the other, then it won’t happen.

When two animals mate, they combine their genetic material. The sperm and egg are brought together, and the resulting offspring gets half of its genes from its mother and the other half from its father.

To achieve this, the genes are put together almost like a zipper. Then, depending on which genes are dominant and which recessive, some will become features of the offspring.

However, there are several reasons why you can’t combine the genetic material of different animals, at least not wholly as in the above scenario. The first is that according to the USNLM, each animal has a different length of the genome (DNA). This means that they won’t line up correctly, and the ‘zipper’ will come undone.

It is possible in a lab to take snippets of genes and replace them with those from other animals. That’s what genetically modified organisms are. So, it would be possible to take genetics from a mouse and put it into a gerbil’s genetics. But only if you run a laboratory.

Gerbils and mice are only part of the same order (the order of rodentia) and are not the same species. Their last common ancestor will have been millions of years ago. This means they long ago stopped interbreeding successfully.

Evolution works by creating tiny changes. Over time, two members of the same species become ever so slightly different because of environmental pressures. These changes eventually become bigger and bigger until the two species are distinct.

This usually happens because of geographical distance and environmental change. Gerbils became adapted to the dry grasslands and deserts of Mongolia and nearby, while mice never did. Instead, mice prefer places like fields.

There is no hard-and-fast line which means that a novel species is sufficiently different from its ancestor so that the two can’t mate. But what’s clear is that mice and gerbils have long ago passed the point at which they could still interbreed.

To illustrate how far apart they are, even rats and mice can’t interbreed. Despite appearing so similar and living in the same places, the two can’t breed with each other. So gerbils and mice certainly can’t.

Gerbils Are Bigger than Mice

Biological issues aren’t the only reasons mice and gerbils can’t breed. Physical differences get in the way too. Regular pet mice measure approximately 6 inches from their noses to the tips of their tails. Gerbils are significantly bigger, at about 8 to 10 inches long.

The difference may only seem small to us, but it means that gerbils can be between 30 to 60% bigger than mice. On a small scale, such a small difference becomes a lot more important.

This size difference makes it difficult for a gerbil and a mouse to mate. With one partner much bigger than the other, mating would be physically impossible. Consider the difference between certain breeds of dog, which you cannot easily breed together. The same problem applies here.

Can Gerbils Live with Mice?

This might surprise you, as gerbils are social creatures. They enjoy living in pairs, and their offspring live with them for months. They communicate with each other through squeaks and are sad if they live alone.

But they can’t live with other species. Your gerbil will recognize that the mouse is a different species and will try to fight it off. At the same time, the mouse will try to fight off your gerbil. Because they’re in a confined location, they could even kill each other.

This is a natural reaction to being near another species. That’s because the only thing an animal cares about is securing resources for itself, its group, and its offspring. Having another animal of another species compete for the same food would make it less likely to survive.

What makes it worse is the size difference between the two. When one animal is much bigger than the other, it usually begins bullying the other.

So, there are many reasons why gerbils can’t breed with mice. If you put them together, it would be more likely that the two would attack each other.