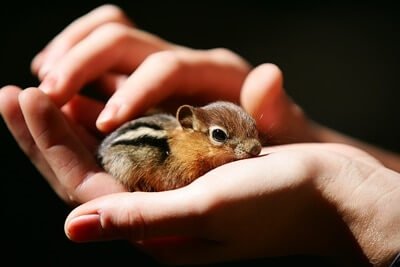 Pets provide companionship, cheering us up when we’re lonely or sad. However, many small pets are nocturnal, meaning they sleep during the day when you’re most likely to want to play with them.

Suitable small pets that are diurnal include guinea pigs and degus. Gerbils and rabbits are more active during the twilight hours. However, in captivity, their sleeping patterns become more attuned to their owners’ night-time sleeping schedule.

Small nocturnal animals will always stay this way. However, many pets get used to sleeping more at night after settling into their new home.

What Does Nocturnal Mean?

Nocturnal describes animals that are most active at night. Most nocturnal animals, including those that live in the desert, sleep at night to escape the heat.

There are also fewer predators at night in the regions nocturnal animals live, making it safer for them to forage for food under cover of darkness, which protects them.

What Does Diurnal Mean?

As previously mentioned, diurnal simply means that animals are more active during the day. They either sleep at night or take periods of inactivity and rest when it’s dark.

As described by Science Direct, some animals are diurnal because their eyesight is at the most reliable during the day. In other words, their vision isn’t adapted to see in the dark.

Crepuscular animals are less common than nocturnal and diurnal creatures. It means they’re most active during twilight, which is the period between daylight and darkness. This can be after sunset or before sunrise.

Animals are crepuscular and active between dawn and dusk because it’s safer for them, and they can avoid predators more easily. Most predators are active during daylight or night-time, resting at twilight.

Rodents that are crepuscular in the wild mostly retain this sleeping pattern in captivity, though it is adaptable.

Small Pets That Are Active During The Day

If you’re looking for a choice of small animals and pet rodents that are not nocturnal, you’ll do well with one of the following animals.

Their sleep schedules will allow you to play with them during the day without messing up their natural routine.

Do Gerbils Sleep At Night?

According to Physiology and Behavior, captive gerbils are crepuscular and more active at the transitions between light and dark.

However, they’re different from most rodents because they sleep for 6 hours during the day and 6 hours at night, making them just as active when it’s light and dark. They’re also less smelly than other rodent pets.

If you’re looking for a pet that’s not nocturnal, gerbils are ideal because you’ll get 6 hours of daylight to play with them. It’s also thought that because gerbils are inquisitive and curious creatures, they prefer to be awake during the day when more is going on.

As a result, there’s an opportunity to encourage your gerbil to stay awake for longer throughout the day and sleep during the night, matching your sleep cycle more closely.

When choosing a living space for a pet gerbil, select a room that lets in natural light to allow gerbils to wake when the sun rises. If your gerbils do awaken during the night, here are some tips to keep them quiet.

Do Guinea Pigs Sleep in The Dark?

According to the American Veterinary Medical Association, guinea pigs are likely to be awake throughout most of the day, meaning they’re diurnal. This is relatively rare for small rodents and is why guineas are popular pets for families with young children.

Guinea pigs only sleep for around 4-6 hours a night. They also prefer to take short naps whenever they’re tired, so many owners don’t always notice their pets sleeping and mistake them for being awake all the time.

A guinea pig’s sleep schedule has adapted to living in captivity with human caregivers. When humans feed and play with guinea pigs through the day, they’ve naturally evolved to stay awake for these interactions.

Guinea pigs go through bursts of activity during the day, followed by short periods of restfulness, allowing them to conserve their energy more effectively.

However, these periods are longer at night, when guineas go into the REM stage of sleep. This sleep is essential for their brain and body restoration.

At night, they’re far less likely to be disturbed than in the day, which is why they enter a deeper sleep when the rest of the family are resting.

What Hours Are Rabbits Awake?

There’s a misconception that rabbits are nocturnal, but that’s not true. Like gerbils, rabbits are crepuscular. They’re most likely to be at their most active at twilight, in between light and day.

This is primarily because rabbits are prey animals in the wild. Wild rabbits rarely live beyond 12 months and suffer from a 90% mortality rate.

Captive rabbits don’t need to worry about predators, as owners keep them in safe hutches. However, they’ve retained this crepuscular sleeping instinct.

Domestic rabbits also differ from wild rabbits, so their sleep patterns can be adapted to suit their caregiver’s needs. This is even more possible when you stick to a regular daily feeding schedule. However, you mustn’t wake your rabbit while it’s sleeping, as you could cause stress and anxiety.

On warm, sunny days, rabbits are more than happy to hop around in their run during the daytime, giving them a chance to exercise and get a break from their cage.

Degus aren’t the most common pet, but they’re diurnal, making them excellent daytime companions. Degus are related to chinchillas and guinea pigs. Although, studies suggest they may be more closely related to rabbits.

In the wild, degus live in colonies of approximately 100 rodents in underground burrows containing tunnels and food stores.

Because they live in such large groups, degus enjoy busy, active homes and thrive with constant human interaction. They’re also continually looking for things to do and can be noisy and disruptive when they’re awake during the day.

However, a degu’s sleeping pattern naturally aligns with ours, making them better pets than nocturnal animals to house in a bedroom or small apartment, as they’re less likely to disturb you.

As a result, owners must provide their pet degu with plenty of toys and climbing things to keep them entertained. Rodent wheels are an excellent addition to their enclosure, as are obstacles. Alternatively, get your degu out and play with it in an animal-proofed room.

Do Chipmunks Sleep At Night?

Chipmunks have only really started to be considered a pet in recent years, but they adapt well to captivity and are easy to tame, making them popular.

Chipmunks are also diurnal, so they’re active in daylight hours. Their eyesight and senses aren’t adapted well to see in the dark, making them vulnerable to predators at night.

They have fewer rods than cones in their eyes, meaning they’re better for brighter lights. A chipmunk’s eyes are also smaller with rounded pupils, so they don’t keep out the light very well.

Chipmunks are highly active animals, so they need plenty of space to play and run around. They also require branches and foliage, allowing them to climb and hide, particularly when settling into their new home.

As natural foragers, chipmunks enjoy a varied diet of fruit, nuts, berries, insects, and grubs. They do well on normal hamster feed, but need these treats incorporated into their diet to keep them healthy and mentally stimulated.

All of these small animals make good pets, especially if you’ve got plenty of time throughout the day to play. While you shouldn’t attempt to change their natural sleeping patterns too much, you can encourage them to remain awake for long enough for you to enjoy their company. With guinea pigs and degus, in particular, this won’t be a problem.