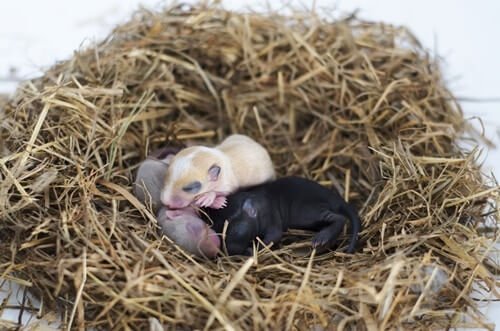 Baby gerbils (pups) are easy to care for in captivity. The size of a litter varies but is usually between 3 and 6. The mother will look after these pups on her own throughout their development.

The mother performs most aspects of baby gerbil care. Initially, pups only drink their mother’s milk. They’ll begin eating when they wean at 5 weeks old. Baby gerbils will become malnourished if they’re underfed. Line the gerbilarium with a substrate, provide a water bottle, hide, wood to chew on, and safe toys.

Babies are cared for by the father and mother. According to Hormones and Behavior, male gerbil fathers show high levels of parental behavior toward their pups due to hormonal changes.

Baby gerbils live in the same gerbilarium as their parents. They may eventually want to move out into their own space, in which case you will need to provide a second gerbilarium.

What Baby Gerbils Need in Their Cage

When the babies move out, they will have the same needs as adults. Their new enclosure will be no different from their old one. They will need the following:

Put a food bowl in your gerbil’s enclosure. Gerbils are natural foragers. It’s better for their well-being if they have to dig and forage for their food.

So, scatter food across the substrate of their enclosure instead. Food bowls are also bad for gerbils because they encourage fighting. With food in one specific place, the gerbils will push their way to try and get to it. Scattering food avoids this.

Gerbils come from a part of the world where there’s precious little water, like a desert. This has made them very good at conserving water, much of which they find in their food in the wild.

However, gerbils will benefit from having a water bottle in their enclosure. Your gerbil babies won’t have any needs that regular adult gerbils don’t.

When a gerbil is born, it needs to feed on its mother’s milk. It isn’t ready for solid food yet. If the mother has enough nipples for every pup, they may all feed at the same time.

Weaning occurs around 5 weeks after birth. The mother will begin rejecting her babies when they come to it for milk. The babies will eventually start solely eating solid food.

After weaning, you can start feeding your baby gerbils solid food. The ideal solid food is gerbil food mix, like Supreme Gerri brand. It contains these ingredients:

These ingredients offer the same nutrients as a gerbil’s wild diet and are perfect for your captive pets. Don’t offer food in a food bowl, as this encourages the gerbils to fight for space. Instead, sprinkle it evenly over the entire gerbilarium.

Young gerbils are capable of finding and eating food for themselves. All gerbils are foragers, meaning that they enjoy digging for food. Your baby gerbils will dig around in the substrate of their enclosure in search of food items. There is no need for you to hand feed your baby gerbils.

Can You Keep Baby Gerbils Alone?

One issue that people are aware of is that mother gerbils can eat their young. This behavior is common in rodents. You might think you have to keep them separated.

In the wild, a mother can only produce milk for a certain amount of babies. If there are too many, all of the babies will be undernourished. Survival of the fittest preferred mothers, so they’ll kill one of their young rather than allow all of her young to be underfed.

There are three reasons why baby gerbils can’t be left alone:

Gerbils do communicate. Some of their communication is ‘ultrasonic,’ i.e., we can’t hear it. According to PLoS One, baby gerbils frequently communicate this way with their parents. So, even though there’s a chance that the mother will eat her babies, you can’t keep the babies separately.

Can You Handle Baby Gerbils?

There’s a belief that if you do handle baby gerbils, the mother will reject its young because they smell like people. This is untrue for gerbils.

The only reason you shouldn’t handle baby gerbils is if the pup or parents seem anxious. If the parents become defensive, don’t force the issue. Allow both parent and pup to get used to the idea.

There is no limit regarding how early you can handle baby gerbils. You can handle them within the first week of their life, provided that your gerbil family is comfortable with that. The benefits of handling a gerbil baby include:

Be careful when you handle the pups. Move slowly and don’t squeeze them. They can’t see, so be careful not to surprise them. Cup your hands so that the pups can’t scurry away and fall.

Be careful when handling pups soon after they open their eyes. They aren’t used to their newfound sight yet. They will likely think you are a big predator coming to eat them. Allow them to get used to the sight of you before picking them up again.

If you do want to handle the babies, wash your hands before and after. While the mother won’t reject them if they smell like you, you may have other smells on your hands like perfume. Wash your hands after any time you handle or touch a pet.

Can Baby Gerbils Get Sick?

Neither adult gerbils nor their pups get sick easily. This is a result of the conditions they’re kept in. In a dedicated gerbilarium, gerbils are prevented from coming into contact with gerbils outside of their family. This prevents the spread of germs.

It also prevents parasites. Parasites are caught in one of two ways. They can be caught from direct contact with other gerbils or feces. Or, they can be eaten in food. That’s how many meat-eating animals catch parasites. Gerbils avoid parasites altogether.

Also, if the conditions in their enclosure are clean, there’s no risk of infections. If they get a cut or scrape, they could become infected. To avoid this occurring, clean your gerbils’ enclosure regularly.

There are only two ways that baby gerbils can get sick.

Baby gerbils can be underfed. This can occur because the mother cannot produce enough milk for all her babies. You will only see this happen with large litters of ten or more. As discussed, the mother may kill one of its weaker babies if this is the case.

The mother won’t produce enough milk if it’s underfed itself. Gerbils have hardly any fat reserves compared to other animals. They evolved that way because they live in places with few fatty foods to sustain them.

The issue is that milk is made from stored fat. So, if the female doesn’t have much fat, it won’t produce much milk either.

If one of the babies is underfed, the issue will continue to get worse. It’s the same with any animal which has large litters. If one is born small, it will struggle to push its siblings out of the way to access food, milk, or otherwise.

That means that a small gerbil will grow slower than its larger counterparts. Over time, it becomes more and more underfed. It may die if it still can’t access any food.

Respiratory infections are like colds. They affect gerbils in the same way as they affect people. Your gerbil’s nose will get runny, it will sneeze, and it won’t be as active as usual.

In adult gerbils, this usually isn’t a big problem. That’s because adults are big and strong enough to fight the infection off. You won’t need to take your pet to a vet, as they will get better on their own.

However, babies are smaller and more vulnerable. You have to prevent them from getting respiratory infections. The easiest way is to keep your gerbil’s enclosure clean is by replacing the substrate regularly and wiping it with an antibacterial spray.

Other than that, there’s only so much you can do to prevent a gerbil from getting sick. It’s impossible to prevent any animal from ever being sick, so don’t be too harsh on yourself if one of the babies gets a cold. It should survive anyway.

Baby gerbils develop far quicker than the young of many other pets. You have to adjust what care you give baby gerbils every week.

Baby gerbils are tiny. Pups are about half an inch long at most. They are blind and their ears are closed, meaning they can’t hear either.

In the first week, all the pups will huddle together with their mother to keep warm. They need to because pups don’t have a coat. Over the course of the first week, each gerbil will grow its first coat of soft, downy fur.

At this stage, there’s little you have to do for the babies. Provide adequate temperatures for the litter and that there’s food available for the mother. Other than that, you can leave the litter alone.

Your baby gerbil’s coat will grow in by ten days. They will begin moving away from their mother and exploring, although they will still be blind.

You can handle pups before this point, but it’s ideal to wait until week two. That’s because the pups are becoming more mobile and more confident in their surroundings. Before that, they will want to spend most of their time next to their mother/parents.

Don’t leave anything in their cage where a baby gerbil could become trapped. This may mean you have to remove certain things from their gerbilarium. This is the perfect time for pups to injure themselves because they start moving around but still can’t see.

Week three is when your baby gerbils will start to open their eyes. They will open their eyes one at a time. They usually open their second eye the day after they open the first. Seeing allows them to become even more independent, and they will explore their surroundings more.

This is the point at which the babies will begin weaning. Weaning means that they stop drinking their mother’s milk. Weaning is a gradual process, not something that occurs immediately.

So, at this time, you will notice the babies trying to gnaw on their parents’ gerbil mix. Encourage them by putting more mix than usual. They are learning to use their teeth for the first time. Before long, they will need to eat it.

During week four, another sense becomes available to the baby gerbils: that of hearing. Their ears will open, so they can both see and hear. According to PLoS One, gerbils calculate where they are, what’s around them, and where to go from figuring out where noises are coming from (just like we can).

Again, this allows them to become more mobile. They will be more independent than ever. If you notice the babies interacting, don’t worry. They are likely only playing. This is a vital stage of development because gerbils live together in big groups and need to learn how to get along.

By week five, even the smallest of your gerbil’s young will be weaned, i.e., eating solid food. The gerbils will not yet be full adult size but won’t be far off.

At the end of this week, the gerbils are ready to search for their own food and live in their own group away from their mother. You don’t have to force this to happen. However, you may wish to provide a separate gerbilarium with access to your existing one.

This will allow the young to choose whether they wish to stay living in the same place or move out. Only manually move the gerbils from their first home if they constantly fight, both with their parents and with one another.