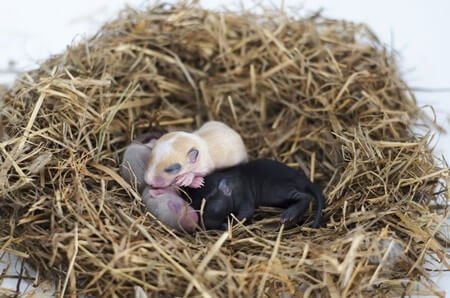 Gerbil pregnancies are short and easy to miss. So, if you’ve woken up one morning to a litter of unexpected gerbil pups, you’re not alone.

If your gerbil has had babies, keep the cage somewhere warm and quiet. Give the mother extra food, water, and bedding. When the pups are 1 week old, start handling them. They will begin weaning during week 3, so provide a low food dish and water bottle. Separate them into opposite gender groups by week 9.

We’ll explain what to do if your gerbil gives birth unexpectedly. You’ll then learn how to care for the pups, feed, and handle them. You’ll also find out what to do with baby gerbils once they’re weaned.

Is My Gerbil Having Babies?

Surprise litters of baby gerbils are not uncommon. The more gerbils you have, the more likely it’ll occur. Gerbils are notoriously difficult to sex. Even pet store employees and breeders get it wrong. Male and female gerbils look almost identical. So, you may think you have a pair of girls (or boys), but you may be wrong.

A female gerbil can become pregnant as early as 9 weeks old. She only needs a few minutes with a male to become pregnant. Gerbils come into heat regularly and almost always conceive the first time they mate. If your gerbil is pregnant, you may have noticed the following signs:

However, unless you have experienced a gerbil pregnancy before, you may not notice any signs at all.

Gerbil pregnancies are short and hard to detect. According to Laboratory Animals, some pregnancies are only 25 days long. Gerbils do not become visibly swollen until a day or two before giving birth.

Most owners will not notice the pregnancy at all until the babies have been born.

How to Tell If Your Gerbil Is in Labor

The signs that your gerbil will soon give birth begin 1-2 days before the event occurs. You will notice:

Gerbils give birth quickly and quietly, inside or near the nest. Each pup will be less than an inch long, pink, and hairless. The litter may consist of one to ten pups, with the average being 3-6.

Labor usually happens in the early hours of the morning. You will most likely be asleep in bed while your gerbil is having her babies.

If you are lucky enough to witness the birth, don’t interfere. Your gerbil won’t need any help from you. She’ll be anxious and keeping watch for predators, so leave her alone to avoid stressing her out.

The moment she’s finished delivering the last pup, the mother will go into heat. If a male gerbil is in the cage with her, she’ll mate and become pregnant again immediately.

So, if you suspect your gerbil is about to have babies, remove the male gerbil from the cage. Otherwise, you’ll end up with a second litter of pups a few weeks later.

What To Do if Your Gerbils Have Had Babies

Most gerbil owners end up with surprise pups at some point. They’ll wake up one morning to the sound of squeaking and a nest full of baby gerbils.

If you knew that your gerbil was pregnant, you’d have been looking forward to this moment. If not, it will have come as a shock. But whether you were prepared or not, you now have gerbil babies to care for.

You’re probably wondering what to do when your gerbil has babies. Although it might seem overwhelming, caring for gerbil pups is fairly straightforward. Gerbil mothers do a fantastic job on their own.

Newborn gerbils can’t regulate their body temperatures, so they can quickly become too cold. According to Comparative Biochemistry, adult gerbils can alter their metabolism to help them survive in extremely low temperatures. But pups can’t do this.

Baby gerbils keep warm by huddling together in a nest, which the mother makes before going into labor. It’s your responsibility to ensure that the gerbilarium isn’t too cold or hot.

The ideal temperature for gerbils is between 65 and 75 degrees Fahrenheit. Keep the gerbilarium somewhere in the middle of this range.

For extra warmth, keep the cage covered with a blanket, away from drafts and windows. But keep it out of direct sunlight, too, as this could cause the tank to overheat.

Don’t make too much noise around the gerbilarium. Baby gerbils can’t hear until week four, but the mother will appreciate some privacy and quiet.

In the first week of the pups’ life, avoid cleaning out the gerbilarium or moving anything around inside. Don’t handle the mother or touch the babies unnecessarily. This could cause stress, which may cause the mother to neglect her pups.

2/ Give the Mother Extra Food and Water

Gerbils that have recently given birth require extra food and water. This helps them to get their strength back, regain lost nutrients, and produce milk for the pups.

Ideally, gerbils should be put on a higher-calorie diet from the moment you know they’re pregnant. Of course, if the pregnancy went undetected, this isn’t possible. So it’s crucial to ensure the mother is fed well post-birth.

If the mother doesn’t get enough calories during this time, she may resort to eating her babies. Give her at least an extra teaspoonful of gerbil food per day. Alongside this, offer daily high-calorie treats.

Regularly check that she’s got enough water, and top up the bottle whenever necessary.

During the first few weeks of a baby gerbil’s life, they’re extremely vulnerable. They are blind, deaf, fragile, and easily hurt. They depend entirely on their mother (and you).

Gerbils are good mothers, and they usually do a great job of taking care of their babies. It’s not likely that you’ll need to intervene but check on the pups as often as you can.

Try not to disturb them as you do so. Keep light and noise levels low, and don’t touch the pups unless you have to. Check that each gerbil pup:

If you are concerned about any of the babies, telephone your veterinarian for advice. They may guide you over the phone or ask you to bring the gerbils for an examination.

There’s a small chance that one or more of the pups may not survive. If this happens, remove any dead pups immediately and dispose of them safely.

In the babies’ first week of life, you shouldn’t handle them or touch them unless necessary. This is because:

During the first week, only pick up a pup if it’s in immediate danger. For example, if it has fallen out of the nest and the mother gerbil doesn’t put it back.

From week two onwards, it’s safe to start handling the pups, but you must be gentle. Use a scooping motion to pick them up rather than grabbing them from above. Reaching from above can cause panic, as gerbils may mistake you for an aerial predator.

Hold each baby one at a time. Keep them low to the ground and held over something soft, like a cushion. That way, if they fall from your hands, they won’t be hurt.

Handle the pups regularly, at least once a day. This will help to socialize them and get them used to human interaction. But don’t keep them away from the nest for too long, as their mother may become anxious.

5/ Wean the Babies onto Solids

From week three onwards, the pups will be more independent and will start exploring solid food. Solid food won’t form the basis of their diet quite yet, though. They’ll still drink their mother’s milk until they’re fully weaned at 5-6 weeks of age.

You don’t need to give gerbil pups any special kind of food. They can eat the same diet as their mother. If they’re struggling to chew a larger piece of food, you can cut it up for them.

The pups will also appreciate the occasional treat, such as sunflower seeds and pieces of unsalted peanut. Don’t worry about baby gerbils becoming overweight, as the extra calories will help them grow.

By week three, you should also attach a water bottle for the babies to drink from. Affix it close to the floor of the cage so that they can reach it. Don’t use a water bowl or dish, as the babies could fall in and drown.

6/ Separate the Pups by Week Nine

Your baby gerbils will develop rapidly as the weeks pass. Gerbil pups grow quickly, and you may be surprised by how quickly they reach independence. By their fourth week of life, your gerbil pups will:

Around five to six weeks of age, the babies will stop suckling and be fully weaned. At this point, they’re old enough to live independently, and you can separate them from their mother.

Why Has My Baby Gerbil Died?

Raising baby gerbils doesn’t always go to plan. Gerbil pups are fragile, and they don’t always thrive as well as we’d hope. That’s why gerbils have so many babies and such frequent litters.

Sometimes, one or more of the gerbils in the litter will die unexpectedly. This is most likely to happen soon after birth. If you raise many litters, you’ll likely experience baby gerbils dying at some point.

There are many reasons that a gerbil baby might pass away. It doesn’t usually mean you’ve done anything wrong. For example, the pup may have:

There’s also a chance that there were too many gerbil pups for the mother to feed. If there were more than 6 pups, this may be the case. Gerbil mothers often can’t produce enough milk to sustain large litters.

If one of the babies dies, don’t be hard on yourself; it happens in nature all the time. But keep a close eye on the others, and take them to a veterinarian if you’re worried.

What to Do with Baby Gerbils after Weaning

After six short weeks, all of your gerbil pups will have been weaned. They’ll be covered in fur, eating solid food, and spending most of their time outside the nest. This time will fly by, and you’ll soon wonder: what do I do with the pups now?

Depending on the litter size and how much space you have, you may decide to keep them all. But they shouldn’t all live in the same gerbilarium. This is for two main reasons:

All gerbil pups should be separated into same-sex pairings or trios by 9 weeks of age. This is the earliest that male and female gerbils can become sexually mature. They may still seem like babies, but they’re capable of having pups of their own at this point.

Sexing gerbils can be difficult, especially if you’ve never done it before. If you get it wrong, you will end up with more unexpected litters. To be on the safe side, ask your veterinarian for their opinion.

If you can’t keep all of the pups, it’s time to find new homes. You can advertise online or in local newspapers or take them to an animal shelter. Always rehome your gerbils in pairs, as they should never live alone.

Here’s some advice on how to care for baby gerbils.