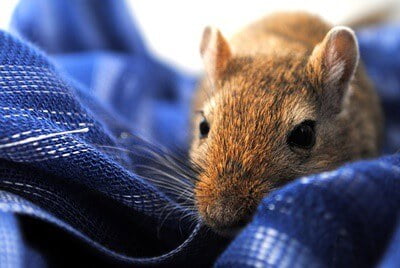 Gerbils are rodents, and rodents are one of the most intelligent small animals. Gerbils aren’t quite as clever as some other rodents, but they’re inquisitive creatures, eager learners, and good decision-makers.

Gerbils demonstrate intelligence through their complex social skills, spatial awareness, and excellent memories. Gerbils have a high learning capacity and can be taught tricks and skills. They can learn to associate a behavior with a reward, so you can toilet-train a gerbil and teach a gerbil to remember its way around a maze.

Because gerbils are so smart, they need mental stimulation. A gerbil’s intellect depends upon its genes and its upbringing. The more learning opportunities a gerbil is given, the smarter it will become.

Rodents are intelligent creatures. Scientists have been studying the intelligence of gerbils and other rodents for centuries. Their ability to learn, make associations, and recall previously learned behaviors is surprisingly good. Scientists even use gerbil studies as a model for human behavior.

When it comes to pet gerbil intelligence, we can get an idea of their cleverness by watching them go about the world. Gerbils are extremely curious, inquisitive, and love to explore – all signs of a bright animal.

Gerbils have a high learning capacity, and they get bored if under-stimulated. They enjoy puzzles such as ‘treat balls.’ Gerbils can learn to navigate mazes and will remember the way around, even at a later date.

Also, gerbils show surprising amounts of emotional and social intelligence. They are decidedly social creatures and can read other gerbils’ body language with ease. Gerbils can form close friendships and ‘argue’ with their playmates.

There are several different types of intelligence, so it’s hard to measure precisely how intelligent gerbils are. But by observing its behavior, you can get a good idea of how smart your own gerbil is.

There’s no simple test that can precisely pinpoint a gerbil’s intelligence (or any other animal). Because gerbils can’t read or write, they can’t answer questions, do sums, or solve riddles.

But according to Science, IQ tests have been developed for mice. These tests involve various tasks analyzing the rodent’s motor skills, memory capacity, and association. For example, you can teach a mouse to associate a certain sound with an electric shock. Certain rodents will learn this faster than others, and these are considered more intelligent.

Each gerbil has a thorough understanding of its own, and others’, place in the clan. Gerbils know who’s dominant and who’s subordinate and what their ranking allows them to do.

For example, a subordinate gerbil will know not to mate with a female if it’s not the dominant male. Gerbils can live with up to 14 others, and all clan members have unique relationships with one another.

Spatial intelligence can have many different meanings. In gerbils, it refers to their ability to solve navigational problems, judge distances accurately, and recognize objects. Gerbils have an impressive ability to find and remember their way around due to evolution.

In the wild, Mongolian gerbils spend most of their time underground in self-made burrows. These burrows are made up of networks of interlinked tunnel systems. According to the American College of Laboratory Animal Medicine, a single burrow may have up to 14 entrances.

Each gerbil in the clan must learn their way around, in, and out of the burrow. To do this, they require exceptional spatial awareness, navigational skills, and memory.

Gerbils are active, curious animals and spend most of their waking hours exploring their environment.  Pet gerbils can build complex tunnels in their bedding and navigate them with ease. They’re great judges of distance, too, and rarely miscalculate a jump.

You can test out your gerbil’s spatial intelligence and memory by creating a maze for it to run around. After having explored the maze a few times, your gerbil will quickly remember its way out. It’ll learn even faster if given a treat when it reaches the exit.

An animal’s intelligence is closely linked with its ability to learn and make decisions based on its past experiences. Gerbils can easily learn to associate certain behaviors with a consequence, which could be good or bad. They will then learn to repeat (or avoid) that behavior in the future, depending on the result.

This is called conditioning. Scientists first discovered rodents’ ability to learn through conditioning in 1938. A behaviorist called B. F. Skinner demonstrated that rats could learn to press a lever to dispense food. When pressing the lever resulted in an electric shock, the rats deliberately avoided the lever in the future.

Gerbils find it easy to learn behaviors this way, too. According to the FAA, gerbils were once trained to sniff out bombs in airports. They showed the ability to distinguish between different scents and press a lever when the odor was detected.

Unfortunately, this experiment never made it past the research stage. Gerbils were found to be too unreliable, as they can quickly become distracted.

You can test your own gerbil’s learning ability at home. For example, give your gerbil a treat whenever it touches its nose against the end of a pencil. Your gerbil will soon learn to follow the pencil around.

If an animal gets bored easily, this is a sure sign of intelligence. A clever mind craves mental stimulation to feel satisfied. According to the Journal of Personality and Social Psychology, high stimulation-seeking 3-year-olds grow up to have higher IQs.

Gerbils are extremely curious creatures and easily bored. When not eating or sleeping, gerbils constantly search for things to do. They enjoy mental stimulation and love exploring new textures, scents, and objects.

Observe your gerbil’s reaction when you put a new toy or structure into its cage. Chances are, it will immediately begin to investigate this new object, sniffing and climbing over it. When presented with a puzzle, such as a treat ball, a gerbil will persevere until it’s figured out.

If a gerbil is denied stimulation and has no outlet for its curiosity, its mental health will suffer. Bored gerbils demonstrate obsessive behaviors, such as bar-chewing and over-grooming. This can lead to health issues, such as broken teeth and bald patches.

Gerbils that live in an under-stimulating environment may also become depressed and lethargic. They may lose their appetite, leading to weight loss.

What’s the Most Intelligent Rodent?

The word ‘rodent’ refers to any animal in the scientific order Rodentia. Some of the most well-known rodents include rats, mice, gerbils, and hamsters. The order also includes capybaras, chipmunks, chinchillas, porcupines, squirrels, and beavers, among many others.

Rodents demonstrate advanced cognitive abilities, and some are more intelligent than others. However, rodents all have different brain structures and mental abilities. Each type of rodent is optimized for its unique way of life.

Because there are over 2,200 species of rodents in the world, it’s impossible to rank them all in order of intelligence. Many of them haven’t even been studied scientifically, so it wouldn’t be practical (or fair) to compare them.

But some rodents show extraordinary levels of intelligence in laboratory settings. Common rats (Rattus norvegicus) are widely considered the smartest rodent in the world. They have long memories, great problem-solving abilities, and learn skills exceptionally quickly.

Gerbils and mice are not far behind rats on the intelligence scale. Hamsters don’t appear to be quite as clever, but they can still be trained and taught some tricks.

Are Gerbils as Smart as Rats?

Gerbils and rats are similar in many ways. Both animals share similar levels of emotional and social intelligence. Rats and gerbils can both form bonds with their owners and form complex relationships with their own kind.

Rats also show similar levels of bodily and spatial intelligence. They can dig complex tunnels as well as gerbils and find their way around. Their great memories allow them to remember their way to and from food sources with ease. Rats surpass gerbils at their ability to climb and squeeze into tight spaces.

Rats and gerbils can both be taught tricks, but rats are faster learners. They can learn more complicated skills than gerbils. They also have longer attention spans, so they will take less time to learn and perfect a trick.

According to Current Biology, rats show a basic level of metacognition, which literally means “thinking about thinking.” Rats can reflect on their past experiences and weigh up the pros and cons of certain decisions. This is an ability that was previously thought unique to primates, including humans.

Gerbils don’t appear capable of metacognition. However, they haven’t been studied to the extent that rats have been.

Are Gerbils Smarter than Mice?

However, this theory was proved incorrect in 2014 by Frontiers in Systems Neuroscience. They studied the abilities of both rats and mice to:

The researchers found that both mice and rats achieved similarly high performance levels. Although rats were slightly quicker than mice, this was only an average measurement. Some individual mice were just as fast as rats. And mice were able to repeat the task after several hundred days without forgetting what to do.

No studies have yet compared gerbils and mice. But if mice have similar intelligence levels as rats, they’re likely more intelligent than gerbils.

We know that both mice and gerbils can learn to repeat behaviors in anticipation of reward. And as mice are similarly social creatures, they share similar levels of social and emotional awareness.

Are Gerbils Smarter than Hamsters?

Because hamsters and gerbils are both popular pets, they are frequently compared with each other. They’re both rodents of a similar size, but hamsters don’t compare to gerbils in terms of their intellect.

Hamsters are, for the most part, solitary creatures. Almost every hamster species naturally lives in isolation. They only interact with other hamsters to mate. Therefore, hamsters lack the complex social intelligence of gerbils. They can’t communicate as well with one another, and if housed together, will almost always fight.

Hamsters can dig simple tunnels, but not large, complicated burrows. They can find their way around, but their spatial memories aren’t quite as good as gerbils.

In laboratory settings, hamsters have been shown to respond to classical conditioning. They can learn to associate a neutral stimulus (such as a sound) with a consequence. But they struggle to learn to repeat behaviors in anticipation of a reward. Though you can teach a hamster tricks, it’s a lot more difficult than training a gerbil.

Are Some Gerbils Smarter than Others?

Not every gerbil is equally intelligent. Some gerbils are smarter than others, and this is clearly visible in their behavior.

So, why can intelligence vary between gerbils? Scientists believe that there are two main contributors to intelligence other than species. They are genetics and environment (otherwise known as ‘nature and nurture’).

What this means is that a smart gerbil has a higher chance of giving birth to smart babies. Though gerbils haven’t been tested, human studies suggest that genes determine 40-80% of intelligence.

But also, the setting in which a gerbil is raised can have an impact. Gerbils that are given lots of learning opportunities and mental stimulation will grow to be smarter.

According to The FASEB Journal, what a gerbil eats can also have an impact on its diet. Certain nutrients, such as choline (from eggs) and uridine (from beets), can enhance cognitive function in gerbils.

How To Teach a Gerbil Tricks

Because gerbils are good learners, it’s fairly simple to teach gerbils tricks. But you shouldn’t expect your pet gerbil to learn the same tricks that you’d teach a dog. A gerbil can’t walk on a leash or play dead, for example. Some simple tricks that you can teach your gerbil are:

Bear in mind that not all gerbils have the same level of intelligence. You may find that one of your gerbils picks up these skills quicker than the other. But with persistence, most gerbils can learn simple commands.